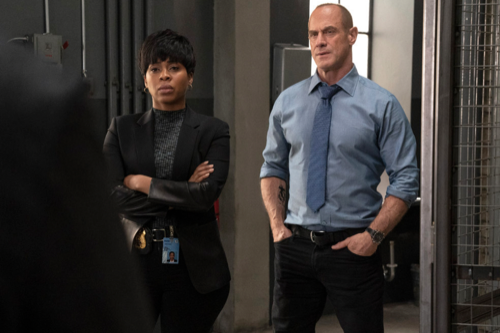 In tonight’s Law & Order Organized Crime the episode begins with Stabler and his kids in church, he looks like he is going to explode. Then we see Angela Wheatley, Stabler arrives at her place and she welcomes him. He tells the police behind him to cuff her and tells her that she is under arrest for the murder of Kathy Stabler. He reads her, her rights. Stabler then meets with Bekher who tells him that Wheatley is expanding his relationship with Joey Raven’s crew, bringing them in with a big new piece of business – that he is convinced is going to be a game-changer.

Richard tells Dana to look into the bug devices in the house, he found one. Ritchie is there and he tells his dad that the next time Raven comes after him, let him handle it. They meet with Joey Raven and his men, tell them Dana is their point person. Richard asks Joey if he spoke to his Russian friend. Richard says a year from now things will be getting back to normal, right now, at least for the next nine to ten months, only a fraction of the world will have access to vaccines. Rich countries control 90% of the supply and the third world, the developing world is desperate to get a share. They have a very small window to make billions of dollars.

Angela is in jail, she wants to speak to Angela – he doesn’t want to speak to her. Stabler and Bell introduce Richard’s new friend to the team; Stepan Komorav, he is Brighten Beach mafia, he is based in Brooklyn but has international reach – arms dealer. Richard wants to use him to peddle covid vaccines to the developing world. They have a pile of evidence on Richard but all of it is one step removed, so it is highly probable that he and his lawyers are going to slither out of it. This is their chance to catch him in the act.

Bell goes to see Angela, she wants to call her children, she says no. She asks for a blanket, Bell says no, it is policy, they don’t want her to hurt herself. Bell says she read an article about her a long time ago. Angela tells her that If she had a son, she would do whatever she had to to keep him safe, especially from the police.

Stabler finally goes to see Angela, she says she was insane with grief, rage, and uncontrollable. Richard told her that it was a targeted hit by police as part of a drug operation. Richard said the operation was led by him, Stabler. Richard asked her if she wanted him to die, the detective, said no, but she wanted him to suffer as she suffered. She wanted him to feel pain worse than death. She says she didn’t mean for his wife to die.

He says his wife never hurt a soul in her life. He told her that he promised her he would find the person who murdered her son and the whole time she thought it was him, which is ironic. He says Rafique worked for her husband, for purple magic, and her son was double-dipping, taking paycheques from Richard, but also took purple magic and made an inferior product and selling it on the street for a discount. He got caught by Richard, who dealt with him how he deals with anyone who rips him off, he shot him between the eyes. That is the truth.

Angela meets her lawyer, she doesn’t want to leave, she wants them to get Richard. She tells them that the only way to get him is to appeal to his ego. When Morales escorted her to the bathroom, she overheard. She wants to help them put Richard “Sinatra” in a cell for the rest of his life. Meanwhile, Dana hires two guys to sweep the house for listening devices.

Stabler and Bell track down Stepan Komorav, he is in a Turkish bathhouse. They get him but is not easy. Stepan says he will be out for two days, Stabler says five or six and he will be back to get him.

Bell and Stabler try to get a budget for their sting, they need manpower.

Richard finds out that Komorav is in jail, but there is another buyer, Silvano Gianluca, but little does Richard know that he is a plant. Silvano gives him a gift, an Oloid, the shape of his first logo. Richard buys it.

Richard calls Stabler, he wants to meet to talk about Angela. Richard says he knows that he is using Angela to get to him, and he doesn’t want her to become a casualty. Richard says that Angela is still in love with him and won’t help them. Stabler shows him a photo of Kathy and tells him that she wasn’t a vengeful person, but she will be the rent of him. Richard says he is sorry for his loss but stays away from his wife. Stabler gets up and says, ex-wife.

Dana tells Richard she has to show him something. Outside, Ritchie and Gina are shooting Dom Perignon bottles. Meanwhile, Dana finds footage of Gina at the club planting a listening device, Richard tells her that it stays between them.

Richard goes to see Ritchie with Dana and tells him that Gina is a rat, she is a cop and using him to get to them. He asks his dad what he wants him to do. Richard says take her for a romantic weekend and get rid of her.

Ritchie is away with Gina, Stabler is in his office looking at a photo with Kathy and he tells her that he is sorry. Stabler tells Angela that he had coffee with Richard, he doesn’t know she is there and he is not sure what he wanted.

Ritchie takes Gina to a lighthouse, he tells her it is a spot where he used to spend time when he was a kid. She turns around and he has a gun on her, she pleads with him, she tells him she has been undercover since she was 21, but she has real feelings for him. She walks towards him and grabs the gun, but he gets is back when Bekher shows up. Bekher tells him to go home while he cleans this up.

Silvano arrives, he is heading in an SUV and Stabler is inside, he asks him if he is ready to make a deal.