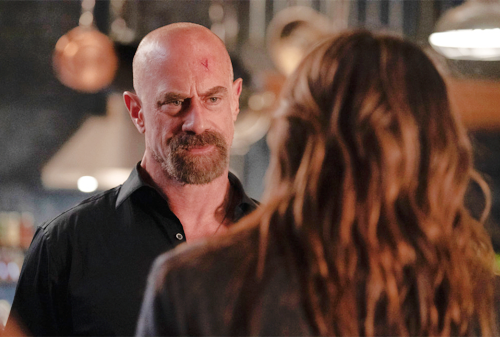 In tonight’s Law & Order Organized Crime episode, an influencer named Willa meets up with several guys at their house. They make videos and have fun before drinking and hitting the hot tub. Willa later posts a Tie Tok that she was raped. Liv is shown the video by her son at breakfast.

Liv goes into work and shows the team Willa’s video. They wonder what they can do. One of their young employees arrives for other business and tells them about influencers. Later, they meet Willa. She details the night and how she was raped. She didn’t call the cops because she wanted to join their content house. Her friend Kavon who went with her tells Liv and the others he knows she was raped.

The two guys that raped Willa ask her to come back to the house. She agrees to go back as Liv has a young detective inside undercover. The two men quickly come at Willa, telling her she needs to tell the world she is fine. They quickly start a live stream, forcing her to pretend it was all a prank. Liv and her team cuts in. They take the two to the station.

The two lawyer up quickly. Carisi wonders if Willa is being truthful. Liv defends her. They all meet. Later, the two men’s other closest male friend arrives to tell them his side. He has a hard time controlling the house, he tells them. They need to get proof. They learn the pair made another video where they laugh at the DA and admit they had sex with Willa, she wanted it.

Liv and the team file suit and bring them to court. After the proceedings, the men’s followers through things at Amanda and Carisi.

In court, Liv takes the stand and discussed why Willa took so long to come forward. Its not uncommon. The men’s lawyer questions why Willa went back to the house.

Carisi then questions Willa’s friend Kavon. Hey knows Willa was raped. The men’s lawyer attacks him after learning he actually didn’t see anything and just dislikes his clients.

Willa finally takes the stand. The lawyer rips her account apart. She leaves the court room upset. Later, the men’s friend posts a video admitting he knows his friends raped her. Carisi and Amanda see the video. He then deletes the video.

The next day in court, the judge is angry but denies a mistrial. The friend takes the stand. He confesses to hearing his friends talk about raping Willa. Their lawyer accuses him of lying because he liked Willa. Thee friend explodes and is then held in contempt. The lawyer for the men then tries to end the trial due to a lack of evidence. The jury comes back, acquitting the men.

Carisi does some digging. Some of the jurors made deals with the men to visit their content house. The two will end up with jail time. Willa is happy and starting a content house for survivors.

Liv continues working on her upcoming case against a sex trafficking ring.