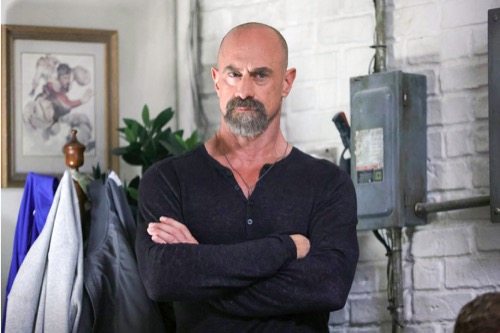 In tonight’s Law & Order Organized Crime, Elliot is undercover. He spends time with a madam named Deidra. They dance and drink in a bar alone. She is insulted when he references the women he saw the other night as prostitutes. She slaps him. He apologizes. She shares how she was once treated that way on a boat to America. One of the johns took her home and married her. A male stares in the window. Elliot goes to see who it is. Its a young man who tells Elliott he is his son. Elliot chases him off after being shocked for a minute.

Elliot heads home to wake his son. Talk to his mom and head back to the office. He tells the team about how a young man thinks he has found his dad as Elliot is posing as a criminal named Eddie Wagner.

Elliot helps Ayanna interrogate several men connected to the Kosta Organization run by Jon Kosta. Elliot heads to the gym working as Eddie when the young man from last night is there. He tells him to go.

Elliot meets back up with Deidra, Jon and several others. Jon cuts off a man’s tongue in front of all of them. He knows there is a rat among them. This is a warning. Jon puts Eddie in charge of finding the rat.

Bell and Elliot meet up at the Landry mat and talk quietly. Elliot warns her, Jon threatening a city official. He is planning something. Bell gives the official a heads up but he doesn’t care. He isn’t going to act scared.

Elliot goes back undercover. He tries to get rid of his kid but he starts sharing how Deidra was asking questions.

Bell gets called in. The city has settled the case involving her nephew and they are offering up a very large settlement. She doesn’t trust it.

Eddie meets with Reggie who shares that Jon has a large but dangerous job for him. Reggie is supposed to do it alone. Eddie offers his help.

Later, Reggie is taken in to custody while at a bar. Elliot goes back to his RV to meet his kid. His kid know he isn’t Eddie Wagner.