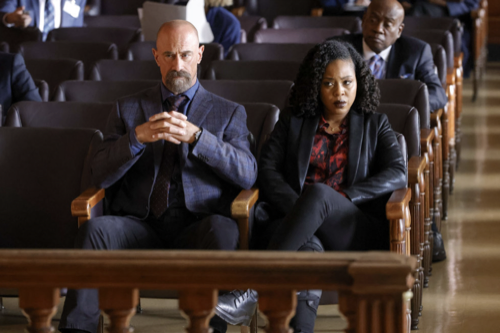 In tonight’s Law & Order Organized Crime, Elliot and the team are in search of their targets inside a building when the men take hostages. They enter into a standoff with shooting. Eventually, they get into the building. Some of the men have RPGs. The Sarge gets hurt. Elliot tells her she needs to leave. Jet radios into him, giving him a rundown of what is connected to the building. Elliot finds a tunnel. He is going in alone to find the men who took off.

Elliot loses Jet. Albi and another man are ahead. They get into a shoot-out. The other man runs ahead. Albi stays and shoots. His getaway vehicle leaves him. Elliot comes out moments after. Bell picks him up. They head to find the getaway vehicle which is an ambulance. They locate it and their suspect tries to get on a boat. They cuff him. He cannot believe Elliot is not Wagner.

Albi hides in a boat. After the homeowners leave e brakes into their house. A teenager comes out of his room. He sees the news reports and Albi and freaks out. Albi calls a friend. He doesn’t know Elliot and Belly are with her. They stake out and wait for Albi. He doesn’t show however because his friends send him a secret signal she is with the cops.

Bell gets a tip from Jet. Albi is on the run in a teen boy’s car. They figure out Albi was tipped off by his friend.

Albi and another man head to the docks. They get on a boat but cannot start it. Elliot is on the docks. He gets to Albi who grabs his own friend and puts a gun to his head. He barters with Elliot. He wants a helicopter. He asks if Elliot told Flutera. Elliot gets her. He made a promise of some sort.

Flutera shows up and Albi asks her to come to him. Elliot demands the hostage be let go. They agree to it. Flutera and Albi hug before they are cuffed.

Elliot lays in bed thinking of all the promises and even e just went through. He pretends to be sleeping when his daughter comes to it. Meanwhile, Bell has coffee with her girlfriend. She takes a phone call but cannot tell her girlfriend. It’s awkward between them.

Just as Reggie and his mom are headed for the witness program she is arrested. They bring her into court. She curses Elliot. She pulls a gun from her pant leg and shoots. Elliot is shocked. After, Bell and Elliot hug. She tells him it’s over. He says it is never over.

Bell meets with nova. She has proven herself and is now a VP. She also met a congressman who shared he has a relationship with an up-and-coming police sergeant. Meanwhile, Elliot shaves his beard whole trying to wash away all the awful things he had to do undercover. Reggie pumps gas out in the cold in the middle of nowhere.