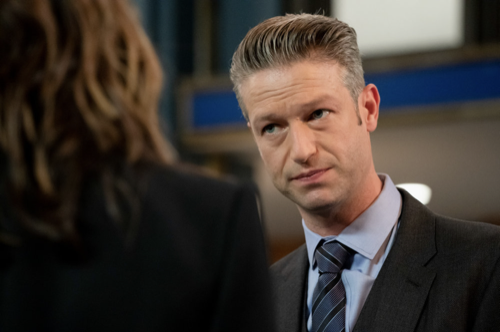 Tonight on NBC Law & Order SVU returns with an all-new Thursday, January 21, 2021 premiere episode and we have your Law & Order SVU recap below.  On tonight’s Law & Order SVU season 22 episode 6 “The Long Arm Of The Witness,” as per the NBC synopsis, “Carisi takes on a powerful judge when he inexplicably dismisses the rape case of a university student.”

In the courtroom, Valentina Palmer says she was groped by the defendant, Ian Hunter. And, even after he did that she took a ride home from him because she was afraid to take the subway. She fell asleep in the car, when she woke up she was at his house and that is where he raped her. It took her two months to make the complaint.

Judge Gallagher calls everyone back into the courtroom, he says in these he said she said cases, by definition there is usually reasonable doubt. He says he cannot destroy Ian’s future, it is legally insufficient to charge the defendant, so he is dismissing the case. Carisi tells Valentina that they are going to appeal.

The next day Gallagher goes on TV and announces his candidacy for Attorney General, he says the Me To pendulum has swung too far. On TV, in the background, behind Gallagher, Tum Burns, Ian’s uncle. The fix is was in before all rise. Gallagher and Ian’s uncle have known each other for thirty years. At the Office of Assistant AG, Benson and Carisi go to see Isaiah Holmes. Carisi tells him he is there about the past, Gallagher. Holmes says he worked in the kitchen, he really doesn’t know him well.

He says though, he wouldn’t be surprised if Gallagher and Burns covered for each other for years. Back in the ’90s, a girl was brutalized by Gallagher and it has haunted him because he didn’t do anything. The girl told him that Gallagher raped her while Burns held her down. She reported it, but those days, it got buried. Gallagher went to Harvard and became a judge.

Next, Benson goes to see the alleged victim, she says nobody cared back then. Gallagher invited her and April to a frat party. It was a setup. One glass of punch and she woke up with Gallagher on top of her, Burns looking over and laughing. She reported it to the college policy, but they said she should let one bad night define her whole life. She says she tried to fight Gallagher thirty years ago, now running for the AG, his boys will destroy her.

Office of President Michelle Dubois, she says they think the world of Gallagher there. Benson asks if she knows anything about him as an undergrad. There may have been a sexual claim against him. She says she doubts that they will find anything, the way complaints were handled back then. Although, Dubois did agree to look into April’s claims about Gallagher.

Tutuola goes to speak to the campus security, he mentions the rape and the officer tells him he can’t help him. At the office of Deputy Chief Christian Garland. Carisi tells him that Gallagher is a predator and Benson tells him that the witness is credible. Isaiah is there, and just then, Gallagher walks in and he tells Carisi that if had questions he should have spoken to him. Gallagher says they are biased against him.

The campus officer calls Tutuola, he went through some old boxes in his garage and found a bunch of old memo books, and these other two victims he found, he didn’t get those from him either.

Benson and Tutuola speak to Francine, another one of the other victims, she says she was assaulted by Gallagher. She knew what happened with April who reached out to her after her incident. And his conduct with her would definitely speak to character. Rollins and Kat go to see another victim, Carmen, she is a court reporter, her dream is for someone else to type while she testifies against him.

Calhoun is defending Gallagher and they have him on TV with ten women who he mentored and they are all now lawyers themselves. At the law offices of Winston & Knoll, Tutuola and Rollins speak to a new lawyer, Maya, she didn’t sleep with him but he did rape her as well. She is afraid that if she comes forward her partnership will be at risk.

Carisi tells Calhoun and Gallagher that they will drop the case if he drops out as AG and the bench. Gallagher threatens to have Carisi disbarred and says he is so far gone that he doesn’t know his career is dead and buried.

Carmen tells Carisi and Benson that she can’t testify. If she does, she will lose her job. Benson tells Carisi to not let these bastards get to him, he’s got this.

In court, the other women testify and Calhoun discredits one after the other, and she gets really mean. April completely breaks down on the witness stand. Carisi afterward tells Isaiah that he should testify, it will help.

Back in court, Isaiah is on the witness stand. He says he overheard Chip bragging about what they did to April. He says he confronted Gallagher who said that if he revealed it to anyone he would tell everyone that he was not just a half breed but a home, and he knew the school trustees, he could kill his scholarship. He is testifying now to try to right his moral lapse that haunts him until this day.

Gallagher follows Isaiah to the washroom and tells him off, little does he know that he is being taped. Isaiah taped him, and the judge allows it. Gallagher takes a deal and gets one-year of house arrest.

Back in court, Gallagher pleads guilty. The judge is not satisfied with the one-year house arrest. She tells Gallagher that he abused his power, so in the interest of the women that he abused, she hereby orders him to spend his one year sentence in a jail cell.

Benson meets up with Calhoun in the elevator, asks her what she thought she was doing. Calhoun says the fix is in, and if she keeps marching on the wrong side, she is going to be marginalized her whole career.