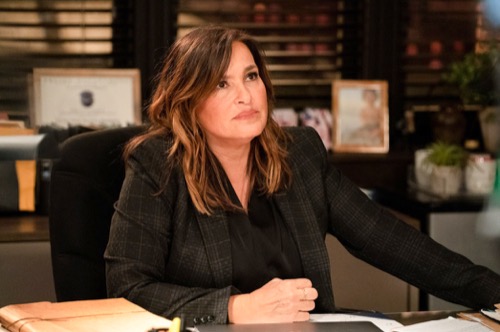 Tonight on NBC Law & Order SVU returns with an all-new Thursday, February 25, 2021 episode and we have your Law & Order SVU recap below.  On tonight’s Law & Order SVU season 22 episode 8 “The Only Way Out Is Through,” as per the NBC synopsis, “Benson helps two sisters get closure from a harrowing childhood assault; Kat’s cousin reaches out for help.”

In tonight’s episode of The Blacklist, we see two young girls laying on the basement floor, one is counting to five, a man is seen walking up the basement stairs with a gun. Then we go back to 2014, a young woman, Nora, is on trial, she says that a man raped her. 2021, a woman named Lilly is being raped. Lilly is Kat’s cousin, she calls her, and Kat heads over there.

Annika and Amani Coleman show up at the station, Benson remembers the case twenty years ago, one was raped and they were held at gunpoint and the other was forced to watch. Tutuola tells Benson that they are in the station now, their mother died from COVID and it brought some stuff up, and he was supposed to meet with Carisi regarding Jimmy Gunn’s parole hearing. Benson says she will talk to the sisters. Benson is surprised that Gunn is up for parole already, he raped four women. Benson says she needs a few minutes, she wants to go through their file first before meeting the girls.

Benson gets a call from Noah’s school, somebody at his school test positive for COVID and he has a fever. She asks Rollins to speak to the sisters. At Tre Sorelle, Kat is speaking to Lilly who tells her about her first date for hell with Xavier Garcia, the billionaire. She says he ordered fancy sushi and wine, and she told him to stop and slow down, but he continued anyway, pushed her into a wall until he was finished. Kat tells her no matter when in the process that this happened and she told him to stop and he didn’t, this is rape.

Rollins meets with the sisters, she tells them that Benson remembers their mother and it is shocking. They went through her storage locker and found articles about Darrell Clark, he never confessed to assaulting them, the deal he made said that he couldn’t be prosecuted for their assault. They ask if there is anything they can do, they want him to pay for what he did to them.

Tutuola is at Carisi’s office when Nora walks in, she tells Tutuola that just because she is there doesn’t mean she is doing this. She says she has night terrors, then asks Tutuola if Jimmy will be at the parole hearing, he says yes, and he will be there too. She says she is trying to get on with her life. Tutuola says it helps tremendously if a victim shows up at the parole hearing, they need to keep him behind bars. Nora doesn’t want to do it.

Kat tells Benson about being assaulted by Xavier, Benson says he is a smart guy with an army of lawyers.

Jimmy’s chaplain arrives at Carisi’s office and tells him and Tutuola that he wants to see his victims before the parole hearing so can apologize to them. Tutuola tells him that the victims are not buying what he is selling.

At Truman Houses, Annika and Amani Coleman are going to meet with Darrell Clark, he agreed, he is getting transferred to federal prison for smuggling drugs and is probably hoping that this will delay that. Annika wants to know why he did that day, why he choose her.

Lilly is meeting with Kat and Carisi, he says it will help if she can get Xavier to make an admission. Xavier texts her, he wants to take her to lunch.

Sing Sing Correctional Facility, Rollins is there with Annika and Amani, Annika starts panicking because she thinks she sees a rat like in the past when they were locked up in the basement. Amani says it’s funny, she doesn’t remember any rats. Rollins reminds the two that they are in control of this situation, if it is too much, they stop. Darrell walks in the room says he is there and asks them what they want.

Duane Park, Tribeca, Tutuola goes to see Nora. He tells her that the chaplain came to see him, Jimmy wants to apologize to her. Tutuola has letters that Jimmy wrote to her from prison, but were never mailed. He says knowing Jimmy, he is just trying to work her. Tutuola is about to leave and she says she will read them, she wants to know what he wants to say.

Darrell says he didn’t rape Annika and he didn’t expect to be ambushed. He says he only does white girls, he would never do that. Annika says for three hours he took away her childhood. Annika wrote in her diary back then after the rape, she reads it to Darrell. He says it sounds like his M.O. and it’s a possibility, but he was drinking a lot back then. He tells Amani she got off easy, she says she didn’t she had to watch. Alarm goes off, there is a brawl in the yard and a lockdown is initiated, Darrell is pulled out of the room by one of the gaurds.

Carisi and Tutuola are walking down the street, they are talking about Nora, she agreed to go see Jimmy in prison.

Office of Chaplain Blevins, Nora is there and meets with Jimmy, Tutuola and the chaplain are also there. Jimmy asks her if she has anything she wants to say to him. She says he acted like a good guy, she thought he was so nice and he took trust away from her. He says he has a hard path up to now, and he is asking her for her forgiveness. Nora says she is not ready, he says he is truly sorry. Tutuola calls Carisi and tells him that Nora is falling for Jimmy’s apology act. Tutuola tells Nora that they really believe that Jimmy is playing her.

Affamata, Carisi and Kat are sitting at one table. Lilly is meeting with Xavier at the bar. He asks her why she is upset with him. She says it was when they were making out, she said slow down, then stop and he didn’t listen. He says those times are awkward. She says there was a spark between them, he agrees. She says they went too fast, he says he would have stopped when she said stopped, and now he realizes she did say that but he was so into her that he couldn’t stop and he is sorry for that, so very sorry. He tells her he is so turned out, she says her too. Kat comes around the corner and arrests Xavier.

Annika and Amani get into an argument, Annika tells her nothing happened to her. Amani says her mind is always racing, guilt and rage. Amani says that their mom thought Annika was the hero, sometimes she wishes he raped her instead.

Parole hearing room, Fishkill Correction Facility. Jimmy says he made an offering to his victims to apologize. He starts to use Nora’s words to get himself off. Nora feels stupid, Jimmy was looking for his words and just copied her. Tutuola says the board sees a prison success story, unless she tells them different.

Nora speaks to the board, she says she was fooled and conned by Jimmy who raped her. The hatred, the anger in his eyes, he wanted to destroy her. She may never be whole again, so he can study the bible the rest of his life, but he will never change. And, he will rape more women if he gets out.

Rollins is still with Amani and Annika, lockdown is over, the guard goes back to get Darrell. Amani says she is thinking about that day when their mother met them at the hospital, she looked at her like she did something wrong. Annika says their mother felt pity for her. Amani says she feels like now is the first time Annika knows she was there. Rollins steps in and tells them that they were kids, it should never have happened and it was Darrell’s fault. Darrell is there, but the girls decide they don’t want to speak to him anymore.

Lilly tells Carisi and Kat she changed her mind, it is her decision and she doesn’t want to be talked out of it. Kat tries to go after her, but Carisi tells her it is over, let it go. Kat goes anyway, says she just wants to try. Lilly tells her Xavier is not a criminal and the two have a real chance at a relationship now.

Benson is back in the office, Tutuola and Rollins update her on the cases, she thanks them for covering her.