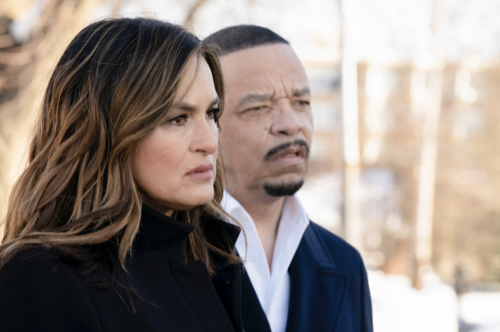 Tonight on NBC Law & Order SVU returns with an all-new Thursday, April 8, 2021 episode and we have your Law & Order SVU recap below.  On tonight’s Law & Order SVU season 22 episode 10 “Welcome to the Pedo Motel,” as per the NBC synopsis, “The SVU must contend with an angry neighborhood watch group when a girl goes missing near a building that houses several sex offenders.”

In tonight’s Law & Order episode, the episode begins with us seeing a young man, Lonnie, arrives at work late and his boss says he is going to deduct his pay. Outside, a motorcycle gang drives by and tells a group of men they have their eyes on them. A young girl that works with Lonnie is leaving the pizzeria and he offers to work her to the bus stop and she says no. Lonnie’s boss tells him to grab the garbage on his way out, he does and leaves for the night. We see the young lady crossing the street.

We then see a man, watching the movie Bad News Bears and he asks St. Anthony to stop his sinful urges. We see another man, tracing his finger around a picture of a woman in a magazine. Then, we see the young lady, she is jumped by someone on the street and she struggles, screams, and tries to get free.

The girl was 17-years old, her name is Seronda Zajmi and she is missing, she never made home from her job at the pizzeria. There is a building a block away from the pizzeria and it is nicknamed the pedo motel because five sex offenders moved into the building. Benson tells them to concentrate on finding the girl. Her parents say she has no reason to run away, she just got a scholarship to Brown’s University, and her cousin owns the pizzeria.

They visit the owner and he says he knew Lonnie was a convict and he was going to let him go as soon as he found a replacement. A few days ago he received an anonymous call telling him that Lonnie lived in the pedo motel. He goes on to tell Tutuola and Rollins that Lonnie offered to walk Seronda to the bus stop she said no, then he went on an hour back and came back late, out of breath.

Carisi shows up, the mayor’s office wants Seronda to get the same courtesy as anyone else. The security footage is checked in the neighborhood and Lonnie gave a false alibi, he didn’t go back to his apartment. Benson gets a message, they found something. Kat shows them where Seronda’s body is laying on the ground, she is dead. There is a head wound that is shallow, maybe from brick or a rock. There is no DNA, not even under her nails.

At hotel Biarritz, there is a protest and they have been there all morning. The team goes to see the five pedophiles that moved into the building, they all have an alibi, they say they were in their apartments. Tutuola tells Lonnie that he knows he is lying, Lonnie, says he forgot that he took a walk to the park. Tutuola tells him that he doesn’t care what he was doing, he just wants the truth to try to help him. Tutuola tells him that he doesn’t have a job anymore and they are going to take his DNA. Tutuola tells Benson that Lonnie changed his alibi. Outside the building, the crowd is getting noisy. Tutuola gets a call, they found a brick with blood and hair on it.

Back at the precinct, Lonnie is the only suspect they have, if he had DNA under his fingernails, he washed it off. Kat finds security footage from the junkyard where Seronda’s body was found, a man with the same jacket as Lonnie was seen running from the scene. They get a call to Pedo Motel, there is a fire, inside Lonnie is dead, he was lynched. The fire started from Lonnie’s room and gasoline was used everywhere else. They went in to kill Lonnie. Sergeant Khaldun is gone to talk to Lonnie’s family.

Saint Michael’s Hospital, the team goes to speak to the other people who lived in the motel. They heard loud voices, screams – one of them was named Edouardo. They also heard the motorcycles, they were revving their engines.

Dyckman Knights Headquarters, Benson, and Tutuola knock on the door and tell them they want to speak to Elvis, the leader. They go inside, Elvis says they aren’t going to find anything, he and his crew were playing a card game when the fire broke out. Elvis shows them a box on lamp posts, LAPD installed a month after they moved in, the video footage proves they were there and not at the fire. Elvis was telling the truth. There are three guys on motorcycles heading to the motel, but it is not Elvis’ crew. Kit found a lead, Edouardo Alvarez, he is a motorcycle gang and lives in the neighborhood and one of the victims from the fire overheard someone call out his name.

Rollins shows Eduardo a photo of Lonnie, after he was lynched, on his phone. He says it wasn’t his idea, it was Louie and Juan, cops do nothing, they have to take care of their own. Eduardo says they were inspired by Elvis. They got the DNA from Seronda, it did not belong to Lonnie, they killed an innocent kid.

Lonnie was on a subway when Seronda was killed, he didn’t trust Tutuola enough to tell him. He assumed Lonnie was guilty, he was on him from the jump, he should have known, so many kids like him are done wrong. And now, he has to tell Lonnie’s family that they don’t think he killed the girl. Lonnie’s parents tell Benson and Tutola that the day Lonnie turned 18, his girlfriend’s stepdad called the police on him, he didn’t like that Lonnie was black and she was white. Her step-father, Roy Eastman, is a parole officer. And his brother is a Nasa County detective. Lonnie’s lawyer told them that it was better for Lonnie to take a deal. Lonnie’s father says it doesn’t matter what they do now, Lonnie is gone.

Home of Roy Eastman, Khaldun, and Rollins are there to speak to him about Lonnie. Roy says he sheds no tears. They ask to speak to Lonnie’s ex-girlfriend, Roy says no, and what happened to Lonnie was just.

Rollins says they have to run all of Roy’s parolees’ DNA, it’s a long shot, but worth a try. They have a guy in custody, Antonio, they believe it may be someone who is related to him that did it. He brings Kat to a basketball court where Sam Johnson is playing basketball, they tell him that he is under arrest.

Sam admits to being there, he says Seronda wouldn’t shut up, he hit her with the brick to shut her up, it was an accident. It wasn’t his idea, he did it for his half-brother, Antonio who had to do it, his parole officer told him that if he didn’t do it and frame Lonnie, he was going to send him back.

Roy is picked up, he screams for someone to call him brother, Tutuola tells him he can call the pope and it is not going to help him. They got lucky with Eastman, they have texts and cash withdrawals that confirm that he was involved.

Rollins gets a call, in front of Carisi, it was her father’s doctor, he had a stroke and he is all alone. He tells her to get on a plane and go to Atlanta, she needs to go.

At Lonnie’s service, his parents thank Benson and Tutuola for clearing their son’s name. Seronda’s parents show up as well, Lonnie’s mother says their children were killed for no reason. Tutuola says they were killed for hate.