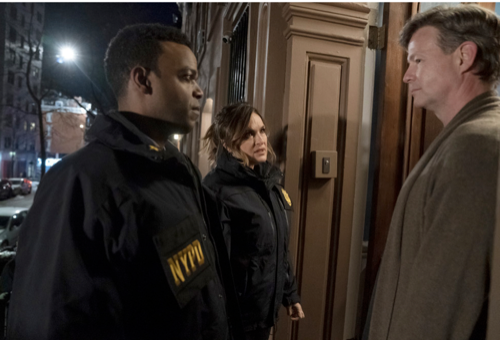 Tonight on NBC Law & Order SVU returns with an all-new Thursday, April 15, 2021 episode and we have your Law & Order SVU recap below.  On tonight’s Law & Order SVU season 22 episode 11 “Our Words Will Not Be Heard,” as per the NBC synopsis, “A high-profile activist suspects her sister has been kidnapped by a hate group; Garland and Benson push for change with NYPD brass; Kat gets some good news.”

In tonight’s Law & Order episode, the episode begins with Benson being in the office on a Sunday and Garland apologizing and telling her that he will keep it brief. He says he got a heads up from the mayor’s office on the Jayvon Brown case. Jayvon is bringing in a new legal team. If this goes to trial both the department and Jayvon’s team will scapegoat her. Aside from the warning, she asks him if he has any advice, he tells her to get a lawyer.

A woman is in a wheelchair singing for money, a young boy named Forest puts money in her basket. Tutuola is walking down the street with Kat, he tells her that she is getting a promotion to detective, Olivia and Phoebe are meeting them to celebrate.

The woman in the wheelchair is going down the street with her partner who has a camera when Forest, and his mother, and the young man offer them a ride, they say they have a handicap assisted vehicle they use for their father and they can drive them home. They agree, and once in the van, a man is there, he pulls a gun on them and tells the one girl to get down on her knees, pull down the other girl’s pants and “do whatever it is you people do.”

Benson thanks the captain for meeting with her, she tells her that she is worried the department is going to hang her out to dry. She tells Benson that she is going to be cleared of all wrongdoing. Benson says she has taken what she has said very seriously, about this being a reason for the change. She goes on to say that Jayvon’s team wants to change, they don’t want money.

Benson tells Tutuola that they dropped the investigation, he asks her why she isn’t happy. She says because there won’t be change. He says his mother always told him that nobody gives you anything, if you want it, you have to go out and get it.

Nicole comes in to see Benson with Carisi, she tells her that her sister is missing. Also, she has been getting threatening messages on her cell phone, “we are watching you,” and “we can take you whenever we want.” She thinks someone targeted her sister, Sara, to get to her. Sara has a girlfriend, but she is very private about that. Her gut tells her that this isn’t about Sara.

At Sara’s apartment, her roommate asks if Tutuola and Kat have a warrant. She ends up giving some information, she says Sara’s girlfriend is white, her name is Alicia and she is in a wheelchair, there is a lot going on. They get Alicia’s number from her and an ENT answer asks if she is family and we see Alicia on the ground.

In the hospital, Benson and Kat ask Alicia questions. She says a white couple, with their son Forrest, offered them a ride, they had a wheelchair van. They drove a couple of blocks, they dropped off the family and the kid, the side door opened, a man came in with a gun and they made Sara do things to her sexually, they taped it and then they threw her out and kept Sara. They said if she wanted to Sara again there would be a video.

Benson tells Nicole that the perpetrator taped the two doing sex acts and said they would post the video. A hate group, Crew 2032, out of Jersey posted the video and says they are going to auction off Sara and stop the bidding at midnight; torture, rape, and the bidding start now.

Benson tells Nicole about her sister who is being held captive. Carisi assures Nicole they are working on the case. Where ever they are holding Sara, they had a green screen in the back, they have no information and they don’t want to tell the public because it will send more feed to the auction.

Tutuola tells Benson that this group is trying to make a name for themselves. Benson gets a call, she is due at a disposition for Jayvon, she has to go. Tutuola tells her to talk fast.

Nicole asks Garland how this happens. If there is any way they can pull units from other things for this. He tells her that he has faith in Benson. Then Garland gets a text, he may have something. At a construction site, Tutuola and Kat are looking for a Garret Packard, an angry white man in a plaid shirt, he has a pickup truck with a confederate flag.

At the law offices of Robinette, Ellis, and Marron – Benson arrives, Jayvon is there and tells her to have a seat, the lawyers are gone to have a coffee. He says he heard she is going to be exonerated, he congratulates her. She tells him that off the record, they both want the same thing. They both want the department to own up to their mistakes and make changes moving forward.

Packard is actually an officer, they bring him in to look at the video of Sara, he recognizes the guy but he doesn’t know where he is. He says he has nothing in his notes about a family. Tutuola tells him that sometimes we know things that we don’t put in our notes. Packard says the wife came in and had a beer with him, he told her she could do better. He looked in her purse when she went to the washroom. Meanwhile, Alicia recognizes the woman who took them, it’s Molly Anderson and she is married to Rick Anderson, a freelance IT consultant and Alicia recognized him too. Molly is not talking, Benson tells them to call Carisi, they have three hours.

Alicia, Benson, and Carisi watch the TV, Nicole is on advocating for her sister who was kidnapped. She says she is worried that the NYPD is not devoting enough resources to find her sister. Benson tells Carisi that this is not helping, he needs to communicate that to Nicole.

Bad news, the live streaming has started again and they are watching Nicole’s interview. They pull a gun on Sara, she pushes the camera past him and you can see some of the basement they are in. Molly sees it, Benson asks her again where they are. Benson tells Molly this is a federal hate crime, if they kill Sara, she gets the death penalty. She gets a needle and her son will grow up in foster care. Benson tells her to call her husband and call it off. She says she has no way of getting in touch with her husband, she can page the other guy in sos, he is her brother. Molly talks to Steve, she overhears her husband shoot her brother and call him a traitor.

The NYPD is able to trace the phone, they have one hour to find Sara. The team goes into the neighborhood and checks houses where Rick Anderson services. A cop comes up to Tutuola and tells him a neighbor heard gunshots from a house. They head over there right away, inside, they find Molly’s brother, he is alive. Benson tells him to talk or he is going to die, he tells her she is a cop, she won’t let him die.

She cancels the EMS and tells him he is going to die on the floor if he doesn’t talk. Rick is live streaming, he sees the cops in the stairwell and lets Sara go. They then go in after Rick. They arrive in the room, Rick stands up and puts his hands up in the air. Outside, Sara tries to jump Rick and calls him an SOB. At the hospital, Nicole runs into the room where her sister is and tells her that it is all her fault. Alicia is in the room as well. Nicole thanks Benson and Carisi, she tells them that she didn’t make it easy and she is sorry.

Garland tells Benson that he got a call about Stabler, he is running rogue at Organized Crime, he wants her to keep her distance, he can’t afford to lose her.