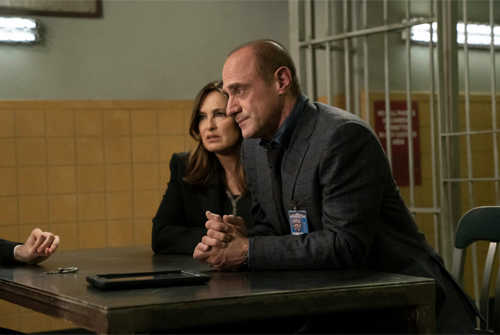 Tonight on NBC Law & Order SVU returns with an all-new Thursday, May 13, 2021 episode and we have your Law & Order SVU recap below. On tonight’s Law & Order SVU season 22 episode 13 “Trick-Rolled at the Moulin,” as per the NBC synopsis, “The SVU searches for three women suspected of drugging and robbing wealthy men; the case leads to personal connections for both Benson and Kat.”

In tonight’s Law & Order SVU episode, the episode begins with Benson, who can’t sleep and picks up her phone, then listens to a message from Stabler, “Liv, he knew, he was there, he activated the bomb from across the street. It Sacha Lenski, he knew it was Kathy getting into the car.” Benson tries to call him, and he doesn’t pick up, she leaves a message and asks that he call her back.

We see a Xavier Garcia, billionaire, in a bar with two women, they are dancing and one of the women slips something into his drink. At Hotel Bordeaux they continue to party. Another woman arrives at the hotel and slips him some more drugs, then asks him for this pin on his credit card. They steal his credit card and rob him of his jewelry. The next morning, the hotel maid and the manager find Xavier dead and strapped to the bed.

Benson and Kat are on the scene, Tutuola arrives and tells them that Xavier was tied to the bed and there were drugs involved, looks like a party gone wrong. Kat’s cousin, Lilly, knows Xavier, Benson tells her to bring her in.

Tutuola and Kat speak to the manager, he says they were high-end girls. He says this is not the first one this month, but their others didn’t end in death. The men don’t report it because they are found naked the next morning tied to a bed and most are married.

Kat finds Xavier’s waller, credit cards, and cash are gone, but there is a receipt from last night from The Silver Fleece so they head over there. The bartender tells them that it was the biggest tab ever. The blond was there before Xavier, she knew the second girl and they got him sauced. They ask to see the security footage.

Xavier’s cause of death is acute intoxication. Besides the alcohol, there were Fentanyl, Oxy Codeine, and MDMA; fairly common street drugs. Benson exits the morgue and Stabler is there, he tells her that Sacha Lenski saw Kathy. She tells him to hand over the information, he needs to stay out of the case, go home, have a meal, and be with his kids. He says he hears her but looks so disappointed. He asks her if they are good, she says she hopes so.

Hotel Moulin, another victim, Paul Landy, same as Xavier. The night manager id’d the blond woman from the security footage at the bar, he says there was another woman and she was Asian. Benson turns and sees Hotel Moulin’s name on the door, this is where Simon (her brother) died she says. At the time they said that Simon’s death was an accident. Both Xavier and Paul od’d on the same drugs. Simon was heroin and Fentanyl. Benson wants to speak to the responding officer for her brother’s case, she thinks they missed something.

Detective Fernandez is in the office with Benson and Carisi, she brings up her brother’s case, Fernandez handled the 911 call. He says the guy was already gone when he got there, he had his wallet on him with cash, he is no Landy or Garcia. Benson tells him that it was her brother, he says he did everything by the book, it was what it was.

Later, Benson is thinking back to when she was with her brother. She listens to a voice mail that she left her brother, she was upset that he didn’t show up for a planned meeting with her, she told him not to ever call her back. Benson is convinced her brother was murdered. She got into his phone, she traced his last call, he called Edward Buddusky, and she has an address to a brokerage firm downtown, she is going there.

At the office of Edward Buddusky Sullivan Wyatt, Kat and Tutuola are there and speak to Edward who says he heard that Simon od’d. He says he was his sponsor, he has been sober twenty years. Simon reached out, said he was depressed and was thinking of using. He said he was going home to Jersey, he was going through a rough time. Tutuola gets a text from the manager at Hotel Bordeaux, he has a buddy who works at another hotel, they found another guy od’d and EMTs are on the way, he was with three women, one white, one black, and one Asian.

Tutola and Kat head over to the hotel, Dr. Walter Lindeman is still alive but they have to rush him to the hospital.

Benson tells Carisi they found a live one, he gave himself Narcan at the scene which is probably why he is still alive. He won’t talk, he asked for his lawyer.

Lindeman is in the office with his lawyer, Benson, and Carisi. Lindeman recognizes the girls, he says they wouldn’t hurt him, they are friends. Lindeman says he has a contact for one of the women. Kat and Tutuola head right over and arrest Piper Thomas, she is a former club dancer from Montreal with priors for possession, soliciting, and unlawful use of a credit card. Tutuola says in the van that Piper was trying to get away in, they found ten thousand dollars in cash, six men’s watches, three college rings, three burner cells. Kat went through Piper’s tablet and found a folder with photos of the victims, one photo is with Simon and Edward Buddusky with Piper. Edward lied.

Carisi, Benson, and Tutuola head over to Edward’s office, Benson shows him the photo of him with Simon and Piper. He says he is a good samaritan, he called 911 and the drugs were not his. He says he knew Simon from high school, he was in a bad way, he was looking for a job. They went for coffee, he offered to loan him some money. He felt bad for him, he went to the bar with him. He said he was supposed to meet his sister for lunch but he was too embarrassed to show up.

He couldn’t help Simon, so he thought he would show him a good time, he called Piper and she brought a friend, a black girl. He says they ended up at a motel, they brought the drugs, he passed out and when he woke up, they were gone and Simon was ice cold on the bed, blue. He put his clothes back on, he left the room. He called 911 but he was dead. He has a wife, kids, the only thing he can say is that Simon died happily, he had one last good time.

They have all three women, Piper, Despina, and Jade and they are all I’d. Carisi says now that they have the three of them, it is time to play let’s make a deal. Piper and Despina are going to testify against Jade. The morgue test results find that all the men were drugged with Purple Magic. Benson and Tutuola go back to Hotel Moulan. Tutuola gets a video from Kat, it was pulled off Piper’s Snapchat. In the video, Jade is asking for the rest of her stash, and Simon is seen laying down face down.

They also see a guy that was with Piper, his name is Felix, and he was with her when they picked her up initially and he pretended to be her driver, but he is her dealer. They go back to the station and show Jade the video, Benson tells her she is not getting out any time soon. She is looking out for Felix, but he is not looking out for her.

Jade gives up Felix, they bring him in and tell him that his Purple Magic killed men. He says he is a delivery boy, it is not his drugs. Felix agrees to go undercover and be wired, he leads Tutuola and Benson to the dealer.