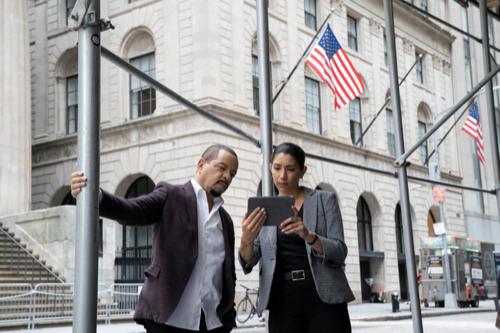 Tonight on NBC Law & Order SVU returns with an all-new Thursday, September 23, 2021 episode and we have your Law & Order SVU recap below. On tonight’s Law & Order SVU season 23 episode 2 “Never Turn Your Back On Them,” as per the NBC synopsis, “The search for a missing witness leads Fin and Kat down a dangerous path.”

Kat finds Rosa, she says she got calls and they said if she doesn’t shut her mouth they are going to kill her son. She wants to leave. Kat begs her to let them take care of her, she tells her to stay there and she will have police protection, she will be safer.

At the prison, Fin finds out that he is too late, Paulie Banducci was jumped and he is dead. Jenna’s parents are not answering the phone, Rollins arrives at the house, her parents arrive at the same time and say she is upstairs sleeping in her room. Rollins sees blood on the floor, she kicks down the bedroom door and Jenna is not there. Jenna’s bike is gone, but they found her cell phone.

Howard is out of prison, he is coming down the steps and he says he is heartbroken and the SVU tried to frame him. Mc Grath gets a call from Joe and tells Benson and Garland that he just saved their butts. When Joe “Q” was at the party, he gave Jenna his number and it paid off, she messaged him. “Q I need to see you” from a burner phone. They track an address for the phone and get a lead. Joe and Rollins head there with backup, Kat and Fin are at the back of the house, and Kat is shot.

Fin stays with Kat and calls it in. Joe and Rollins go up the stairs looking for Jenna. Joe finds Jenna out on the roof and tries to get her to come back in. Joe goes out on the roof, Jenna says her father will kill her if he finds out anything. Joe tries to convince her that her father wants her safe. Joe takes off his belt and tells her that his father used to whip him when he was drunk, he knows how it is.

One day he had enough, he tried to stop him, his father put him in the hospital, and was arrested. He vows to protect her and teach her how to protect herself. He pulls her back up the roof to safety. In the ambulance Kat is slipping, Finn tells her she is going to tell her a joke and she has to stay awake for the punchline. He holds her hand and tells her that she isn’t going anywhere.

Outside the house, Joe tells Rollins he made his old man seem worst than he is. Back to the ambulance, they are losing Kat and have to use paddles to bring her back. Finn is shocked and calls out her name. Kat is finally at the hospital, Finn shouts to the doctors to take care of her. Benson arrives and he says they were ambushed, Kat was shot and her heart stopped in the ambulance, he feels horrible

Jenna is in the station with her parents, and her father puts himself right in the middle of it and Jenna looks afraid to talk. Joe tells her parents that Jenna ended up in the hospital, something happened. Her father tells them to get up, they leave.

Carisi finds out that Kat is in surgery, Benson tells him about the killings, Carisi says Howard’s lawyer filed a motion to dismiss. Rollins says Jenna still says nothing happened with Howard. Benson gets a message, Kat is out of surgery. In the hospital, Kat tells Finn that death is overrated. She says she remembered Carisi had no regrets about no longer being a cop. She asks Finn if she is where she is supposed to be. She says the SVU is always there too late. Finn says it is about getting the bad guys off the street. She says there has to be a way to be more proactive. Finn tells her that it is not the time to make decisions, just get some rest.

Finn calls Benson and tells them the surgery went well, Kat is just a bit loopy. Joe walks in and says they finally have something on Howard. Jenna’s mother saved one of her dresses, Howard got Jenna pregnant when she was 15. Benson and Joe meet with Jenna’s mother in private, she wants this to be kept confidential. She tells them that her radar went up when Jenna started spending a lot of time with Howard. On her fifteenth birthday, Howard took her to a restaurant, they let her go.

Something happened, she could tell that Jenna had been drinking, her makeup was a mess. Later, she went into the laundry room and took her dress, it was stained. She put it in her closet and forgot about it. Six weeks later she found a positive pregnancy test in the trash. A car picked her up and took her to the city, when she returned she was white as a ghost and stayed in bed for two days.

Carisi and Benson meet with Howard and his lawyer. Howard is shocked that she had an abortion, he says there is no way it is his, he always pulls out. Howard and his lawyer start arguing, the lawyer says he was protecting him. Howard says he did it, he brought Jenna for the abortion.

Howard claims that he was just a puppet, the lawyer organized the abortion and ordered the killings. McGrath asks Benson if there is any chance that the lawyer will take a plea.

The lawyer offers a deal, in his line of work he knows where a lot of bodies are buried.

Carisi, Garland and McGrath get calls. Howard is the sacrificial lamb, the lawyer is not going to go down for anything. Kat returns, with a cane and asks to speak to Benson. Kat says this is not about being shot, after last year, she thought things would change but they haven’t. Benson tells her to stay and fight with her, they need voices like hers. Benson says she believes change is coming. Kat says she has to get out before she gets in too deep, she can’t stay. Benson says ok, and her door is always open.

Carisi is with Rollins, he says he is taking their relationship seriously, she says she is too and nobody else needs to know about it yet.

Garland is in his office and he is packing, Benson asks him what is going on. He says he felt like he was let out to dry, nobody sees him as a team player. So, he has decided to leave before they let him go.

McGrath goes to see Benson and says they need to focus on the real rapes. She tells him that’s he is not going to turn her back on any victims. He tells her that while they are trying to fill Garland’s position she will report directly to him.