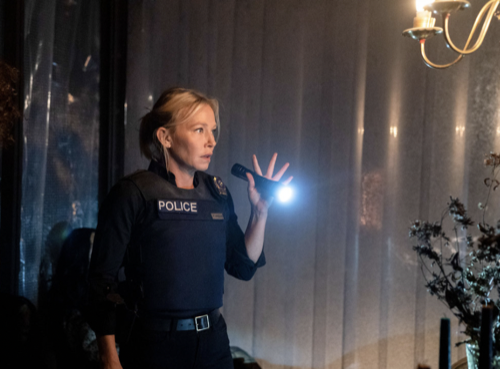 Tonight on NBC Law & Order SVU returns with an all-new Thursday, November 4, 2021 episode and we have your Law & Order SVU recap below. On tonight’s Law & Order SVU season 23 episode 7 “They’d Already Disappeared,” as per the NBC synopsis, “When a teenage sex worker disappears, Rollins and Velasco find a key clue in a pile of neglected missing person reports.”

In Tonight’s Law & Order SVU episode begins with two sisters who meet up, one is on the streets, Tania, and tells her sister, Daria, that she has to fly. She goes into a restaurant and gets her jacket, a man then asks her why she is in a hurry and she says she has a date.

Later, we see her running out of an alley, she hides beside a dumpster and is crying, she calls her sister and tells her that he raped her, tried to kill her, and choked her. Then we see the man catch up with her, he has on blue rubber gloves, he puts his hand around her mouth and tells her to scream all she wants, nobody cares.

Fin asks Benson how McGrath is being, she says respectful for the time being. Daria Cruz shows up at the station, she thinks her sister is in trouble. Daria plays the phone message for Benson and Rollins. She says she was studying and didn’t answer it until this morning because usually when Tania calls it is for drug money. She says she saw her sister last night, she is homeless, a survival sex worker.

City Haven, Rollins is there because Daria said that Tania would go there. The next step is to see Beauty, a friend of Tania’s who goes on dates with her sometimes. Beauty says she taught Tania how to survive, she saw her last night, she went to the Country to get her coat.

Fin goes to the restaurant to see Country, he admits that he did see Tania, she took her coat and left a backpack. He goes on to tell Fin that these girls have no place, so they leave their stuff with him for safekeeping.

Benson finds out that Beauty is missing, she put some cash in her bra, went to score, and never came back. She left her bag with some girls, they give it to Benson. Two girls in two days, Benson says this doesn’t sound good.

Velasco and Rollins head over to the 27th precinct, they are given a folder of missing girls over the last few years that nobody is looking hard for. Rollins looks at the photos and sees some girls that look a lot like Tania and Beauty, she tells Velasco that maybe they have a serial.

The team get together to go over the photos of the girls who are missing, the girls were over 18 and nobody went back looking for the girls. Benson says they could have ended up at the morgue. At the office of the Chief Medical Examiner, Fin and Benson head over there and find out there were two Jane Doe, they were strangled and raped. The second victim had her liver and intestines removed crudely with a butcher’s knife and a meat cleaver.

Fin and Velasco, along with Rollins head over to see Country and tell him they have a warrant. They bring him down to the station and ask him questions about his whereabouts. They find a traffic cam of him going up the third avenue at 11 pm, he was with a young woman. A half-hour later, there is only him left in the vehicle. Benson asks him if they tear apart his restaurant, are they going to find Beauty or Tania’s blood there. He tells them Tania had a date, a regular, he dropped her off. He says Tania is going to show up any day now and they are all going to eat ribs together. Benson says until then, she is going to need an address.

9th Avenue, Rollins, and Velasco look around. Velasco thinks Country sent him on a goose chase. A young boy asks them if they heard about the vampire, he lives nearby, sleeps during the day, and goes out at night. Rollins and Velasco break into a building that the boy was pointing to inside there is a horrible smell. They go inside and find skeletons and both Beauty and Tania, dead and laying down on slabs.

Benson and McGrath are on the scene, she tells him that she has Country in custody. He tells her to make the case, this is evil. Velasco says that he can’t imagine what those women went through. Benson says in twenty years, she has never seen anything like this and you never get used to it, any of it.

Benson and Fin question Country again, he still maintains that he did nothing. Fin shows him photos of the skeletons, he says they were murdered, butchered, organs removed, brains pulled out of their skills, dried and preserved like beef jerky. Country begs him to put the photos away.

Country starts crying, he says he is so sorry. Velasco barges in and says they have something. The medical examiner says all twelve of the mummified bodies were strangled, all sex workers. They were able to ID two more girls, they went missing when Country was in prison, he couldn’t have done this. Whoever did this is still out there.

McGrath holds a press conference and says they are working around the clock to find the killer. Daria goes to the morgue to ID her sister, Benson is with her.

Benson goes to see Lois Hart, she is the mother of one of the victims. She says she knew it would end this way. She met a man at a town fair, she was happy for a minute and when the carnival closed up, she left with him. Her grandson is there, he is on the autism spectrum and tells Benson the exact day his mother left. He also recalls that it was with a man in a grey truck, and he gives them the license plate.

Rollins and Velasco find the truck, the owner of the truck is Trace Lambert and he is coming out of his home when they walk up. His mother is there and she says she is going with him.

At the station, Trace has a misdemeanor file and the timeline fits. Benson tells Velasco to get Trace’s mother a coffee, play the good son while they question Trace, he claims he knows none of the women whose photos they show to him. Benson then speaks to his mother, then goes back to him alone.

The guy she is looking for is methodical, intelligent, organized, he picked women that nobody would look for and found a location where nobody could find him. She says again, that his mother was right, can’t be him. Ten years and the owner of the building had no idea what was going on in there, then he just happens to be dead. Trace says the killer pretended to be a buyer, the owner never saw it coming, he was poisoned, made to look like a heart attack.

Trace says it was his plan, Benson starts laughing. Trace says he killed them, they were all his girls and she had no right to go in there and destroy ten years of his life. He says Tania screamed for her sister, Beauty couldn’t stop shaking, Dee pissed herself, Meredith she kept saying no, he kept her alive for days. He killed all of them, he tells her to tell him, mother, he did all of it.