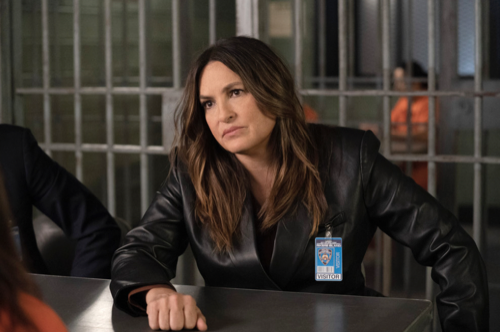 Tonight on NBC Law & Order SVU returns with an all-new Thursday, November 11, 2021 episode and we have your Law & Order SVU recap below. On tonight’s Law & Order SVU season 23 episode 8 “Nightmares In Drill City,” as per the NBC synopsis, “Carisi asks the SVU for help with a murder investigation when one of the witnesses shows signs of abuse.”

In tonight’s Law & Order SVU episode, two girls are in a car, Tori and Jasmin, with two men, one is the driver and Tori is posting photos of her and Jasmin on social media, they get an address to hook up with Chris and some friends, they stop at their place. Once they arrive the shots are fired, the men in the house are shot and the two who arrived with the girls steal their money. Jasmine and the two men from the car leave and abandon Tori in the alley.

At Beth Israel hospital, Tori, the girl left behind, is 17 years old and was shot in the leg. There is a surviving victim, Chris Miller, he says he knew Tori, not the other girl and Tori brought them to the house. Carisi updates Benson and Rollins, this should be with homicide, but Carisi says they found bruises on Tori’s body. Her blood tests show that she has two different STDS and she flinches every time a male detective comes near her. Benson and Rollins question Tori, Rollins says they know she texted Chris for a date and then showed up with a crew. She says he made her do it, but she can’t tell them., he will kill her too.

SVU looks into Tori, she is a senior at high school and on the honor roll, she lives with her mother who has been in Poland for a month and is on her way back.

Tori is out of the hospital, Carisi, Benson, and Rollins interview her. Carisi tells her that three people were killed, she will be charged with three counts of homicide even if she didn’t pull the trigger. If she helps them, they will help her. Chris told them that there was another girl, Tori gives up her name, she says she used to be her friend. She says G made her do it, he is a rapper and he and his crew have this YouTube channel, and he is a star.

SVU find some videos, online. G is waving a gun and the victim’s necklace around, Fin says they are cloud chasing and these dummies want to be famous so bad they do their job for them. They show the video to Tori, she recognizes the place in the video, she has spent a lot of time in that room. She gives them the address. SVU proceed to break in, when they apprehend G he says Tori planned the whole thing and he can prove it.

G is David Graham and has a sealed juvenile record. Benson and Fin interview him, the guns he has in his possession match those that killed Chris’ friends. He says it was Tori’s idea of the robbery.

Rollins goes to see Chris in the hospital, he says he is a movie geek, he is not part of a gang. He got the others killed, he trusted Tori.

Next, Jasmin is being interviewed, she blames Tori as well, she says she and G didn’t know Chris, Tori was the connection.

Benson and Rollins tell Tori that G and Jasmin that this was all her idea. Benson tells her she has some more explaining to do, she asks for a lawyer.

Later, Tori, her lawyer, Carisi and Rollins. She says she met him when she was 15 and let him have sex with her and then he wanted her to have sex with other men for money, that is trafficking. She tried to get away, he beat her and one time he cracked her skull. She went to the hospital, but she was scared, she said that she fell down the stairs.

She ended up stripping in a sleazy club in queens, turning tricks and giving all the money to G. And through all of this, she was going to school. She couldn’t escape, she had to do what G told her to do.

Later, Benson tells Carisi that she is cooperating witness, can’t he cut her a deal. He doesn’t know, she tells him to figure it out. In court, Carisi tries to plead Tori’s case, to no avail. G’s videos get a million views in two days, a lot of eyes are on this case.

Judge Serani orders all three remanded and when Tori’s lawyer tries to talk, he tells her to save it for the trial. Benson tells Rollins they are SVU, they are going to open their own case into G as a rapist and a trafficker.

Benson brings Lorraine Maxwell, the court chief, photos of Tori when she went to the hospital a year ago when G beat her and she got a skull fracture. Benson says that in her experience Tori was coerced and acted under duress after years of abuse. Carisi made his point.

At Rikers Island, Tori is offered a deal, 25 years, she will get 10, and Jasmine was offered the same deal, she has agreed to take it. Benson tells her three people are dead, if she didn’t text Chris they wouldn’t be. She says she didn’t know they would kill them. Carisi tells her that if she doesn’t take this deal now, it is off the table. After Carisi jumped through all the hoops, Tori doesn’t take the deal.

Back in court, Carisi is speaking, Jasmin is on the witness stand. She says Tori is trying to play this good Catholic girl, but she sent the text and she was the first on through the door. Chris is next on the witness stand, he says he was excited when he got the text from Tori because he had a crush on her. He says nothing matters because he lost his brother.

Tori is on the stand, she tells him how she met G and what he made her do. She says she was terrified that he would hurt her again, so she did whatever he wanted. She was also gang-raped many times. She claims that the robbery was G’s idea, if she refused, he would sell her to someone else who would work her over, and he had a gun in the car. She was scared and says she had to do it.

Carisi asks her if she was afraid for her life, why didn’t she ever call the police, she says she didn’t think to do it. He asks her if G bought her gifts, she says yes. She admits she did like it at first, and she tried to say no many times. He says she took a two-week vacation and returned to her double life, she never told anyone that she was being exploited until she was arrested for murder. She says she never told anyone. He asks her how will the jury know if this is the truth or just an excuse for murder.

Benson tells Rollins they should go back and speak to Jasmine, maybe she hasn’t told the whole truth.

Velasco and Finn go see Jasmin in prison, they try to break her. Finn tells her G is the bad guy here.

The charges end up being dropped against Tori and Jasmine, instead, they are charged for robbery with ten years of probation. Carisi got to his office to see the light.

Tori is with Benson, outside a church, Tori says she is going to graduate. Benson says she missed her last two sessions, which is a violation of her probation. She says she misses the excitement sometimes, she lost everything and maybe she could have stopped it. Benson tells her that it is natural for her to feel guilty, she was 14 when all of this started, she had to put on a lot of armor when this started. She begs her to be patient with herself.