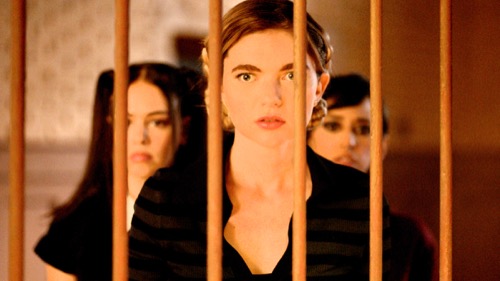 Tonight on the CW their new supernatural series Legacies air with an all-new Thursday, October 14, 2021 episode and we have your Legacies recap below. On tonight’s Legacies season, 4 episode 1 premiere called, “You Have to Pick One This Time,” as per the CW synopsis, “After learning that Malivore has taken over Landon’s body, Hope and the squad come up with a risky plan to rescue Landon; an impromptu date with Finch brings up a subject that Josie is not ready to talk about.”

In tonight’s Legacies episode, Cleo wakes in a hut with her grandmother. She doesn’t under how this is possible. Meanwhile, Hope visits the evil being Malivore that has taken over Landon’s body. He is behind bars. She plans to torture him to discover if Landon is in there at all. She tries to break the lock and cannot. She heads to see Ric. MJ, Rosie and the others are there to discuss Malivore and how to save Cleo. She wants to save Landon. They tell her Cleo is there best bet at saving both of them. They head this plan the whole time and didn’t want to tell her. After, she demands Lizzie tell her her how to open the jail cell.

Josie keeps their big plan from her girlfriend and also has to cancel their date. Lizzie doesn’t help in the matter as she is the one who talks about the cancer before Josie can get it out.

Kaleb and Ric head into the cell with Malivore. He promises to transport them to Cleo. In the middle of his magic, Hope and MJ jump on the transport. MJ tells her to stick to the plan. They need to find Cleo.

Ric and Kaleb end up at Kaleb’s high school. Th pair share a memory there. Malivore is playing with their memories. They argue about being a team. Malivore appears. He taunts them. Their memories don’t match up. Meanwhile, Josie and Lizzie argue about Lizzie not taking Josie’s relationships with Finch seriously.

MJ and Hope find Cleo first. She is with her sisters. It isn’t long before Hope blows up her whole make believe reunion with her family. She wants to know where Landon is. Malivore shows Ric and Kaleb what real happened that night, blood lust. Kaleb wants it to stop.

Lizzie questions Josie and Finch about their love, taking the questions from a magazine. She is a critic but they feel what they have is real. They start to talk about the future. Meanwhile, Malivore returns Ric and Kaleb and then heads back for the others.

Hope tries to make Cleo until that they are friends. Malivore arrives. He sends MJ and Hope on their way.

Hope and Mg are out in the woods. Malivore arrives. MG is hurt. Meanwhile, Ric is trying to stop Kaleb from attacking him. He wants to feed and he didn’t know he killed all those people back during the night they shared. Just then, Kaleb lashes out and bites Malivore who arrives. He heals. Its really Landon. Ric hugs him.

Malivore taunts Hope in the woods. He tells her how Landon is out there. She just needs to leave MG and follow the lights. Back at the school, Finch, Josie and Lizzie perform a spell.

Landon tells Ric and Kaleb that he is sick of everyone putting themselves in danger for him. If they kill him the door to Malivore closes for good. He wants them to kill him when they can.

Hope doesn’t take Malivore up on his offer. They all end up back at the school. Kaleb lies and tells Hope no sign of Landon. Later that night, MG finds Hope eating ice cream. Its been a bad day, she tells him. He thinks they did well today. They were together, Malivore didn’t break them. They can win this if they stick together.

Ric tells Kaleb he needs to focus on how far he has come. They toast to this and Kaleb having Ric’s back. Josie brings Finch soup to apologize. Josie has to try and stop pushing her away. Josie begins telling Finch about The Merge.

Hope visits Lizzie. They talk about hard times. Meanwhile, Cleo threatens Malivore. She will take the worst. Her friends will rescue her soon. Hope wakes. Her eyes glow yellow. She is feeling inspired.