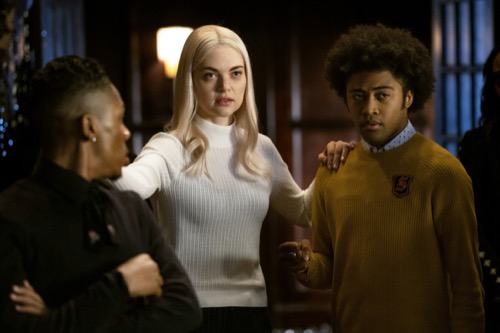 Tonight on the CW their new supernatural series Legacies air with an all-new Thursday, February 18, 2021 episode and we have your Legacies recap below.  On tonight’s Legacies season, 3 episode 5 called, “After one of their own goes missing, Alaric suggests Hope turn to the therapy box, which thrusts her into a twisted game set in a summer camp slasher flick; Lizzie’s attempt to spend some time with MG doesn’t go quite as planned.”

Everyone at the school is celebrating the end of the necromancer while Hope cries after Landon turned into black liquid. She heads to the school and into the middle of the party, bumping into Lizzie. She doesn’t know who Hope is. None of them do.

Rick is falling asleep on his desk. They have all been working to find Landon. Rick runs to Hope. He has an idea. They head to a pawn shop. They know the man sells supernatural artifacts. They force him into showing them what he has. They are looking for a vessel of some sort. Hope can tell the man knows what they are looking for. He is holding back. She starts to work her magic. He runs. Hope passes out.

Jo wakes to Lizzie making eggs. Jo heads out to orientation at Mystic Falls High. MG comes in. He and Kaleb and some others are heading out for pool time. Lizzie isn’t invited because of Alyssa.

Hope wakes. Rick is desperate. He shows her the therapy box they used a while back. Maybe her subconsciously can help them.

Hope wakes in a scary cabin. Lizzie comes in with big hair, chewing gum. She wants to know all about her night with Landon. Hope doesn’t remember anything. As Lizzie rambles on, she is stabbed by a monster with a pitchfork. Hope runs for it.

Lizzie sits and projects with MG. He thinks they are looking for Landon while Lizzie wants to find a way to keep Jo at their school. Meanwhile, Jo almost changes her mind about attending until she sees Ethan.

In Hope’s world, Ethan helps her off the ground. She tells him about Lizzie before she is then attacked by the Mystic Falls maintenance man. Meanwhile, Rick tracks down the pawnshop owner and gets the vessel they needed.

By the lake, Hope runs into Jo who is also rocking big hair and a pink head bow. She tells Hope she saw Landon. Just then the man grabs Jo from the water. After killing Jo, he jumps up from the water for Hope. She runs.

Still in the prison world, Lizzie tries to work through ways to keep Jo at the school. MG just wants to find Landon.

Hope makes her way through the school’s locked gates. She sees Jed who is suddenly killed. Sh hears Landon and runs to his voice, walking past several people who have all been killed. She hears Rick, speaking. He is in bed, dying. The monster comes for her. She fights him. He has killed everyone she loves. She peels off his mask. It is Landon. He tells her to come with him.

Lizzie and MG meet back up. Neither one of them has found Landon. Lizzie now realizes she needs to be honest with Jo and she also needs to let her do what she wants. Lizzie tries to tell MG about her feelings. But realizes it is too late.

Hope and Landon sit and talk about what just happened and the therapy box. Meanwhile, Kaleb sees Jed naked as he comes out of the house where they plan to swim. He tells MG over the phone to hang back when he hears Alyssa’s voice yell for Jed.

Joe tells Finch, her tour guide, that she loves the place and also infers she is interested in her. Meanwhile, Landon tells Hope she needs to go back to her real world. Hope wakes in Rick’s office. He shows her the artifact. He cannot open it.

Kaleb tells Mg about Alyssa. He feels so stupid. Kaleb tells him he should have been around more, not chasing after Landon who is not coming back. Jo and Lizzie finally make up. Rick finds Hope by the water. She is finally accepting he is gone. Rick offers his help, they can keep trying. She realizes others are getting hurt. She throws the artifact into the lake. Rick comforts her. Meanwhile, Landon is walking alone in the dark. He sees light from a door and enters it.