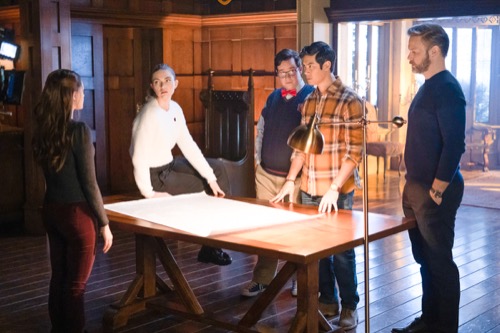 Tonight on the CW their new supernatural series Legacies air with an all-new Thursday, March 25, 2021 episode and we have your Legacies recap below. On tonight’s Legacies season, 3 episode 8 called, “Lizzie suggests holding a fundraiser for the school; Cleo helps Hope cope with her emotions; MG seeks help from Alyssa; when (Quincy Fouse) finds himself on the outs with the Super Squad after a controversial decision he made comes to light.

In tonight’s Legacies episode, Hope wakes from a dream. His powers send papers everywhere. She wakes Cleo. She swears Landon was trying to send her a message that he is alive. Later, she visits Rick to tell him about her dream. He tells her not to rush into action just yet. Downstairs, no one will sit with MG after what he did to Hope. Even Kaleb shoots down his help on guarding the school.

Lizzie helps Hope with the Landon situated while Kaleb vents to Cleo about MG backstabbing all of them. Lizzie projects them to the prison world. Hope finds a letter. It’s from Landon.

Hope tells Rick and the others about the letter. She wants to go to the prison world now. Rick thinks this is all very dangerous. Rick says that the mission is for volunteers only. MG tries to explain why this is crazy. Malivore will kill them or get into this world. They need to be smart. Everyone still agrees to help Hope.

Kaleb and Cleo have their own con about how to save Landon and how to deal with MG. After he tells her she is a quick study based on some of her ideas they head back to the school. They meet the others. After talking about their mission it becomes more clear it is too dangerous. Hope gets upset and tracks down Jo at the high school, ready to take her up on her offer. They head out to the graveyard where Hope admits Lizzie turned down helping her.

Kaleb heads to find Cleo. She has summoned a monster to help Hope. Now she needs help. Meanwhile, Jo is having second thoughts. But she decides in the end to help.

Kaleb and Cleo call on Rick for help. He takes it well. They can use the monster to find Landon. MG tells Lizzie he is happy she has his back when it comes to Hope and using the ascendant. He knows it is too dangerous. He confesses to her that she is his person. She tells him the same while apologizing. She needs to save Jo and to do that she needs to use MG. She takes the ascendent and tracks down Jo and Hope, intervening.

Rick sings to the monster. Kaleb and Cleo join in. Since the monster won’t take the money they hope he will take the song. After they get him dancing, they give him something of Landon’s.

Lizzie and Hope try a spell with the ascendant. Something is wrong. It’s toxic from the prison world. Lizzie screams. Jo tells her to let go. Something breaks them apart. It’s Landon.

Kaleb and Cleo eat breaking together. He plans to patch things up with MG. Meanwhile, Lizzie is making things up to MG. She tells him how Landon is back. He tells her how no-one took his advice and they all bailed on him. If that is how things are going to be then he needs to leave. This isn’t his home anymore.

Jo tells Rick she needs to distance herself from the school and wants to stay with a friend in town. He is sad but agrees she can go. Landon tells Hope what he remembers. On their last night, it was the two of them before darkness came. As they talk, a monster watches them from the woods.