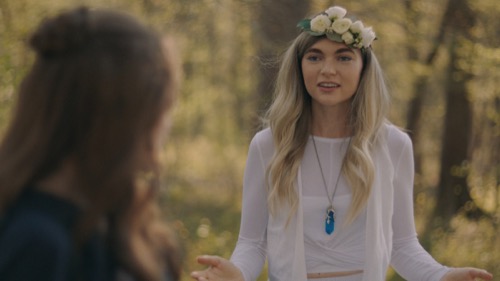 Tonight on the CW their new supernatural series Legacies air with an all-new Thursday, June 10, 2021 episode and we have your Legacies recap below. On tonight’s Legacies season, 3 episode 14 called, “This Feels a Little Cult-y,” as per the CW synopsis, “In an attempt to control some of Hope’s negative emotions, Josie suggests they join Lizzie at a wellness retreat for witches; Alaric and Dorian team up after learning MG may be in trouble.”

In tonight’s Legacies episode, Hope shows up late to theater class. Angry over Romeo and Juliet, her emotions get the best of her scaring classmates. Meanwhile, Rick shows up at Mystic Falls High School. MG has been MIA and a hiker’s body has also been found.

Jo finds Hope letting off steam on a punching bag. She suggests they get away and find Lizzie. She has been on a retreat and not communicating. At the school, Finch challenges the Alpha after he tells her the newby picks up after the pack.

Jo and Hope find Lizzie. She is very zen and dressed in white. The witches’ retreat has really changed her. She tells them all about Andi, her mentor who has changed her life. Hope thinks this sounds like a cult. The witches hold a meeting. Hope thinks this is all a joke. Andi calls her up. She laughs at her, calling her a fraud. Then Andi makes Hope feel good. Hope is suddenly very happy and likes Andi. Lizzie gets very jealous. She heads to see Andi later who really doesn’t want to help her anymore.

Rick and Dorian search the woods for MG. When they finally find him he is covered in blood and not himself. Dorian thinks MG is in ripper mode. Rick doesn’t believe that. He is taking him home. Dorian is angry and stays behind the bury a body. Meanwhile, Lizzie is back to herself while Finch shows up to compete against the Alpha of the pack. Their game of choice is Pool.

Lizzie spies on Andi and notices she does something strange with the gloves she always wears. When Andi goes to take a shower, Lizzie looks through her things. She finds a potion of sorts. Dorian buries the body of the hiker, speaking to the dead man, sorry his family will never know when a monster comes out of nowhere.

Andi kicks off the next meeting with the sounds of a bell. Suddenly, Jo is also been converted alongside Hope. When Lizzie attempts to leave to get help, Hope takes her out.

Lizzie comes to in a chair. Andi explains that she works for the Triad. She was imprisoned. Now she has her potion and other witches worship her. She brings Jo in. They will need to sacrifice a human later. Lizzie works to get Jo back to normal. It works. They need to save Hope now.

Finch is beating the Alpha and he is worried his time leading the pack is up. Meanwhile, Rick finds Dorian in a cave after following a trail of blood. He tells Rick it is a Wendigo. Just then, the monster arrives.

Jo leads Lizzie to the witches’ ceremony as if she is still brainwashed and serving her up as a sacrifice. One of the other witches knocks Lizzie out, leaving Jo on her own. She talks to Hope until she snaps out of it. Hope takes them all to the ground. They want to know from Andi what this ritual is all about but she leaves them with no answers sacrificing herself. The three of them have yet to learn the constitution she warned them of.

MG saves Rick and Dorian from the monster. It seems he has been living his life in the woods acting as a superhero of sorts and knows how to take out a wendigo.

Finch throws the game in the end when she notices how much Jed likes being the alpha. The party after, making amends with one another. At the hospital, Rick and MG learn Dorian will be all right. Rick talks MG into coming back to school. Meanwhile, Lizzie, Jo, and Hope hallucinate that they are pandas. They giggle and laugh until a monster climbs out of the hole Andi jumped into.