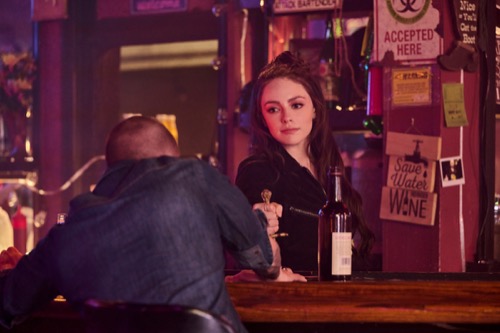 Tonight on the CW their new supernatural series Legacies air with an all-new Thursday, November 11, 2021 episode and we have your Legacies recap below. On tonight’s Legacies season, 4 episode 5 called, “I Thought You’d Be Happier to See Me,” as per the CW synopsis, “Hope is tracked down by the one person who could help her — Rebekah Mikaelson; Josie and Lizzie hold out hope in a seemingly dire situation; Kaleb wants to set things right and turns to Cleo for guidance.”

In tonight’s Legacies episode, Lizzie gets a strange knock on her door about her dad. MG is talking to Ethan when Finch calls him. Lizzie needs him. He rushes there. Kaleb talks to Cleo. They both have been thinking a lot about Landon and everything going on.

Lizzie is having a breakdown about her dad being in surgery. Josie tries to calm her. MG shows up. She hopes he can fix Ric. Meanwhile, Hope is at the local bar when her aunt shows just as she is ready to bite a civilian.

Rebekah isn’t there to spoil her fun. They both bite the civilian. Finch helps Ethan just as he almost hurts himself with weights. They talk about Lizzie and Josie. Then doesn’t know what to do about Lizzie. He likes her and wants to show he cares.

Kaleb shows up at the hospital. Everyone looks depressed. They have to wait for Ric to wake. They cannot help him. Cleo has an idea. They can get into his mind. Lizzie doesn’t like this idea. Plus Kaleb stabbed Ric in the back. Cleo thinks they need to find the monster out there.

Hope wants to have more fun. Rebekah wants to talk. Hope remembers attacking Ric. She didn’t want him to stop her from being a tribrid.

Lizzie and Josie go into Ric’s last memory. They see Hope. Lizzie wants her dead. They dig deeper and watch memories of Ric and Hope talking when she is young. She is acting out at school after fighting with Lizzie and Josie. Lizzie hates the memory. He is so nice to Hope. They look further to find their dad.

Rebekah tries to get through to Hope about being a vampire and how being human isn’t terrible. Rebekah stabs Hope just like Nik used to do to her. Meanwhile, Lizzie and Josie watch Ric afraid to take in Hope at first. Ric lay in his hospital bed. He struggles as his brain bleeds.

MG brings Lizzie and Josie to their birthplace, a hospital. Ric is there. MG was right. They needed to get ahead of him. Ric explains all about Hope. He hoped they would all be friends. He tried to make life safer. Lizzie demands he come back. He doesn’t know if he can.

On their way to look for the monster, Cleo kisses Kaleb. Ethan visits the hospital and talks to MG. They talk about Lizzie. MG admits he cares for her. Ethan understands. No weirdness. Ethan just wants to be friends. Josie is mad she didn’t go with Lizzie to Ric’s memories. Lizzie promises to get their dad back. Everyone holds a vigil.

Rebekah comes on the side of the road after Hope had taken her out. Hope isn’t into family and feelings. She tells her to stay away. Hope takes off in the car to go meet the Triad.