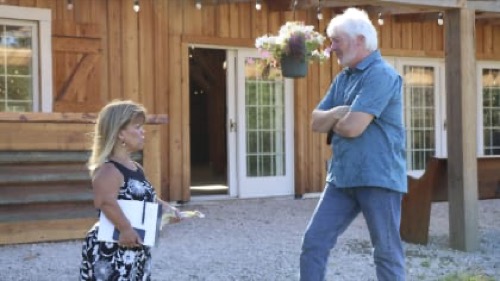 In tonight’s Little People, Big World episode, Amy no longer owns a stake in the farm. She and Matt signed a buyout offer. Matt is now the full owner of Roloff Farm and so the question is what’s next for Amy. Amy is planning her wedding. She and her fiancé Chris have different ideas about what they want for a wedding. She wants something more traditional while he wants something more informal.

They were offered Roloff Farms by Matt. The couple chose to turn that down and so they were looking elsewhere for a venue. They still wanted a farm because they liked the idea of a big barn for their venue. They went looking at several farms and they found one they really liked. It was big enough for a wedding. There was also room for a dance floor and for long tables. And so the couple had an abundance of choices as they went looking for the perfect place for their wedding.

Matt was also planning something. He’s always wanted a log cabin and he can finally have one now that he doesn’t have to clear it past Amy. Matt was building his log cabin. It was going to be a place to watch the sunset. He was building it himself and he couldn’t wait to enjoy the space with his grandkids or with his girlfriend Caryn.

Caryn never really had a say in the running of the farm as long as it was Matt and Amy who owned it, but now that’s different. She can now plan something for the farm. Caryn wanted to start a new chicken coop. Matt’s chicken coop was high in the air and it wasn’t accessible for someone like Jackson. Jackson needed something low on the ground. Caryn was going to build something and she couldn’t wait to see him enjoy it.

Caryn was close to Zach’s family. Zach made it clear that he wanted to run the farm one day and he finds that will be easier now that he just has to negotiate with his father. Zach would like some ownership of the farm. He already lives there. He raises his children there and he and Tori want to move into one of the big houses. Only they want full ownership of the house.

They didn’t want to feel like Matt owned the house or that they had to clear everything they did at the house with Matt and so they decided to bring that up when they next saw him. Zach and his wife and kids met up with Matt and Caryn at the new bird coop. Jackson had loved the bird coop. They loved helping and he got to do something with his hands. And that’s something little kids love.

The two couples also got to talking. The pandemic was still happening and that was cutting into profits. Matt didn’t think their pumpkin season would be as big as before. He thought they would have to do private tours and so he wanted to buy another mule and Zach told him that wasn’t a great idea.

Zach was like his mother in a lot of ways. He thought about the budget. If they were going to have their worst pumpkin season to date, they couldn’t afford to buy another. Not when they already have six mules and six mules will do the job. Zach said what Amy would have said if she had been there. Zach was the Amy in the relationship and Tori was like Matt. They jumped before thinking sometimes.

The real Amy meanwhile was having an issue. She bought a huge house and there’s no room in it for her future husband. There’s no room for him because Amy is a packrat. She has so much junk that she lugs around and she was supposed to have gotten rid of it when she left the farm, but instead, she brought it with her to the new house. Her garage was packed with boxes. Her home was full of her stuff and she was just disorganized.

Amy has to purge some of the items. She knows it and Chris knows it. He doesn’t say anything because he thinks eventually Amy will come around. She has to make room for him if they’re getting married and he couldn’t really live in his own house while they’re married. It would be like they were living separate lives.

Amy’s friends talked to her about it. They asked her if she was feeling any pressure from Chris to clear up space for him and she said Chris hadn’t mentioned anything. Her friends said that might be because Chris is waiting for Amy to bring it up. They were planning a wedding only they weren’t planning their lives together and that’s what Amy was denying him by not making space for him.

Amy probably doesn’t want a repeat of being with a Roloff. Being with a Roloff was very Roloff intensive. Both Caryn and Tori spoke about this recently. They also spoke about it again when they were decorating the chicken coop and they said the height difference never mattered to either of them. They’ve also both been accused of being golddiggers. They were not. They loved their men for being who they are and those men just so happened to have dwarfism.

Tori’s children also have the condition. Jackson didn’t have as many things wrong with him as Lilah. Lilah’s eyes are shaky. She’s slowly walking or stand up. She was nine months old and she always had problems with her health while her brother’s problems were just showing up. Jackson’s legs were beginning to bow. He might have to have surgery on them and his father has been through it. Zach said it was painful.

The physical therapy afterward was also painful and so this is one of the last things that either he or his wife would have wished for one of their kids. But it’s happening. Another happening is Chris’s move and so Amy finally confronted it. She said she will clear out some things when Chris is ready to move in. And that time is now.