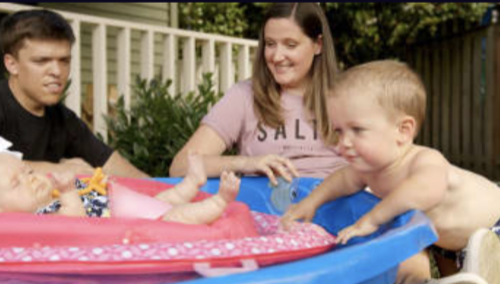 In tonight’s Little People, Big World episode, Little Jackson’s legs are bowing. He’s walking on the outside of his feet and so his parents were taking him to see a doctor. Only one of them could go with him because of the new covid rules. Tori made sure it was her and Zach wishes he could go as well. He has questions.

He wants to hear everything from the doctor because he says his wife tries to see the bright side of things and he feels being there would mean he gets to hear it straight from the doctor. They also want to ask about a rash. Jackson suffered a terrible rash all over his body. His parents tried to put a cream on it to help the itching and it wasn’t working for Jackson because he was still miserable. Jackson complained bout that rash than he did about his legs.

Jackson’s legs were not hurting him. But it is going to hurt when they broke those legs to reset them and that’s what in store for Jackson. Jackson’s situation was a tough one. Zach and Tori were learning about it as new parents while Zach’s own father has had experience with the procedure. Matt suffered several surgeries as a child.

He’s been through it all and he hated seeing his son Zach suffer as well. Zach’s legs were bowing. He had to have surgery to correct it and that’s why he wanted to be in the room when Jackson had his appointment, but it was Tori and she knows to take things seriously when they concern her children. Jackson’s health and his legs concerned his parents. It didn’t concern Jackson.

Jackson was a little boy. He was still a baby in a sense and he was happy. He was helping Matt fill up capsules. The capsules were for the grandkids. Matt wanted to fill them up and hide them in the sandbox. He wanted them to go treasure-seeking after he dies. They would find these capsules filled with happy memories and they would all have notes from Matt which offers words of wisdom to his grandbabies. It was a sweet project.

Matt was very proud of it and he was glad he got to share that with Jackson and Zach before Jackson’s appointment with the doctor. Zach’s parents had plenty of advice for this doctor’s visit. His mother Amy was especially shocked to find out Zach wouldn’t be going to the appointment.

Then Zach told her about the new covid rules. COVID-19 has ruined a lot of things and one of the things it’s changed for the worse is hospital policies. Two parents should be allowed to be there during some as serious as a discussion about surgery. Zach had had two surgeries performed on his legs once they started bowing.

They had been painful nightmares and he didn’t want his son to experience that but he couldn’t physically stop Jackson’s leg from bowing. They were bowing. They were seeing a doctor about it and the doctor decides which procedure Jackson will eventually have to have. Zach and Tori were worrying about this as Amy was dealing with an old problem of hers. She was dealing packrat ways.

Amy is a packrat. She bought a new house and then filled it with her junk and now there’s a new room for her fiancé. Poor Chris had to say something because Amy didn’t want to change. Amy took over the whole house and there wasn’t even space in the garage for any of Chris’s things. Chris said he needed to be able to move in before he could settle on a wedding date. The wedding date or a location. They have a general idea of what year they wanted it to be but not much else and the house is an issue. Chris would like to feel welcomed into his future home. He would like to feel welcomed by his future wife. Amy didn’t want to be fully closed in by junk. She was like that in the last house and she was doing her best to get rid of it when she accidentally created the same atmosphere at the new house.

Jackson saw the doctor. The doctor doesn’t want to do surgery now on a three-year-old and it helps that Jackson’s legs aren’t paining him. If he does have the surgery now, they’ll have to go back in to fix it when he’s nine because he’ll still be growing and so it’s best just to wait. Jackson wouldn’t have to have a painful surgery. He wouldn’t be laid up in bed or having to learn to walk again. He could just be a kid for now.

Which is what all the adults want for him. Jackson later helped his grandfather Matt with the capsules and he even put in some of his things. He wrote a list. He mentioned his favorite color is red and that he wants to be a pilot because he wants to fly planes. He also wants to wear a pilot hat when he gets married. Jackson’s list was better than Lilah’s because her parents basically wrote down the sounds she made that day.

Lilah hasn’t said her first word yet. Both of her parents have been guiding her into saying a word and naturally it was either Mama or Dada. Jackson said Dada first. He said it at ten months and he was a year and a half before he started Mama. Now, he says it all the time. Jackson is constantly saying Mama because he always wanted to show her something and so mom is his favorite. Lilah also favors her mom because she mostly likes just Tori holding her but she will let her dad hold her if he’s the only option left. He watched her during Jackson’s appointment. She was calm then and so daddies are great too.

Amy also reeled in her packrat ways. She and Chris brought movable shelves and Amy was able to use them to create more space in the garage for Chris. The two of them also tackled the office next. Amy made space for him there as well and so now Chris can move in.