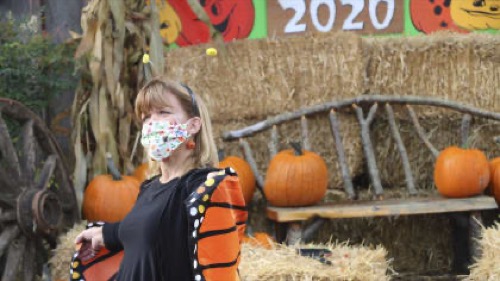 Matt hopes Zach can take on more duties, but they butt heads while trying to work together. Meanwhile, Amy struggles to deal with her new role as employee rather than owner.”

In tonight’s Little People, Big World episode the pandemic changed a lot of things. Matt hadn’t been sure whether or not he wanted to do a pumpkin season with all the restrictions in place and so he only agreed to do it after much thought. They were going to have pumpkin season albeit on a smaller scale. They still wanted to charge people ten dollars a person for entering. However, there won’t be the same kind of entertainment and people will more walk around with this one.

Zach had a few ideas. He thought people could wear wristbands and so others pointed out the pitfalls to that. People with wristbands couldn’t be told to leave if they didn’t really want to. It was hard to monitor who had which wristband and it will ultimately not work out because of the sort of people who do show up. And so it had to be a “no” from Matt.

Matt invited Amy to the new pumpkin season. She didn’t participate last year because her mother had passed and she hadn’t wanted to celebrate but she’s been known to be the face of the pumpkin season and she also enjoys herself. She loves taking pictures. She loves meeting new people and so she was glad to come back this year. It was a little odd being back at the farm. Amy sold her shares in the farm to Matt and so she found herself reminiscing while she was there.

She was touring the place with Matt. She found it odd that she suddenly couldn’t say anything about what’s being done and it was also brought up that she could use the farm for her wedding. Amy did think about it. She wasn’t sure she wanted to do it but she still mentioned it to her fiancé.

They do need a place for the wedding. Amy has made space for her fiancé Chris in her new house and so he’s been moving his stuff in and now they just need to have the wedding. They didn’t have a set date. The pandemic was playing havoc with their plans and that’s why they were considering all of their options. They were talking about while Matt was showing Zach his duties on the farm during the pumpkin season.

Zach had made it known that he wants to run the farm one day and so Matt showed Zach everything he does so that Zach could do some of it. Zach was used to doing just his part. He has gotten used to doing what’s comfortable for him and that’s why Matt wants to push him out of his comfort zone.

Matt brought life-size dinosaur figurines. He and Zach set them up close to where the kids will be during the pumpkin season and, while Zach didn’t see the appeal of spending money to make money, he did give his input about the best place to put it. But Matt also needs an Amy. Amy was the person who talked him out of expensive decisions and so Zach could be that person. Someone who tells Matt not to spend so much.

The pumpkin season was smaller this year. They also had online registrations and they were going to move people through a coordinated path. This path had sanitation stations the whole way. The walking path also had many attractions. It was a fun game and there were goats.

Zach’s son helped him with the goats. He was just supposed to lead one to the new pen when he let go and so Zach had to go running after goats. The goats went into the new pen that was nicknamed the “Goatel”. Caryn was also helping around the farm. Caryn was on the ground doing everything she could and things were less awkward with Amy this year. The two women usually had tense pumpkin seasons.

Only they didn’t have that now. Amy was just another employee like everyone else and they both wanted to make the season special for everyone. Amy was in her usual costume. She was dressed up as a butterfly and she was taking pictures with everyone. She even did a cute photo with a toddler who was also a little person. And so Amy bent down to be closer to her and the little girl copied her by bending down as well.

Matt also caught up with his friend Bob. Bob was a friend of Matt’s from childhood and they reconnected a few years ago and ever since then, Bob comes out for pumpkin season with his wife Jody. Matt caught up with them Caryn. They told her about Matt when he was young. She doesn’t think she would have liked him if they had met at the time and so it’s a good thing when they met as adults. They were both pretty settled by then.

Caryn and Matt have been together for a while. They weren’t engaged or anything yet Caryn has made it known that she wouldn’t mind it if it does happen. The producers asked Matt about it. He said that was a long way away and so he was not as eager to get married again. He was married to Amy for a long time. He just got back full ownership of the farm and he is not eager to let it go.

Amy’s wedding was also the bigger issue. Amy and her fiancé Chris have whittled down their venues to two locations. One they liked and the Roloff farm. Matt was building a new house not that farm from the barn and there was no telling when he’d get the frame up or how hidden it would be against the trees when or if Amy and Chris choose to have a wedding at the barn there. The two of them walked around to get a sense of the farm. And as they were doing that, Matt and Zach were butting heads about the private tours.

Zach wanted to go one way and Matt called it selfish and thought he should go another.