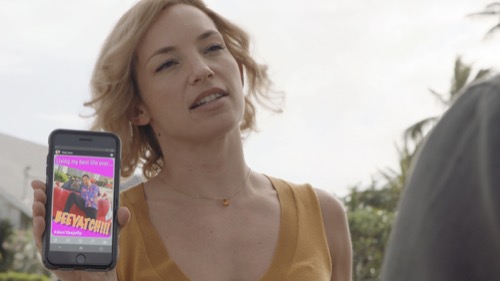 Tonight on CBS their reboot of the classic series Magnum P.I. airs with an all-new Friday, May 7, 2021, episode and we have your Magnum P.I. recap below. On tonight’s Magnum P.I. season 3 episode 16 Finale “Bloodline,” as per the CBS synopsis, “Magnum and Higgins work a stalking case involving a man with a past in espionage.

Also, Ethan asks Higgins to join him on an extended trip for Doctors Without Borders just as Magnum starts to open up to other possibilities.”

In tonight’s Magnum P.I. season 3 finale episode the episode begins with Jin, who is driving Higgin’s car and shows off at a light and first with a woman who is on Vespa with her boyfriend. Magnum mentions that Higgins is single. Jin says he would be perfect for Higgins, he loves to drive Ferraris and she loves to own them. TC tells Magnum that he thinks the unaversive is telling him that he should make a go at it with Higgins. Magnum swears they are just partners.

Magnum meets up with Higgins, he tells her if she wants to sit this one out, he can handle it, but she says no. Kumu referred them to this case, Higgins says yes she knows, a friend of hers, Chloe Dawson. Higgins tells him that he knows Jin was driving the Ferrari, he posts several photos to social media.

Magnum and Higgins meet with Chloe and Kumu, she says she found something in her wheel well yesterday, a tracker. The last few weeks she has felt like someone was falling her and she is worried now she has a stalker. She thinks someone has broken into her place, but nothing was stolen. She called the police, but they think she is paranoid because he mother died last month, they are not taking the case seriously. Chloe says whoever is doing this, has scared her. Magnum promises that he is going to get answers for her.

Higgins feels awful for Chloe, she gets a call, Gordon got in contact with the company that makes the device, they were able to trace the serial number and have the address of the person who bought it. They head down to the dock, a break-open Brayden Marshall’s door to his boat, on his camera he has photos of Chloe. Magnum calls Chloe and asks her if she recognizes the name Brayden Marshall, or his face, and she doesn’t. Higgins checks Brayden’s computer, he has made payments for a rental car, she finds an address of where it is. Magnum tells her that he will handle it, she can go take care of matters with Ethan.

Higgins goes to Ethan’s house to pick up some of her things, he is leaving in two days. Ethan tells her that he was wrong, he ruined the best thing that ever happened to him, he was impulsive and wrong. Higgins kisses him. She tells him that they have learned how to navigate a long-distance relationship. Ethan asks her if she wants to go with him. He says it is not glamorous but they will be together. He asks her to think about it.

Magnum pulls up the address where the rental car is located, he goes into the house, the rental car is there but Brayden is not. Magnum looks in the trunk and he finds Brayden, he is dead. Magnum calls Higgins and tells him, he says there is no activity on his phone, just a photo of a man that looks age progressed.

Higgins says she has a hit, the photo was pulled from an FBI watch list, the man is Henry Sellers, been on the run for twenty-two years, he is wanted for murder. She forwards the photo to Chloe, she doesn’t recognize him. Magnum tells Higgins he has to go, Henry has arrived with two large containers of Potassium Hydroxide.

Magnum asks him how he is connected to Chloe, he says he is her father, her mother told her he was dead to protect her. They sit down, Henry says in ’96 he was a spy and was sent to Hawaii. He fell in love with Chloe’s mother, he made plans to defect. His handler tried to kill him, he killed him first. Magnum asks him how he is on the FBI’s radar. He says the only way to make sure Chloe and her mother were safe is if he went into hiding. He is the one who was following Chloe for a few weeks, in doing that, he found Brayden was following her as well and he is SVR.

Brayden was following her to get to him. He brought him to the house for interrogation and claims Brayden took his own life before he had a chance with some kind of poisoning. Magnum is trying to decide if he believes him. Magnum then calls Higgins and tells her that his gut tells him that Henry is telling the truth. All of a sudden, an SUV drives up, Higgins and Henry have trouble. Henry tells Magnum to head to the woods and see if they lose them. Higgins and Henry are running through the woods, they hold off the guys with a flow of bullets.

Magnum picks up his phone and calls TC, tells him that he needs help, gets there as soon as he can. TC comes to the rescue, but Henry is hit. TC calls medics, says his ETA is ten minutes, Magnum puts a bandage on Henry and tells him to apply pressure. Magnum calls Higgins, he is worried about Chloe. Higgins calls Chloe and tells her she may be in danger, lock the doors, HPD is on the way. The police show up, but first, two masked men take Chloe and her phone falls on the living room floor.

Higgins shows up at the hospital, Henry is still in surgery. Gordon is there, he thinks the guys will probably call Magnum and Higgins, knowing they are involved in this. Higgins wants to take a look at Chloe’s laptop, see if she can find anything. Magnum gets a call, it is Chloe, a man takes the phone and tells Magnum that is proof of life, he wants to trade Chloe for her father.

In the hospital, Magnum tells Henry to want the men to want. They hear men outside the room, it is the FBI, they want to take Henry into custody. Gordon tells them no, that is not happening, his daughter is being held, hostage. The FBI says they are taking Henry to DC, they will have to get her daughter another way.

Gordon calls his boss, there is nothing he can do, the FBI is in charge now. Gordon gets a text, they found a guy who is in town, Mikhail Kozlov, he is SVR. Ethan arrives, Higgins tells him that a young woman that hired them this morning was abducted, about his offer, she would love to go with him, but she just can’t pick up and leave, she has responsibilities here, people who depend on her. Ethan says Magnum, she says not just him, but she can’t bail. Ethan tells her that they will make it work. He tells her to call him later.

Gordon tells Magnum and Higgins that TSA has no record of Kozlov entering the US. Magnum does a little digging, and he figured out that the man Henry killed twenty-two years ago, is Kozlov’s father. They go and tell Henry who says they need to get him out of there. Henry tells them that if he is SVR, they won’t find him before the deadline.

Higgins has an idea, she uses her MI6 contact. She and Magnum are alone, she tells him that Ethan wanted her to go to Kenya with him, she said no. A car pulls up with diplomatic plates, the man gets out of his car, his name is Andre. He agrees to do them a favor. Kozlov is using the name Victor Zedman while he is on the island, he flew in on a private jet. Gordon is able to look at video surveillance of when Kozlov arrived in Hawaii, there is an SUV and Gordon traces the plates. Meanwhile, Henry has escaped from the hospital.

In a warehouse, Kozlov is there with his Russian friends and Chloe. Henry is there, he gives up his fun to see Chloe is alive and well. Kozlov tells Henry that he has a lot in common with his daughter, they both grew up without a father. Kozlov kicks Chloe to the ground and threatens to shoot her. Then, bullets are going off everywhere, Higgins and Magnum are there. Gordon arrives to help out, Kozlov has a gun, he is laying on the floor and points it at Chloe, Henry is there and shoots Kozlov before he has the chance. In the end, Chloe and Henry are ok.

Magnum knows that Henry has information that the Feds want, hopefully, he can make a deal and will only get a few years. Higgins gets a text from Ethan, Magnum tells her that she should go, he doesn’t want her to resent him because she stayed back because of their partnership. He tells her to say that she will go if that is what she really wants. Three days later, Higgins is saying goodbye to the dogs, she gives Kumu the keys to her place and tells her to run Robin’s Nest while she is gone.

Magnum is at the beach with the guys, Jin is there and he says when Higgins splits town maybe he needs a new partner. Higgins and Ethan stop by to say goodbye, everyone hugs all around. Higgins asks Magnum if she can have a word, she was busy the last few days and she feels like she didn’t have a chance to see him.

She says last year when she got shot, he said he didn’t know what he was going to do without her, but she doesn’t know what she is going to do without him. She says he grew on her, they are oil and water. He is her best friend, he says ditto, jolly good. They hug. Rick tells TC maybe they are wrong, maybe he doesn’t love her after all. Higgins and Ethan leave. Magnum sits back down with the guys and Kumu.