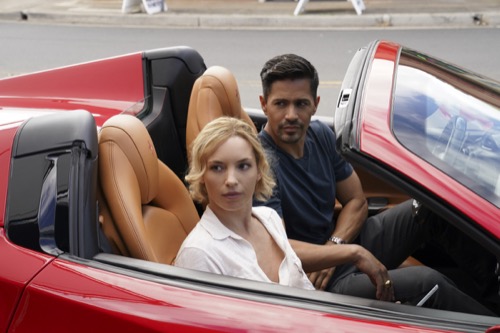 Tonight on CBS their reboot of the classic series Magnum P.I. airs with an all-new Friday, February 12, 2021, episode and we have your Magnum P.I. recap below.  On tonight’s Magnum P.I. season 3 episode 8 “Someone To Watch Over Me,” as per the CBS synopsis, “When a young man in need of immediate emergency surgery goes missing with a bullet lodged in his chest, Ethan (Jay Ali) asks Magnum and Higgins to find him before it’s too late. Also, TC talks to a military recruit who may be enlisting for the wrong reasons.”

Magnum is playing poker with Rick, TC, Higgins, Gordon, Kumu, and her doctor date, Ethan. Afterward, Ethan and Higgins make out, his phone rings and she tells him not to dare answer it, but he does and says he will be right there.

The next day, Higgins goes to take up Magnum, he won’t move so she throws a glass of water on his head. She tells him that Ethan needs them at the hospital, he says it is urgent. She tells him to get dressed. TC is speaking to up and coming Marines, he says he wanted to fly a chopper, but he got so much more when he joined up and it made him the man he is today. A young man, Joey, thanks TC for the talk and says it brings home wanting to be a Marine. He is also from North Carolina, he asks TC that he would love to buy him a coffee. TC says yes, but he is buying.

Higgins and Magnum are at the hospital, Ethan says he was called to the hospital to do an emergency consult on a 22-year-old named Paul Wilson, he had shortness of breath that was getting worse. An x-ray showed that he had some weird metallic object in his lung and he asked him if he swallowed anything, he said no. He told him he had to do more imaging, that is when he disappeared. Magnum says this really isn’t a police emergency. Higgins looks at the x-ray and says it may be a bullet, Higgins says they will help. Ethan says there is a clock on this, if something is not done soon, Paul will be dead in a few hours.

Higgins and Magnum are on the road, he says they should just go to his house, if he didn’t feel well that is where he would go. Meanwhile, TC is having coffee with Joey who tells him that he doesn’t have to sell him, he wants this really bad and he would be following in his family’s footsteps. TC asks what the draw is for him, he says he loves his country. TC asks him if he is joining up for him, or his family.

Rick is speaking to a woman at the bar whose food was not cooked well, TC walks up and he knows her, her name is Susie and she just moved back there. Susie leaves and TC teases Rick about her. Then TC tells Rick about Joey and says he is worried about his motivation to sign up, he is doing it to please his family, and he is not sure he should get involved.

Higgins and Magnum make it to Paul’s house, he is not there but his hospital bracelet is. They head to a bakery where he called an hour ago, the clerk says nobody called him. Higgins calls the number and she hears it ringing, she and Magnum go back there and find what they think is an underground medical clinic. The doctor says he is legit, but he can’t get licensed in the US and these people are sick. He met with Paul, he said he told them he would die if he doesn’t get help. Paul knew about the place because he was shot twelve years ago and went there for help at that time.

Higgins calls Gordon, she tells him about Paul Wilson, who they can’t find. He was shot twelve years ago the bullet has now punctured his lung, and he ran. Meanwhile, TC goes to speak to Joey and gives him some wise advice, and tells him his life and the lives of the other Marines are at risk if he is not feeling it.

Higgins calls Ethan and updates him about Paul, Higgins is there and gets a call from Gordon. Paul is clean, no record of the shooting, his brother Tanner is not clean, he has done some jail time. The father was a prime suspect in the shopkeeper’s death. They think Tanner shot Paul and he couldn’t go to the hospital because ballistics would know it was connected to the murder of the shopkeeper. So, Paul is risking his life to protect his father.

Higgins and Magnum are on their way to speak to Wilson so they can find Paul. Gordon calls, he tells them to turn around, Wilson left work already and is heading home. Also, Wilson is likely to be less scared of them than HPD. They knock on the door and Mr. Wilson answers, he says he is not there. Magnum says it is about the bullet that has been in him for twelve years, Higgins says they also know about the shop keeper that he killed. Wilson says he was waiting for this to catch up to him. He says he never did anything like that before, he had to feed his kids. He put the gun in his nightstand, Tanner found it and accidentally shot Paul. Higgins tells the father that Paul’s condition is worsening, they need to find him. Higgins tracks his phone, they are at Ethan’s house. Higgins, Magnum, and Mr. Wilson are on their way there.

They arrive, Higgins sees Tanner with a gun on Ethan. Wilson offers to go in, he says his son won’t do anything if he sees him. Paul is there and he is not well. Higgins tells the boys that Paul needs to go to the hospital to have surgery or he is going to die. Higgins says his father could leave the island, their job was to save Paul. Mr. Wilson hugs his son and leaves. Ethan picks up his phone, he calls for an ambulance right away. Magnum looks over at Higgins, she says she didn’t have a choice, they have to save Paul and HPD can catch up with Wilson. Ethan says they can’t wait for an ambulance, Paul won’t make it, they have to take him now.

Paul is in surgery, there is nothing to do now but wait. Ethan gets the bullet out. Tanner is in the waiting room, he leaves to get a coffee when Gordon walks in. He says to Magnum that he can’t believe they let Wilson getaway. Higgins says this is on her, she did save the kid’s life.

Ethan comes into the waiting room, he tells Tanner that his brother is going to be fine and he can see him. Ethan thanks Higgins, then Magnum. All of a sudden, Mr. Wilson comes in, he finds out that Paul is going to be ok. He says he was never going to run, he just had to convince Paul to have the surgery, as he should have twelve years ago. He tells Tanner that he is going to jail, he just came to say goodbye. He says they needed him when they were younger, they are not kids anymore and they won’t be alone.

Susie shows Rick the painting that he commissioned her to paint, he loves it and so does TC. He wants to pay her, she says she just needs a job, she used to tend bar. Rick hires her, she leaves. TC turns around to Rick and says he likes and it is the only woman on the island that Rick can’t date now because she works for him.

Higgins and Magnum talk, he tells her that he wants a code of silence between the two of them, he doesn’t want to worry that she is going to tell Ethan, she agrees and promises to be more respectful in the future.