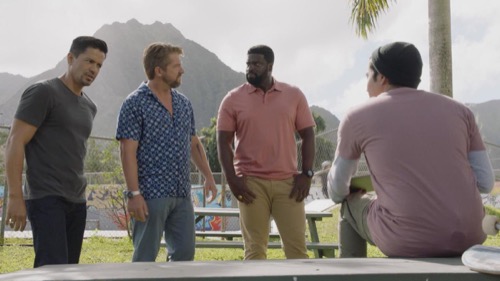 Tonight on CBS their reboot of the classic series Magnum P.I. airs with an all-new Friday, February 19, 2021, episode and we have your Magnum P.I. recap below.  On tonight’s Magnum P.I. season 3 episode 9 “The Big Payback,” as per the CBS synopsis, “When Higgins is abducted, Magnum discovers it’s retaliation related to one of his first cases on the Island, and he, Rick and TC must break out an ex-client from prison in order to save her.”

Rick tells Magnum that maybe he can ask Susie out for him, he really likes her. Magnum asks him if this is fifth grade. Rick says he is acting like TC. And, if Higgins can date her doctor, why can’t he date an employee. They are at the beach and all of a sudden, Higgins’ horse comes running, and she is not on it. The two start searching around and calling out her name. Magnum finds her phone, and Rick finds blood, and track marks. There are tire tracks, they have taken Higgins.

Gordon is fixing his son’s vehicle with him, making chit-chat. Gordon tells him the alternative is broken, but he will pick him up a new one. Magnum is calling, Gordon ignores it and tells his son they can go have breakfast together. Magnum keeps calling and his son tells him to pick it up.

At the bar, everyone knows Higgins has been kidnapped. Magnum doesn’t want the police to be notified. Magnum says he has been followed for a couple of months and now Higgins is kidnapped, maybe it is no coincidence. Magnum wants to keep Gordon out of it. He thinks maybe they are using Higgins to leverage him. Rick got off the phone Icepick, he has a name of a prisoner that is being moved, Elliott Handler, he hired Magnum to find his wife Keana, it was one of Magnum’s first cases, and he ended up putting Handler in jail. Gordon walks in and says that identified the kidnapper’s vehicle, but it is stolen. Gordon thinks this is linked to the person that was following Magnum and is asking them all to stand down. Magnum says Gordon is right, they have to step down. Gordon leaves and Magnum says they are not standing down.

We see Higgins, she has her eyes covered and her mouth has something in it so she can’t talk. She is hanging from metal chains, and her kidnapper takes off the covering and the rag in her mouth and she says he is planning to kill her because he would never have let him see her face.

Magnum and Rick go see a contact who is a hacker, they want him to check online and find out when Handler is being transferred. Meanwhile, Higgins is trying to free herself and she manages to get the chains loose. She leaves the room and heads upstairs, and sees her kidnapper, he doesn’t notice her and she runs outside, tries to jump the fence but doesn’t know that it is wired and it zaps her, she falls to the ground.

Magnum, Rick, and TC are mapping how to hit the convoy. Magnum tells them the story of why he turned on Handler. Magnum finds Keana, she said that her husband was just a criminal in a suit and he is dangerous. She claims she had to leave or she would end up dead like his first wife. Magnum looked into the first wives’ disappearance, it definitely was shady. The premise here is that Handler’s son, Miles, kidnapped Higgins because Magnum put his father away. They find where Miles was staying, he is not there and calls Magnum to say that he just got Higgins killed. Magnum says if he kills Higgins he will never see his dad again. Miles tells him he better stop that transport.

They stop the transport and get Handler. Gordon finds out that the prison transport was hit, and they were using blanks, not real bullets.

Gordon shoes up, he tells Magnum to work with him so they can get Higgins back. They tell Gordon the truth, and that Miles was very specific, no cops. They do the trade-off, but it doesn’t go well. Magnum drops his gun, and Handler picks it up, he shoots the tires on the truck they came in, lets Higgins go, but they take Magnum and tells Higgins it is going to be ok.

Gordon, Rick, and TC pull up, the put a listening device on Handler, it also has a GPS, they tell her to hurry.

Handler and Miles usher Magnum onto a boat, then Magnum says I guess your dad never told you about your mother. She was going to divorce him, so he made her disappear. Miles asks his father if it is true, Handler says no. Handler punches Magnum in the face. Miles is furious, he asks his father again if it is true and a scuffle breaks out, giving Magnum enough time to jump off the boat and run away. Miles runs after Magnum and catches up to him, to defend himself Magnum has to kill him.

Back at the bar, Susie asks Rick to dance, he finally gets his “date” time with her.

Magnum tells Higgins that he is glad that she is ok. Magnum then mentions to TC that he gave Susie a nudge.