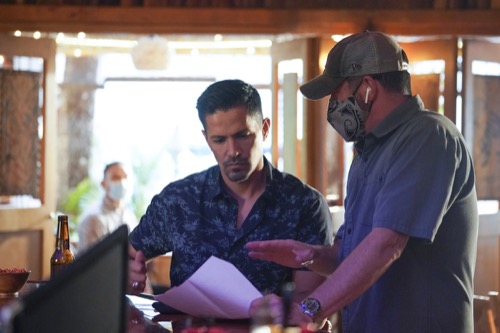 Tonight on CBS their reboot of the classic series Magnum P.I. airs with an all-new Friday, April 30, 2021, episode and we have your Magnum P.I. recap below. On tonight’s Magnum P.I. season 3 episode 15 “Before The Fall,” as per the CBS synopsis, “Magnum’s Uncle Bernardo (Steven Michael Quezada) visits and reveals a shocking secret about Thomas’ mother. Also, TC asks Higgins for help.

He realizes he may have witnessed a potential murder from his helicopter, Higgins decides it’s time to tell Ethan the truth about her past and TC offers Shammy the opportunity to become a pilot.”

In tonight’s episode of Magnum P.I., the episode begins with young Thomas, carrying a pail of water, and his uncle Bernardo who comes to help. Thomas sees a man working with a horse and asks his uncle why the man is hurting the horse, his uncle says they are breaking him. The horse was taken from his herd and he probably just misses his family.

Magnum is sitting with TC and Rick, he is telling them the story about the ranch and how he went there when his father died and his uncle became a father figure for him. Higgins calls Magnum, she is a game of chess with Ethan, but she wanted him to know that she looks forward to meeting his uncle tomorrow – they say goodnight. Higgins tells Ethan that Richard didn’t die in an accident, she had another profession before she became a PI.

TC is in the helicopter with Shammy, he tells him that business is picking up and he could use another pilot, he was thinking of him. Shammy doesn’t look thrilled. Shammy looks over and sees hikers on some dangerous walking bridge in the mountain, one has a red backpack, he turns to TC and says he thought hikers weren’t allowed to use that trail anymore. Later, TC tells Rick that he is surprised that Shammy wasn’t more excited about it.

On the news, a hiker was walking up dangerous stairs and fell to her death. TC turns to Rick and says he and Shammy saw that hiker when they were up in the air, she had a red backpack and she wasn’t alone, a guy was with her, maybe her death wasn’t an accident.

Magnum picks up his uncle Bernardo from the airport. Magnum brings him to Higgins’ home, he tells her that Magnum said she is an excellent partner. Then she tells him she owns the place and that technically makes her Magnum’s landlord and boss. Higgins leaves, his uncles say they seem like an old married couple. Then his uncle tells Magnum that he is getting married, once he met Anna he couldn’t let her get away.

TC goes to see Gordon and tells him that there were two hikers, that woman was not alone and it feels wrong, in his gut, he knows that she was killed and not that she fell. TC calls Magnum next, says he wants to hire him.

The deceased hiker’s name is Crystal, she was not married, she has a father that lives close by, Ryan Lockhart and her brother Gabe. Magnum says they should talk to them. Higgins tells him that he can handle it with TC, he should spend the time with his uncle. TC and Higgins are walking towards the Lockhart house, she tells him that she told Ethan about her MI6 days, Richard’s death, her vendetta.

They knock on the door, Ryan answers, they sit down and speak to him and Gabe. Ryan tells them the police said it was an accident. TC says he saw it with his own eyes, Crystal was not alone. Ryan tells them that he appreciates them looking into it, but they can’t add anything because Crystal always hiked alone and they only have what the police told them to go on.

Magnum has an infidelity case, uncle Bernardo wants to go along with him to see what he does. Rick tells Shammy he found someone who will fit the helicopter at cost so he can work with TC. Shammy says he doesn’t want the job, that is what TC wants, not him, and he doesn’t know how it feels.

TC and Higgins visit Crystal’s place, they see lots of family photos and when TC goes into the other room and he finds some newspaper clippings, police reports; it looks like Crystal was looking into unsolved murder of Raina Kahui killed last year. Higgins says this wasn’t any case for Crystal, there are photos of Raina with her in the living room. Crystal was looking into a friends’ death and now she is dead. One of Crystal’s most recent notes says, Harada. Chad Camrera, Raine’s boyfriend was the prime suspect in her murder but there wasn’t enough evidence to convict him and Crystal recently paid him a visit.

Magnum is with his uncle in the car, he tells him that he cannot believe that he is settling down. His uncle tells him that he should settle down with Higgins, there is chemistry there, but Magnum insists they are just friends. Just then, the client’s husband comes out of a building, they have to tail him.

TC and Higgins drop by to visit Chad and tell him that Crystal Lockhart is a dear friend of theirs. He says that Crystal has been harassing him for a year and now she sends other people to do it. He says he did not kill Raina, and when they tell him Crystal is dead, he acts surprised. Then he tells them they are not cops and to get out.

Magnum and his uncle follow the client’s husband into a building where he entered with another woman. They follow him and it’s a dance class, the man they are following says he is taking lessons to surprise his wife, she has no idea.

Magnum is having lunch with his uncle who asks him if he will be his best man. Magnum asks her who is she, the love of his life. His uncle says he waited too long, don’t do the same thing. His uncle tells him that when his father passed, he and his mother grieved together. Magnum says she was morning and he took advantage of her. He says no, it took him two decades to tell her and she said that she felt the same way. They only had two years together until she passed. Magnum is not happy, asks his uncle how he could do that with his brother’s wife, it’s wrong.

TC and Higgins go back to Chad’s office, they tell his employee that he knows he looped into the video, it wasn’t life. He admits that he wasn’t at the meeting this morning because he had an interview somewhere else, Chad is a crappy boss. And, he knows for a fact that Chad didn’t kill Raina because he was with him the night she died.

The week after Raina dumped Chad she got flowers at work, Chad spiraled and thought they were from a new boyfriend so he got drunk at a bar that night, called him and had him pick him up, and begged him to stop at Raina’s so she could give him another shot. When they got there, she was letting some other guy inside, so they left. Chad’s on probation for a DUI, if he admitted to being at a bar, he would have been in violation and gone to jail.

Higgins finds it weird that the guy didn’t tell the police the truth, he says Chad paid him off.

Higgins calls Harada florist, it was the last name Crystal had journaled. She calls the florist and they say the flowers that Raina received were from Gabe Lockhart, Crystal’s brother. He may have been the one going into Raina’s the night she died. Gordon calls TC and Higgins, tells them that Crystal’s autopsy shows that there was a struggle, someone threw her off that ridge. The DNA Is a 50% match to Crystal, someone related to her did this. So, to protect himself, Gabe killed his own sister.

Gabe is brought in for questioning, Gordon is sitting across from him while TC and Higgins are watching in from another room. He says he was never good with a woman, Raina said she was dating a guy at work, if things were different then maybe. He sent her flowers and she said she didn’t feel the same way about him, that he felt for her. He says she was staring at him with pity like he was pathetic, and he lost it. He goes on to say that she humiliated him, he was so angry and the knife was just there. Gordon tells him it adds up, but murdering his own sister.

Gabe says he loved his sister, he would never hurt her, they got it wrong. TC says to call him crazy, but he believes Gabe. Higgins has a hunch, she tells Gordon that she knows who killed Crystal, Ryan Lockhart, her father. The next stop is for Gordon, TC, and Higgins to visit him. He says he knew about Raina and he went on the hike to tell Crystal to stop investigating, he knew she was getting closer. He grabbed her by the arm, he wanted her to stop talking and she lost her balance. He is sorry, so sorry.

Shammy comes into the bar, Rick tells him that he is sorry, Shammy says he is too, he knows he was just trying to help. Shammy says every day he deals with people’s ignorance and having to deal with more of it in his work life, would be hard. When TC offered him the chance to pilot he got sick, he cannot think of being responsible for people’s lives. But since speaking to Rick, he believes he can do the job, but not right now, he is thinking about it though. Rick hands him a beer.

Higgins stops by to see Ethan, she is knocking on the door when he comes from behind her, she tells him that he has been ignoring her calls and texts all day. He says he needed time to think. She says she wishes her story was different, he says it is not about her past, he just wonders if there is something else that she is not telling him. She says she has told him everything and her feelings for him are very real, she loves him.

He says he loves her too but right now, when he looks at her, it’s not the same, he doesn’t know if he can trust her and he has to see if he can figure that out. He is going to be going out of the country for a while, doctors without borders, he is going to Kenya for six months, he thinks they could use some time apart. She says it is not what she wants, but she understands if that is what he needs. He says it is what he needs.