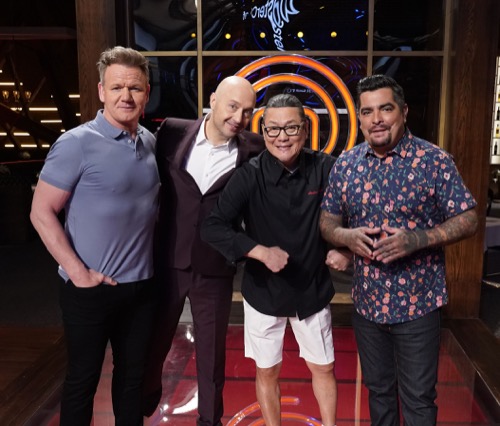 Tonight on FOX Gordon Ramsay’s Masterchef returns with an all-new episode on Wednesday, June 23, 2021, season 11 episode 4 called “Legends: Chef Morimoto – Monkfish Challenge,” and we have your weekly Masterchef recap below. On tonight’s Masterchef episode as per the FOX synopsis, “Legendary Michelin Star chef Masaharu Morimoto sets the bar high with his monkfish demonstration, leaving the cooks desperate to impress in their first elimination challenge.”

The episode begins with the top 15 best home cooks in America and they are welcomed by Chef Gordon Ramsay. This is MasterChef Legends and this season they are bringing the culinary world’s biggest names right here on MasterChef. Tonight’s guest owns over a dozen restaurants in six countries, has a James Beard award, a Michelin Star, and a spot in the Culinary Hall of Fame, it is Morimoto. Morimoto says his mom inspired him to cook.

He has a special demonstration for the home cooks. A fish descends from the ceiling, it is a monkfish. Mary Jayne looks like she is going to be sick when Morimoto debones the entire fish in less than a minute. Everyone has to prepare an incredible monkfish dish and the winner will win an incredible dinner for two at the beautiful and elegant Morimoto restaurant in Las Vegas. The home cook that does not meet their standards will be eliminated. They have one hour to prepare a stunning monkfish dish.

Tay has never made monkfish, but he is up to the challenge. Elyce’s strategy is to stay in her comfort zone with this fish. Autumn hates seafood and she is afraid of fish. Joe says monkfish is the kind of fish with rules, it doesn’t want to be grilled, probably wants to be floured, it wants acidity. Kelsey is getting outside of her comfort zone, she is doing Asian flavors.

There is a lot going on in the kitchen, a lot of intensity. Gordon tells Monk not to overcomplicate it, the monkfish is the hero. Tay was going to do a monkfish sandwich, but he didn’t realize how watery the monkfish is – Gordon tells him that he doesn’t want to eat a soggy diaper. Tay scraps everything that he is doing, he goes back to the pantry – and he only has 24 minutes left to go.

Chef Gordon tells the home cooks that the judges are going to walk around and take a closer look at their dishes. Annai lost track of time and used store-bought tortillas instead of homemade ones. Josh didn’t put salt in his rise. Kelsey is confident. Miles’ visual is beautiful. Tay changed it up and Gordon is glad that he did.

There are three dishes that will be highlighted. The first is sophisticated and had a great flavor profile, Kelsey. She made a Pan Seared Monkfish with Cauliflower Two Ways and Fish Sauce Caramel. Morimoto says it is great, Gordon loves the creamy cauliflower, Aaron says it is bold, Joe loves it.

The second dish featured a pan-seared monkfish and some really delish-looking Asian flavors, Autumn. She made Teriyaki Glazes Monkfish with Ginger Rice, Sauteed Bok Choy, and Pickled Fried Cauliflower. Gordon says the monkfish is cooked beautifully, Morimoto loves it, Aaron loves the cauliflower, Joe says it is a restaurant-quality dish.

The final dish used a flavorful glaze and did not overcomplicate the dish, Suu. She made Ginger & Kumquat Glazed Monkfish with Butternut Squash Puree and Sauteed Mushrooms & Sugar Snap Peas. Gordon loves the fish he says she nailed it, Aaron loves the mushrooms and the sesame seeds, Joe says the flavors were clear and brilliant, Morimoto said it was too spicy for him.

Three great dishes, only one will win, it is Kelsey. Both Autumn and Suu are safe and they all head up to the balcony.

There were a few dishes that did not meet the judge’s standards, the first dish had significant changes late in the game, Annai. She made a Drunken Monkfish Taco with Citrus Pickle Coleslaw and Chile Rojo Salsa. Morimoto says the monkfish tastes bland, he doesn’t taste any seasoning. Aaron says the slaw saves her, he wants too much more of it. Joe says the sauce is delish, the rest is like the second choice. Gordon says the fish is cooked beautifully.

The next dish belongs to a home cook from the south who missed multiple marks from their dish, Alejandro. He made Five Spiced Monkfish with Creamed Potatoes & Leeks, Mussels, Broccolini, Asparagus, and Cucumber Garnish. Aaron says the dish sounds complicated. Gordon says it is cooked beautifully. Aaron says the composition is so bizarre. Gordon says to think about his dish next time and take 1/3 off.

The final dish they want to taste belongs to a mid-western home cook, Elyce. She made Baja Fish Taco with Spicy Aioli and Chips. Joe says he cannot even qualify it like a taco, it is fried fish in a shell, it is soggy with a series of mistakes. Aaron says he enjoyed the seasoning on the fish, but the cumin overpowered it. Morimoto says the fish was undercooked, but he lied the chips.

The judges have some serious talking to do before they make a decision. The person leaving the Masterchef kitchen is Elyce. The dish did not scream exciting taco, it fell short. Gordon tells her to keep her head up high