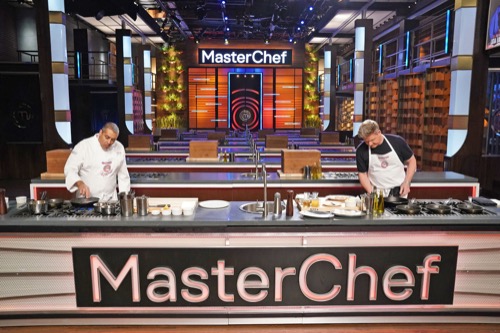 Tonight on FOX Gordon Ramsay’s Masterchef returns with an all-new episode on Wednesday, July 7, 2021, season 11 episode 6 called “Legends: Michael Mina – Meat Roulette,” and we have your weekly Masterchef recap below. On tonight’s Masterchef episode as per the FOX synopsis, “It’s the home cooks’ first Mystery Box challenge, and to add to the pressure, Michelin Star chef Michael Mina is the guest judge of this week’s challenge. The cooks must create a MASTERCHEF-worthy beef dish without knowing what cut of beef they will be cooking until the mystery box is opened.”

The episode begins with the stakes being higher than ever to avoid elimination. The contestants this season are working alongside legends and up first tonight was a Mystery Box Challenge. It was the first time the contestants have dealt with the Mystery Box Challenge. There were boxes left at the workstations. The contestants saw them as they came in and there were also in for another surprise. Mary Jane dropped out of the competition. She became sick and she could no longer compete and so she’s returned home. Her absence doesn’t save anyone. They still had to fight to stay in the competition and the challenge is how they stand out. The challenge tonight was beef. The contestants were given unusual pieces of beef and they had to make a dish that no one has ever seen before. And to help show the contestants how to cook these pieces of meat was legendary Chef Michael Mina.

Chef Mina owns several restaurants and he is known for his steak. Both Chef Mina and Chef Ramsay did a demonstration of cooking beef dishes for the contestants. The contestants took notes. They asked questions. They did everything they could to soak up the cooking lessons. Then they unveiled their boxes. There were some contestants that were happy because they got steak pieces and one woman was upset when she got beef cheeks. She has never eaten beef cheeks or cooked them. She had no idea how to turned beef cheeks into a restaurant-worthy dish. She also wasn’t alone in panicking. Even those that got great parts of the cow were worried because they didn’t want to ruin their somewhat easier dishes.

Take Matt. Matt was in the bottom three last week and so he let that get to his head. He panicked overcooking a filet mignon. It was one of the easiest pieces of meat because everyone knew what to do it with and yet Matt panicked because he didn’t want to fail at the dish or risk being in the bottom three again. Abe went the other direction. Abe had also been in the bottom three and somehow he was worried about his dish. He was cooking sweetbread. He’s never cooked that part of the meat before nor has he ever eaten it and so he should be worried and somehow he wasn’t. his game plan was just to fry them. He also said he got this. Which might as well have jinxed him. the judges came around and they tried to give him only it didn’t seem to have filtered in with him.

It didn’t work on Matt. Matt was told to kiss the pan with his meat and he instead overcooked it. There were twenty minutes left on the clock and he had to start over. Kelsey meanwhile was taking risks. She put her meat in a beer mixture to help break it down and she was going to do a rub with chili and coffee flavoring mix. Then there was Lexy. Lexy has never cooked skirt steak. She decided to cook a jam to go with it and it lacked shallots and yet it had raisins. The judges were already making faces at what that dish would taste like. There were risks and then there were risks people take when they have a death wish. Some many of the contestants skirted between these two risks and one person made a critical error. Anne plated two dishes.

Anne was so worried that about the beef cheeks that she made two plates. The idea behind it was so that she could put the best plate out of the two up for consideration and so how the plan falls apart is that she wasted so much time on plating two dishes that the only dish she completed didn’t look half as nice as it could have been. But at least it wasn’t Matt’s dish. Matt tried to cook the perfect meat and he overdid it and so he cooked the second piece and he served it undercooked. Time was called. The judges went around tasting it and later they called up the top three dishes. The first dish they called was Abe. Abe surprised everyone by delivering a great-looking and great-tasting dish. The next dish to be called was Joseph’s.

Joseph’s dish looked beautiful. It tasted great and everyone loved the sauce he cooked because they said it was delicious. The next dish to be called was Kelsey’s. Kelsey’s dis looked great and it tasted even better. All three of the top dishes delivered on flavor. If anything, the judges asked for more sauce and not less. They deliberated and they named a winner. The winner of the first Mystery Box Challenge is Abe. He was so shocked that he shouted “holy sh*t” out loud. The judges next named the three worst dishes of the night. Up first was Anne. Anne’s meat wasn’t fully cooked. Beef cheeks needed longer time in the pressure cooker and she should have cut them before they went in because that could have helped her. The next person called was Lexy.

Lexy messed up meat as well as her side dishes. Lexy’s jam was great but they needed a sauce for the meat because it tasted dry without one and then there were her potatoes. The potatoes were undercooked and under-seasoned. It tasted horrible. It made all of the judges angry at just looking at it. The next and last person called was Matt. Matt undercooked his meat. He didn’t hit any of the components with the dish and so the choice was easy.

The judges eliminated Matt for his terrible dish.