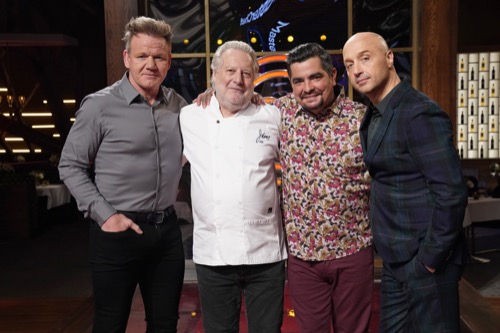 Tonight on FOX Gordon Ramsay’s Masterchef returns with an all-new episode on Wednesday, July 21, 2021, season 11 episode 8 called “Legends: Jonathan Waxman – California Mystery Box,” and we have your weekly Masterchef recap below. On tonight’s Masterchef episode as per the FOX synopsis, “The top 10 home cooks take on a Californian Mystery Box Challenge, with Michelin Star Chef Jonathan Waxman as guest judge. It’s the highest stakes challenge yet with an elimination no one sees coming.”

In tonight’s Masterchef episode, the journey to the “Top 10” has been long and sometimes painful to watch. The contestants walked into the kitchen tonight to find mystery boxes and so it was a Mystery Box Challenge. The box held Californian ingredients. It was the best of the best and there to show the contestants had to handle the challenge was Jonathan Waxman.

He put Californian cuisine on the map. He was an amazing chef and he was also the personal mentor to Chef Aaron. Aaron lost his father when he was young. He came to see Chef Waxman as a surrogate father as the older chef mentored him and so this challenge was just as important to Aaron as it was to Waxman. The challenge was that the contestants had to cook with all five ingredients and the winner receives a prize. The winner will receive a dinner at Chef Waxman’s prestigious NYC restaurant.

All the home cooks wanted to win that reward. They also came up with unique dishes that relied on all five ingredients and so the first person to struggle with this challenge was Alejandro. He was allergic to shellfish. He tried to take the shell off with gloves and knives and he inadvertently butchering his dish than saving it. The judges noticed and they wondered what was going on.

They later realized it was his allergies that was making butchering the prawns. The judges started walking around to inspect everyone’s progress. They were astounded by some of the plans they’ve heard and they were also worried. They spoke with Michael. Michael is a vegan. Cooking proteins is hard for him and so he tends to overcompensate.

The chefs had to warn him that he needed to make sure that all the parts of the dish go together. His original plan had sounded like three different dishes and so the chefs reminded him to bring it together. Then there was Joseph. Joseph cooked his prawns early. They take twenty seconds to cook and should have been cooked at the very end, but Joseph jumped the gun and now he needs prawns.

He had to go around asking his fellow contestants if they had any prawns. Luckily for him, they had some and he was able to get enough prawns on his dish. Joseph is usually calm and collected. He was all over the place tonight and meanwhile Jay was overconfident. Jay swore up and down he had this. He was so proud of himself and he hadn’t even been judged yet.

Suu was the one that had the judges talking. She was cooking a salad with everything in it and she turned the grapefruit into grapefruit vinaigrette and so the judges thought her dish sounded the most interesting. They were paying close attention to her. They saw how she literally left the prawns until the last minute and they got scared. The judges have been telling everyone that prawns take twenty seconds. Only that doesn’t mean to leave everything to the last twenty seconds. The home cooks struggled with time management and it showed. Time was eventually called. Everyone had to put their hands in the air and then came time for judgment. The judges walked around the kitchen.

They looked at everything. They didn’t taste everything. They judged and then they walked back to the podium. The three dishes they later called up to the stage was Suu. She cooked Grilled Spot Prawns with Uni Butter, Avocado, and Grapefruit. Suu was also celebrated for having to wait to cook at the last two minutes in the competition.

The chefs said she acted like a real chef that night and they loved the taste of her dish. Next up was Abe. Abe cooked Broiled Pawns with Uni Butter, Avocado Crema, and Grapefruit. His dish too tasted delicious. The judges loved it and they loved how he plated it. They said it was great because everything came in one bite. Next up was Autumn. Autumn cooked New England Style Chowder with Citrus Seared Prawns.

The judges have never seen clam chowder with prawns or even avocado or uni or grapefruit. She managed to take all the ingredients she had been given and turned them into something spectacular. The winner of this challenge went to Suu. Her dish was the best and she was glad to have a win. The judges were done with the best dishes and they started to focus on the worst dishes.

They called up Alejandro. His dish was all over the place. It also didn’t look visually appealing. Alejandro was back in the bottom three because of this dish tonight. Next up was Tay. Tay forgot the uni butter. He also confessed to the judges that he forgot the uni butter and so that had no other choice than to put him in the bottom three. If he had just added that extra ingredient, he would have been in the top three. And so that must have hurt.

Next up was Joseph. Joseph lost his cool and he was never able to regain it. He cooked pasta when it was the worst decision he could have made and surprisingly he wasn’t eliminated for it. Tay was eliminated. Tay failed to get all the flavors on the plate in time.