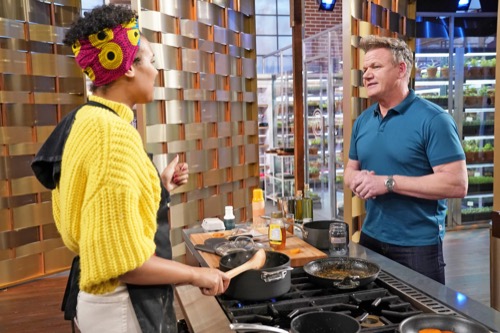 Tonight on FOX Gordon Ramsay’s Masterchef returns with an all-new episode on Wednesday, August 18, 2021, season 11 episode 10 called “Cook For Your Legend,” and we have your weekly Masterchef recap below. On tonight’s Masterchef episode as per the FOX synopsis, “Chef Ramsay challenges the home cooks to create a dish for the most important legend yet – their own personal legends.

Their personal legends could be someone they look up to, a personal hero, or even a family member who inspires them. One home cook’s dish will end up on the chopping block.”

In tonight’s Masterchef episode, things are getting serious. The black aprons are out and what’s more, tonight is going to be an Elimination Challenge. An Eliminated Challenge is when everyone cooks for their lives. Joseph was safe because he won the last challenge and so he was sitting up on the balcony while down below everyone scurrying about.

Tonight’s challenge was to cook for your personal legend. The contestants had to cook for the people who are legends to them whether they’re loved ones or one of the judges. They had to cook with them in mind. It also had to be a restaurant-worthy dish. Lexy was cooking in honor of her husband and so she wanted to cook his favorites. She wanted to cook fried chicken with sweet potatoes fries and cornbread.

Autumn was cooking in honor of her friends. She and her friends went to South Korea and so she was going to make a Korean dish in honor of nostalgia. Autumn’s dish sounded like it was going to be super complicated. Lexy’s dish on the other hand sounds a little too easy. Her dish is what the judges were fearing.

They feared that the contestants might go backward in name of nostalgia and in a competition there is no such thing as going backward. Not even for the ones you love. Every contestant is supposed to be pushing themselves forward and they should be hoping for the best. Anne was pushing herself forward. Her legend was her family. She remembers going over to her grandmother’s after church to eat fried chicken.

Only Anne didn’t just want to make fried chicken. She decided to upscale the dish by frying quail instead. Quail isn’t like Chicken. They have different tastes and textures. Anne was taking a gamble by cooking it but she said she was doing it because the fried chicken would be too easy and that again brings up Lexy.

The judges were walking around and they came across Lexy’s dish. They thought it might be too simple. They tried to warn her that it might be too simple and she said “no”. She replied that this is the most confident she’s ever been and that she couldn’t get it wrong because it’s one of the few things both she and her husband can agree on during thanksgiving. And so nothing is going to shake Lexy’s confidence in her homestyle meal.

Abe was also doing something from home. He was making shepherds’ pie because he went to school in London for two years and it was the first dish he made when he came back for his parents. His parents loved it. Abe loves them and so he’s chosen them to be his legends. Suu’s legend was her grandmother.

She was going to make a coconut panna cotta in honor of her grandmother and she was the only one making desert. Everyone else chose a main dish for their legend dishes. They also had to deal with Joseph. Joseph was “helping” from the balcony. He was checking in with people and he was also telling the judges who he was worried about. And he was worried about Anne because she was running back and forth a lot.

Joseph thought it was panic. She said it was controlled chaos. Anne plated her dish in time and she felt good about it. Lexy also felt good about her dish. Then came time for judging. The judges were going to taste each and every dish. The first dish they called was Kelsey. Kelsey cooked pork chops and she elevated it. The judges all loved her dish. They thought it looked and tasted like it could be on a menu in the restaurant. However, they thought the worst of Anne’s dish. Anne’s dish was wrong all over. Her main dish was the quail and she drowned it in the batter. There was just so much batter that the sauce that went with it had turned the crumbs into mush. Anne’s dish was horrible. She tried to elevate a homemade dish and she failed. She failed miserably.

Next up was Alejandro. His personal legend was Chef Ramsay. He was a bit of a butt kisser but his dish was great. He worked wonders in the flavors and his dish was so great that Joe didn’t think Alejandro cooked it. It was one of the best dishes he ever mastered and so that’s the chef the judges wanted to see in the future. Next up was Michael. He cooked a dish inspired by his grandmother and it had been good. It wasn’t great. It was just good and so the highlight really was that it wasn’t as bad as Anne’s dish. Then Lexy was called. Lexy’s dish was boring. Her sweet potatoes were too sweet. Her collard greens tasted great while the chicken was boring. She didn’t even have dipping sauce for the chicken.

Next up was Abe. Abe’s dish was a hot mess. It was supposed to be a shepherd’s pie and instead, it looked like soup. There was a heavy layer of mashed potatoes. He also cooked his meat in beer instead of wine yet his dish was seasoned well and it tasted great. Suu’s dish also tasted great. Her panna cotta looked beautiful and tasted delicious and so Suu showed herself a true threat in the competition.

The judges later went off to discuss who they should eliminate and when they came back they announced everyone in the bottom three. Anne, Lexy, and Abe. And the one they sent home was Lexy because she should have upgraded her fried chicken.