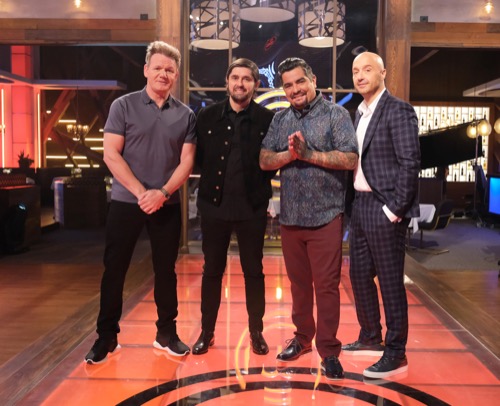 Tonight on FOX Gordon Ramsay’s Masterchef returns with an all-new episode on Wednesday, September 1, 2021, season 11 episode 13 & episode 14 called “Legends Dinner/Ludo Lefebvre,” and we have your weekly Masterchef recap below. On tonight’s Masterchef episode as per the FOX synopsis, “Dominique Crenn, the only female chef in America to attain three Michelin Stars, visits the MASTERCHEF kitchen with a brand-new team challenge – the cooks must pair up and make the same exact dish…without being able to see one another.

The contestants had a team challenge awaiting them when they entered the kitchen. The team challenge was a Restaurant Takeover and the teams were decided on gender. It was boys vs girls.

The team captains were picked by the judges. They selected Alejandro and Autumn as captains. The two had to lead their teams into creating the perfect dish for their Chef’s table. They were cooking for four legends. The legends are Tanya Holland, Jonathan Yao, Val Cantu, and Sherry Yard. Chef Yard was there at the beginning and so it’s only fair that she sees how things are going towards the end. But this legendary group was also hard to cook for. They all have different backgrounds and different palates. Cooking for them was going to be tough.

Alejandro ran his kitchen with a firm hand. He basically decided the whole menu and he gave different parts of the dish to different members of his team. Alejandro assigned himself protein. He gave vegetables to Mike. He also gave garnish to Abe. But the girls’ team was completely different. Autumn didn’t lead her team. She delegated most of the responsibility and that led to them speaking over each other and being undecided about their menu. They were fragmented. Kelsey also injured herself in the kitchen and Autumn went to pieces when she saw it because she wasn’t good with blood. Besides that, there was also the issue with what they were cooking. They were cooking a bunch of stuff so that they could taste it and decide what works best and that was eating time.

It was after they ate up a bunch of time panicking that they realized one of their purees was crap. The boys’ team had the opposite situation. Alejandro was so controlling that he tried to do everything himself and he wouldn’t delegate a single thing. He tasted everything. He threw out what Mike did with the puree because he said it was too salty and Mike said it wasn’t. Mike is a vegan. He should know his vegetables and Alejandro needed to trust him. Then there was Abe. Abe finished what he was supposed to do and then he was left with nothing to do. Alejandro wouldn’t ask for help at all. His leadership was more like a dictatorship. He also was messing up the one thing he’s good at.

He was messing with the protein. Alejandro didn’t get the right cook on his scallops because he refused help and so they served them under. Time was eventually called. The Blue Team’s dish didn’t look finished and it was in fact rushed. The Red Team’s dish looked better and it tasted better. Only it felt more like the main entrée than an appetizer. The two teams went back to cooking their main dish and Autumn found her voice. She began dictating to the other two and she also seems to have held Suu’s hand because Suu was all over the place. She didn’t know how to cook the steak. She didn’t know how to cut the duck. She also forgot to season her meat and had to be reminded by Chef Ramsay.

Communication broke down on the boys’ team. They waited to cook their steak and once again Alejandro tried to do everything while Abe was just lost. Abe had no idea what he was doing. Chef Sanchez came around and he told them to start cooking their meat. He also told Alejandro to accept help but that just made the problems on their teams were and not better. Both Abe and Alejandro had undercooked the protein. They thought they were done and they didn’t realize their mistake until Ramsay came around and cut one of the steaks open. He cut it open only to find it raw inside. They had to reheat their meat. They managed to cook it and the Red Team delivered on their duck. The legends enjoyed the Red Team’s dish although they thought the curry addition was an odd choice.

The Blue Team did better than the last round. They eventually got their steaks to the right position and so the problem with their dish was the puree. The puree was too thick. Some said it tasted like buttercream because it was so sweet when a puree needs to be light and fluffy. In the end, the Red Team won the challenge. They won in spite of Kelsey cutting completely through one of her fingers and both Autumn and Suu being frazzled at the time. The Red Team earned their victory but the Blue Team also known as the boys’ team was the loser. They were in the bottom three as a team and only one was eliminated. The person eliminated tonight was Abe. The judges just felt he never had a voice in the kitchen nor did he try to achieve one and so that’s why they sent him packing. Hopefully, Abe will learn from this and become an even stronger chef.

The remaining contestants later returned to the kitchen to find a new challenge waiting. This time they had a Mystery Box Challenge and they were going to be cooking for legendary Chef Ludo Lefebvre. Many of the contestants feared that their mystery boxes would be about French food but instead, it was clocked. They each were given a clock with seventy-five minutes on it. The clock was there because there were going to be two rounds to the challenge tonight. They had to cook their first dish and stop the clock once they were done. If their first dish was good enough for the judges and the legendary Chef, then they would go up to the balcony and be safe from elimination. If the dish was not good enough then they will have to cook their second dish with whatever time they have left on the clock. And the worst dish of the bunch is the one that will be eliminated.

Each contestant was cooking some very French or as French as they can get. Alejandro was taking the biggest risk of all by cooking duck a l’Orange. Both Kelsey and Mike played it safe by making soups. She cooked French onion soup while he cooked potato leek soup. Autumn cooked mussels with fries and the only thing wrong with her dish was that there wasn’t enough broth. The judge said she should have used a deeper bowl. Mike’s dish was judged next and the judges didn’t care for it. They couldn’t find a nice word to say about it. Kelsey’s dish was next. The judges loved her dish. They loved the simplicity while they hated Suu’s lack of care. Suu’s pork chop was undercooked. Everything else about the dish had been perfect but not the protein.

Alejandro’s dish however was perfect. His duck was delicious and the judges didn’t have one bad word to say about it. Alejandro won the Mystery Box Challenge. It was his first win on the show and he had been so happy that he practically skipped to the balcony. Next up was round two of the challenge. Everyone wanted to keep in the French routine and they tried to go big and unfortunately, that didn’t work for everyone. Mike for one was someone in trouble. He cooking a chicken dish and he, unfortunately, took it out of the pan too early. The judges spotted it. They saw the critical error and they easily realized that Mike’s dish would come under parr. But that wasn’t the first dish they judged. The first dish was Autumn’s crème brule. Her dish tasted delicious and they had been surprised to see her make it in under forty-five minutes.

The next dish to be judged was Mike’s. Mike’s chicken was raw and his sauce was great. The sauce was the only good thing about the dish. Only that couldn’t be said of Kelsey’s dish. Her dish was supposed to have a nut-brown sauce and her dish instead looked dry and like it had been put in regular butter. Kelsey knew her dish was horrible. She cried as she was presenting it. Then there was Suu’s dish. Suu’s dish was restaurant-quality. She and Autumn both delivered tonight. They were both safe from elimination. The bottom two tonight were Kelsey and Mike. They both underperformed like never before and so it was toss up on who would go home, but the judges decided to eliminate Mike. Mike’s dish was the worst of the night and that’s why he was sent home.