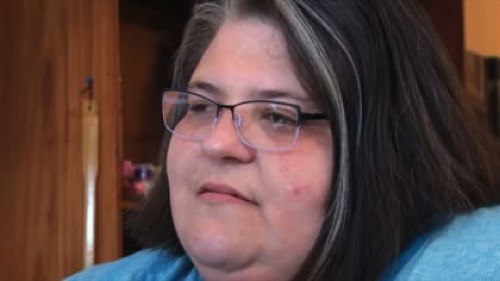 Tonight on TLC their fan-favorite series My 600-lb Life airs with an all-new Wednesday, March 3, 2021, Season 9 Episode 10 and we have your My 600-lb Life recap below. On tonight’s My 600-lb Life season, 9 episodes 10 called “Shannon’s Journey,” as per the TLC synopsis, “Shannon’s husband loves her, but he is perpetuating a toxic cycle.

In My 600-lb Life’s episode tonight, Shannon Lowery is thirty-nine. She lives in Tucson, Arizona with her husband and she is morbidly obese. Shannon doesn’t know how much she weighs because she hasn’t weighed herself in years. She doesn’t eat right. She doesn’t exercise. She’s big and that’s because she turned to food to handle the trauma she faced as a child. Shannon grew up in an unstable environment.

She moved around a lot because her parents hadn’t been able to take care of her for long and so she’s lived with every relative possible. She was happy for a while when she lived with her dad and stepmom. Her stepmom treated her as if she were her own. She provided Shannon love and affection but then her dad and stepmom divorced and it was bad. Her brothers went to go stay with their mom and she stayed with her father.

Shannon’s father was absent a lot. He more or less left Shannon on her own and so she started eating. Which turned into a problem. Shannon’s parents didn’t get along and the first thing her mother said to her after seeing her in years was that she had gotten big. Shannon then moved in with a great-aunt. She stayed there for about a year and then she moved in with her mom and stepdad.

However, her stepfather was abusive. Shannon’s mother was disabled and money was tight. She often let Shannon know that she couldn’t really afford her. She later gave Shannon up because she didn’t want to be in charge of Shannon and so Shannon was again shuffled around. She eventually went back to her mother’s.

There was an incident with the stepfather. Her stepfather was going to hit her mother during an argument and Shannon stepped in between them. She was punched in the mouth. Shannon then tried to call the cops and her stepfather removed the phone cord out of the wall. He also stopped Shannon from leaving by pulling a gun on her.

It had taken her cousin stepping in to get the gun away from her stepfather and afterward Shannon called the police. Her stepfather was arrested. He went to jail and Shannon left her mother’s house. Shannon bounced around again until she eventually went to live in a care home because her weight had gotten too difficult to deal with and during this time that she met her husband. She met him online. Their relationship developed from there and soon the two moved in together.

They have never lived as husband and wife. Simon was basically her caretaker because she couldn’t do things for herself and he was the one who took care of her. He washes her. He gets her food and he even cleans up after her. Shannon is not an active member of her own life. Her whole world actually revolves around her bed.

She hates getting up in the morning because she doesn’t like moving too much nor does she have the will to want to leave. She just stays in bed. She doesn’t leave the bed to shower or to change her clothes and she simply lays about all day. Shannon doesn’t watch television. She gave up adult coloring books years ago and so most of the interaction she has with other people is through social media.

Dr. Now wanted to run tests. He wanted Shannon to be checked over. The doctor needed to know if any life-threatening issues were going on besides her weight and his fear was that she developed a blood clot. Only Shannon was weighed while she was at the hospital. She came in at 739 lbs and Dr. Now was not happy with her. He had given her a plan. It was an exercise and a diet plan.

He thought she would at least try to lose some weight before he next saw her and she hadn’t. She continued her old lifestyle. She ate whatever she wanted and she didn’t work out. Shannon was later asked about that. She came up with excuses of course. She first tried to tell the doctor that she tried to lose the weight and then he pushed her about it and so she admitted that she hadn’t done anything he suggested.

Dr. Now asked if it was Simon bringing her the food or her demanding it. She admitted to him that it was both as in she pushes her husband until he gives her what he wants and sometimes gives her the food just so that he wouldn’t face another argument with her. Dr. Now Shannon that was unhealthy. He didn’t like the dynamic between her and her husband. He also learned that she suffered from multiple health issues.

Dr. Now told Shannon she was living on borrowed time and so he tasked her with losing 150 lbs. He wanted her in the 500s again. Dr. Now had Shannon stay in the hospital for the next couple of weeks and she improved greatly. She lost a good amount of weight. Dr. Now told her how well she was doing and he told her that she had to maintain this once she went back home.

Shannon struggled some. She had to learn portion control because in the beginning she would just eat a lot of the healthy things and that wasn’t helping her. So, Shannon cut back. She stopped eating after a certain time. She ignored her stomach even as she didn’t feel full and she and Simon both were on track. They didn’t even let the messed-up dynamic get in the way of things.

Shannon was doing so well that it was horrible when Covid-19 because they issued a stay-in-place order and suddenly she was trapped at home again. She couldn’t travel to Texas. It was seven months before she next saw Dr. Now and it was clear that she hadn’t lost the weight. She actually seems to have gained in the time away and so the nurse hadn’t thought it possible that she could fit on the scale.

Shannon was too big to be weighed. She also put a lot of pressure on her body to make the trip again and so Dr. Now was frustrated with her. He asked why did she come? Why did she make the trip if she wasn’t going to stick to the diet or exercise plan? Shannon was at the point where it was a task just to get her through the door and so where did she go wrong? Dr. Now asked Shannon about his.

She told him that it’s been stressful since the pandemic began and it was easier returning to her old lifestyle. Her husband was no longer helping her. He was hurting her by giving her all that food she didn’t need and so he was back to his enabling ways, but Shannon couldn’t see that. Shannon said she wanted to get the surgery. She said she was willing to do anything to get it and so Dr. Now told her that she has to lose 150 lbs in the next two months.

The doctor was trying to save her life here. Dr. Now wanted Shannon to get healthy for herself and she wants that too. It’s just been a struggle. Shannon returned to the plan that Dr. Now laid out for her and she even started going to the gym. She doesn’t drive and neither does her husband, so she took her motorized chair to the gym. She would do exercises from her chair. She would work on her arms and her trainer was a very nice young lady. She helped support Shannon throughout the workout. And by her next appointment with Dr. Now, Shannon felt confident enough to get weighed.

Shannon is now 698 lbs. There’s no telling how much she lost because she wasn’t weighed last time though it still was progress and so Shannon has to up her game.

Shannon and Simon were going to move to Houston. She was also cooking for herself now and so she was making some improvements.