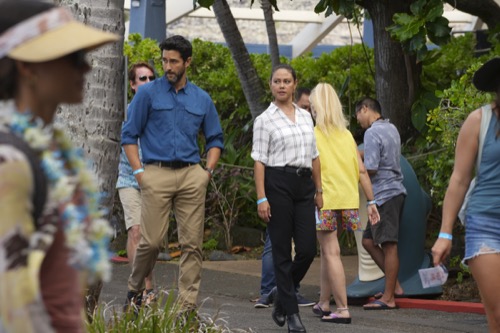 Tonight on CBS NCIS Hawaiʻi returns with an all-new Monday, November 1, 2021, season 1 episode 6 called, “The Tourist” and we have your weekly NCIS Hawaiʻi recap below. On tonight’s NCIS Hawaiʻi season 1 episode 6, “The Tourist,” as per the CBS synopsis, “When Tennant and NCIS are tasked with finding a kidnapped globe-trotting social media star, they find that she is not who her husband, or her followers, think she is. Also, the team is at odds with Whistler, who has an agenda of her own.”

In tonight’s NCIS Hawai’i episode, NCIS was called in for an abduction. Navy Lieutenant Adam Parish was enjoying his honeymoon with his new wife Kayla Barlow when she disappeared into a crowd and he later spotted her being driven away. Parrish reported it as an abduction. He said no way would his wife leave with a stranger. They weren’t fighting and that they had been enjoying themselves by making a video.

Parrish was recording a video of his wife dancing when she disappeared into the crowd. Parrish believes his new wife was kidnapped and unfortunately he didn’t have much information on the person who took her. he could that it was a man. He also got footage of the car as it was driving away because he was still recording and so he searched for it signs. And he handed it over to Tennant’s team in the hopes that they might find something.

Kayla was a social media influencer. She traveled the world and made videos on meeting people and learning about their culture. Her new husband is her complete opposite. Parrish spends months on a submarine as a weapons officer. He’s in charge of missiles and torpedoes. Tennant and her team thought that maybe Kayla was taken as a way to get to Parrish but they found the man that drove away with Kayla and he was killed.

He had been beaten to death. The team thought that Kayla fought off the guy and if that was the case then why didn’t she come forward right after it happened? There was security footage showing Kayla leaving the late John Casings’s body. The also checked the footage of the party and Kayla left with Casings.

The abductor in this case became the victim. The team looked into Casings and he seemed like a normal guy who just happens to be in the same country as Kayla for the last year. Casings also has been sending her messages on Instagram using secret code. Tennant’s aunt was on the island visiting and she was former CIA. She suspected the code could mean something more.

Tennant followed it up and sure enough Kayla wasn’t a real social media influencer. Casings had bought out ninety-five percent of her follows. She only had twenty thousand real followers. She was secretly using the international travelling as an excuse for something and no sooner did they suspect CIA that DIA Special Agent Whistler came in to shut down their investigation.

Washington DC called. They didn’t want the team looking into Kayla and so Tennant was told to drop it but she couldn’t. She had her team meet with her in secret. Together they searched social media and they found a post from Kayla to her husband. She asked him to meet her at the dolphins sea park. The team went there. They found Kayla and they got her to turn herself over to them but someone ambushed Kai and he lost sight of Parrish.

Parrish was escorted out of the water park by some stranger. Kai didn’t get a good look. The only thing he saw was that Parrish was gone and he could only have been taken because her enemies wanted is to use him to get to his wife. Kayla later admitted to being CIA. She used her traveling background to help people around the world defect from hostile countries.

a story about how he got away and that he needs to meet up with her where there were no cops. Kayla agreed to it. Only she and everyone else who listened in on the call knew, it was a trap. The team set up an operation in which they followed Kayla and had her meet with her husband in a public place. The people passing by were all FBI Agents and so they quickly arrested the Russian mercenaries and they freed Parrish. He was reunited with his wife. She now has to explain to him that she wasn’t just a social media influencer. And the team didn’t get in trouble for interfering with the case.

Tennant is former CIA. She still has plenty of connections there and she was able to safeguard her position. She also talked to her aunt who was also CIA and her aunt had apparently dropped enough hints with this case because she might not be as retired as Tennant believes