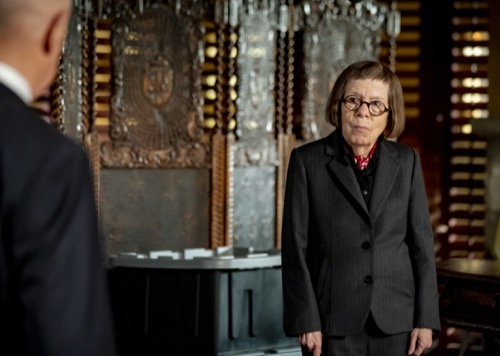 Tonight on CBS NCIS: Los Angeles returns with an all-new Sunday, May 23, 2021, season 12 episode 18 called, “A Tale Of Two Igors” and we have your weekly NCIS: Los Angeles recap below. On tonight’s NCIS Los Angeles season 12 episode 18, as per the CBS synopsis, “Deeks is kidnapped by an associate of Kirkin’s (Ravil Isyanov) in need of his help and NCIS investigates the shooting of a militarized dolphin equipped with a Russian microchip. Also, Beale makes Nell an interesting offer, and Hetty returns.”

In tonight’s NCIS LA episode, Kirkin’s men kidnapped Deeks. Deeks was at the beach. He was surfing and having a great time when Kirkin’s men literally showed up to kidnap him. Deeks didn’t think they would do that on a public beach yet that’s what happened and no one cared. Kirkin’s men announced they were kidnapping him for everyone to care and no one stepped up or even uttered a protest.

No one cared what happened to Deeks. Deeks was kidnapped and his team didn’t know. They were back at the office cataloging Hetty’s office. Hetty’s former position of Operations Manager has been officially given to Nell and now Nell has to decide whether or not she wants it. She wanted to first run it by Hetty. She felt Hetty would contact her if she wanted her to take that job and so she didn’t feel comfortable with accepting the promotion until after she spoke with Hetty.

This did not go over well with Admiral Killbride. He told Nell to either accept the promotion or to resign and so Nell still needed time to think. She complained about it with Callen. Callen offered to speak with Killbride and Nell turned down the offer. She didn’t want Callen handling her battles.

She just wanted to voice her concerns to someone else out loud and so Callen told her the job is hers. She’s been acting Operations Manager for six months. After six months, she’s already the Operations Manager. Everyone feels comfortable with her in that position and no one was expecting Hetty back. Hetty was off doing her thing. She didn’t get any details or forewarning. Hetty was out and Nell was in.

Nell was still contemplating what’s next for herself while Deeks finally found out why he was kidnapped. It turns out Kirkin left his whole operation to Deeks and that includes the fashion thing as well as the gambling thing and the smuggling thing and money laundering thing.

Kirkin had two assistants. One wished to live up to Kirkin’s dream of giving everything to Deeks and the other wished to take over the operations himself. Deeks saw the problem. He contacted Kensi and he informed both her and Nell that he had been left in charge of Kirkin’s criminal enterprise in his will. The two women were doing their best to help while Sam was dealing with an issue. Sam found out that a dolphin that had been chipped by the Russians had been found dead at the beach.

Sam asked Callen if he wanted to check it out, but Callen told Sam to take Roundtree instead. Callen had talked to the admiral in spite of Nell telling him not to and he found out that people in power don’t trust him. They consider him too close to the Russians. The investigation into him by the DOD had brought up a lot of bad stuff and there was still a feeling of unease regardless of him being cleared by said department.

Callen, therefore, didn’t want to touch another Russian case. He passed on it and Sam and Roundtree were investigating the dolphin. They found out the dolphin had been shot. He had been murdered and they were just wondering who would kill a Russian dolphin when they heard from the Coast Guard that a Russian sailor was found adrift.

Roundtree and Sam collected this sailor. They brought him back to the boathouse to be questioned and they were going over him what he was doing out in the ocean when the team found out the second part to Deeks’s news. Deeks said Kirkin had a weapons shipment that Igor One stole. Igor Two told Deeks about it and he wants Deeks to steal back the shipment and to kill Igor One.

Only Deeks is a federal agent. He couldn’t take over a criminal enterprise and he was concerned about the weapons shipment. He and his team were going to find where the weapons were. They also had Fatima looking into Igor one and she had an attitude today. She wouldn’t say why she had an attitude. She refused to talk about it and so no one knew her former coworker died.

Fatima kept that to herself. She also lashed out at people and so she was downright unpleasant during this time. She did however identified the two Igors. Deeks later heard from Igor Two and he informed the team and also Eric (who was back in town to speak with Nell) and Admiral Killbride. Killbride was upset with all these Russian connections. He asked if there was anyone who wasn’t contacted by the Russians and only Eric raised his hand.

Which doesn’t count. Eric no longer works for NCIS and he was only back in town because he received a job offer in Tokyo and he wanted Nell to go with him. She could accept the job offer of being Operations Manager for the NCIS team over there. Nell couldn’t make up her mind and so she still needed time to think. And while she was thinking, Sam found out about the Russian dolphin.

The Russian dolphin was a part of a group of seven. The Russian sailor had trained the dolphins and he couldn’t kill them after the program was terminated. He instead brought the dolphins to the US. Kirkin paid for the Russian military dolphins. It was his secret weapons and that’s what Igor stole. Igor stole the other dolphins. Deeks’s and Sam’s cases were connected. They were both looking for Igor One.

Igor One stopped by the aquarium. He was probably looking for supplies because dolphin chow isn’t sold in stores and thankfully was closed down for renovations and so the team didn’t have to worry about civilians. And they moved to the aquarium where they found both Igors. Both Igors were detained and it turns out they released the dolphins back into the wild as Kirkin wanted all along.

As for the man who shot one of the dolphins, he did it by accident. He meant to shoot the trainer and the boat was bobbing. The shooter was pushed into the sea turtles aquarium. He thought it was sharks and so he was properly punished.

Nell later told Admiral Killbride that she didn’t want Hetty’s job. She realized she’d been working for NCIS for most of her adult life and she couldn’t keep being in charge of the team’s lives. Not when she loves them like family. Nell was going to go with Eric and she shaved his mustache.

Fatima also came clean to Roundtree that her former coworker who died had died years ago. It was the anniversary of her death and she died in a car accident that Fatima had also been in. And after that accident, Fatima gave up acting as well as everything else she deemed replaceable.

And Hetty showed up. She spoke with Nell and she gave Nell her blessing to leave the post in LA. But she also had an important conversation with Admiral Killbride.