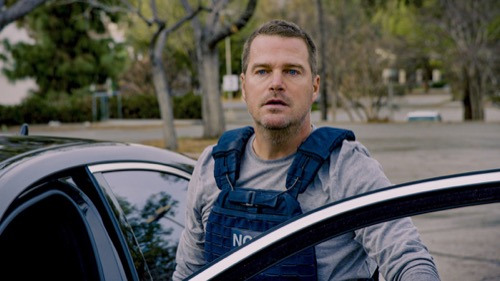 In tonight’s NCIS LA episode, Katya Miranova is back in the picture. The woman was obsessed with Callen’s girlfriend Anna Kolcheck and she was both willing and later did kidnap a friend of Anna’s in the hopes of luring Anna into a trap. Katya knew that Anna and Joelle worked together. They developed a bond and a psycho like Katya may have even been jealous of such a bond. She was obsessed after all and she was prepared to do anything to get her hands on Anna.

Anna has known about Katya for some time. She was warned by Joelle when Katya became active again and Joelle had asked for Anna’s assistance in reaching out to Katya, but Anna turned down the offer. She explained how Katya couldn’t be trusted and that all she would want is revenge for Anna’s undercover opp. The same opp that got Katya burned by the Russians.

This in part explains the obsession. Katya wanted Anna and she kidnapped Joelle because she thought Anna would agree to an exchange. Anna for Joelle. Only Anna knows better than to trust any exchange that Katya set up. Katya would most likely grab Anna and still go through with killing Joelle and so Anna tried to capture Katya. She tried but there was always an issue. Katya seemed to remain one step ahead of her and Anna didn’t know why that was.

Katya didn’t have any backing from Russia. It wasn’t until Anna talked to Callen that they both realized what happened and that’s when they explained for everyone else. The Russians were helping Katya in spite of burning her. The Russians wouldn’t want a former operative of theirs falling into enemy hands.

They would want her out in the world so that they could kill her themselves. Anna’s friend Maksim was working with the Russians and he tried to kill Katya. There was also an issue with why Katya kidnapped Joelle. Joelle was a friend and Anna wouldn’t want her to be hurt but Anna’s father Arkady was a much easier target.

He was also family. NCIS visited Arkady’s home to warn him about the threat and it turned out that they were almost too late in their warning. Katya did go after Arkady. She took out his security system and she killed his men. Arkady was hiding in his panic room when the team found him. They convinced him to leave the room by putting on the phone with his daughter and so Anna had to tell him it was okay before he left.

Arkady is now safe. He’s being protected and Katya couldn’t get to him but her partner might. Katya couldn’t have done so much damage on her own. She had to be working with someone and that someone could be the mole at the DOJ. Agent Carlson works directly at the DOJ. She was a part of the mission with Joelle in bringing Katya in and their plan worked.

They thought they turned Katya. She gave them information that proved viable and so they thought they could trust her. Carlson trusted Katya when Katya told her that the mole they were all looking for Callen. She did this because she wanted them to separate Callen from Anna and she wanted to catch Anna unaware. And so the plan failed because of Joelle.

Joelle didn’t trust Katya. She didn’t believe her when she said that Callen was a mole and so she told the agency that she was going to prove he was innocent. Only she was captured before she could do so. Katya kidnapped Joelle to stop her from talking and the plan didn’t work anyway. Callen was able to skate the charges.

He continues to be free and now he’s now helping Anna in stopping Katya. Katya sent Callen Joelle’s finger. The team ran a DNA test on it and it led to them getting a warning from the CIA to stop testing their data. Which was basically a confirmation. Katya really does have Joelle and she’s torturing her. She cut off her finger. She also sent a cell phone along with the finger to Callen and she later called him.

Katya demanded that the phone be handed to Anna. She was using a device to distort her voice and she claimed she was doing so because Anna stole her voice. She betrayed her and Russia threw her away. Katya was demanding that Anna show herself at a park in an hour. Katya swore she would do the exchange for Joelle and the team was forced into believing her because they had no other choice. They talked to Anna.

She was up for the exchange and so they fit her with everything possible. They placed a tracker, video, and listening devices on her. They then had her meet Katya in the park and Katya did live up to her bargain. She brought Joelle. She fitted Joelle with a bomb and she threatened to blow her up if Anna didn’t get into the van with her.

Anna did so. Joelle was then thrown out of the van and the van took off. The team followed the van. They later pulled it over and they demanded that Katya come out with her hands up, but she instead blew up the van. Callen watched as it exploded. He hadn’t known what happened and so his first reaction was to panic. He believed Katya got her ultimate revenge by killing Anna and herself. The only person she hadn’t killed was the driver.

The driver ran off once Callen identified himself as a federal agent and so Callen questioned him after the van blew up. The driver revealed he was just a delivery man. He had been hired to drive the vehicle and he didn’t know what was going on. The team still took him into custody.

The timer on Joelle’s bomb in the meanwhile had started. Sam stayed with her trying to deactivate it and, when that didn’t work, he had to dislocate her arm to get the bomb off of Joelle. It saved Joelle’s life. The bomb did go off and it hurt no one. There was also more good news. Anna was still alive. She hadn’t been killed in the other bombing. She had been taken by Katya and the two can be anywhere right now and so that’s where the good news ends.

Katya was very smart in the way she managed to escape. The team hadn’t been able to use their usual methods in finding her or Anna and so it looks like the two were gone. They were off someplace where the team couldn’t find them. The team didn’t even have leads on where they could be and that meant, for now, the search needed to be called off.

And Callen later learned that Joelle’s leg wound was so bad that they had to cut her leg off. She had been shot in her leg and the doctors tried to save it by putting her on medication to keep sepsis away, but it hadn’t been enough and so they had to remove it, and now Joelle has lost below her knee.