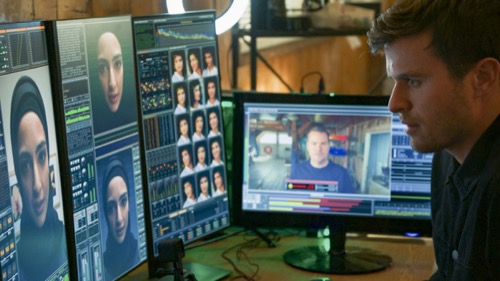 Tonight on CBS NCIS: Los Angeles returns with an all-new Sunday, May 2, 2021, season 12 episode 15 called, “Imposter Syndrome” and we have your weekly NCIS: Los Angeles recap below. On tonight’s NCIS Los Angeles season 12 episode 15, as per the CBS synopsis, “NCIS obtains a hard drive containing a realistic deep fake video of a deceased terrorist and must retrieve the dangerous technology behind it; communications are hijacked during their mission.”

In tonight’s episode of NCIS Los Angeles, the team recently arrested Derek Rashed. It was a group effort. The team worked great together and afterward Fatima chose to hit the gym. She likes to hit the gym on a Friday night. She said she likes having the whole place to herself and that’s why she goes when it’s normally empty, but tonight she ran into someone. This someone likes listening to his music on the sound system.

He even likes singing to it out loud and so Fatima wasn’t getting her normally quiet gym. She asked the guy to turn the music down. She also asked him to stop singing once he started to do that without the music and that leads to a challenge because the guy asked her what type of music does she listen to? Fatima loves Arabic techno. It was the techno part that had the guy calling her taste into question and so Fatima agreed to box with her new friend.

The winner gets to choose the music. Fatima went boxing and she later won. She got to choose her techno music. She also made a new friend. She agreed to meet with her new friend next Friday as well and the two agreed to have dinner as well. Fatima had believed her new friend was a great guy, but it turns out he was monitoring her. He reported to someone the second her back was turned and he told whoever he works for that it was “done”.

Which could mean anything. Fatima and the guy just boxed and he didn’t ask her any questions about herself or her team and so it seems odd that he managed to get information on her. It’s just he wasn’t as innocent as Fatima would like to believe. Fatima was unaware as the rest of her team were finishing up the case with Rashed.

Rashed was found with DVDS on him at the time of his arrest. The DVDs were Al-Qaeda propaganda films and one video had the known terrorist Umar Hamid on it. There was simply a few problems with this video. It was current and that too didn’t make sense because Hamid allegedly died a while back. It was a bit fuzzy at the time, but everyone thought he was dead, and yet there he was alive. He was filmed with a recent newspaper and a car that was just released this year.

This means the video couldn’t be fake. It was real and Hamid was alive. The team wanted more information on it and so they turned to the only asset they had. They turned to Rashed. They asked him why an American-born citizen would be helping terrorists. And he said he didn’t know what he was delivering.

Rashed was merely the middleman. He was hired to deliver something and he never questioned what it was or who he was delivering it to. Rashed was almost blasé about it. Like he wasn’t upset in the slightest that he got involved in terrorism. The team had to instill fear by saying what would happen if the buyer blames him and the team was going to make sure he was blamed. They would put the word out there.

The only way to stop them was to work with them and that’s how they forced Rashed into working with them. Rashed didn’t want to be an enemy of Al-Qaeda without American protection. He agreed to tell the team everything he knew and they meanwhile were still working on the video.

Nell reached out to her sources. She learned that Hamid had truly been killed by a drone attack years ago and that the video was the best deep fake video she has ever seen. She ran several tests on it. Everything came back listing the video as real and that was scary. That meant the terrorism had access to technology outside of her capacity. Nell was down one person because Fatima’s mother suddenly suffered an accident. She fell down the stairs and possibly broke her hip.

Her daughter has chosen to be with her while she was at the hospital, but Nell understood. She had Callen stay with Rashed and she ordered Sam to go with Kensi and Deeks to check out a building. All three agents were at the building when someone began firing at them and it turned into a shootout.

The suspects appeared to be Middle Eastern. Kensi and Deeks caught the man that was shooting at them, but they were getting different reports from different people, and all it was a fake. Nell had lost contact with everyone. She had been approached by someone on the listening devices and this person was using the team’s voices as well as her own to send her a message. They can be anyone at any time. They could risk her agents.

They could even kill them and there’s nothing Nell could do about it. The terrorist wanted something from her. They wanted the hard drive with the deep fake video about Hamid and Nell couldn’t hand it over. She couldn’t risk handing over something she doesn’t know the risks about.

Nell instead sent a message to her team. She told them not to use their comms or trust any voice on it even if it sounded like it came from someone they trust. Nell couldn’t risk handing over the DVDs. They were apparently proof of concept. Someone was creating deep fakes of Hamid because that way they could pretend he was still alive and it would be digital immortality. The next Bin Laden, with this concept, would be impossible to kill.

His message and his imagery would continue to live on and that’s what guys like Rashed were counting on. He wasn’t just some middleman. He was an up-and-coming terrorist himself. He wants the “message” to live on in spite of the countless billions that Americans will spend to just kill just one terrorist. And he believed the message so deeply that nothing Callen said could dissuade him.

Nell reached out to her team using cell phones now that she couldn’t use comms. Only that too proved to be a problem because she and the team thought they were speaking with Fatima because they saw footage of her talking to them in real-time, but Fatima’s image had been stolen. Her new “friend: had stolen her image during the boxing match and he was able to create a deep fake of it. He asked Callen to move Rashed to a separate location.

He also asked Roundtree to deliver something to him. The guys did it because they thought Fatima was telling them to and all along it was part of their plan. They guys knew they were dealing with a fake Fatima. Callen brought back up when he transferred Rashed to a new location. And so Rashed didn’t escape custody.

Roundtree and Nell also pinged their deep faker’s location when they supposedly delivered information to him. So, Noel was screwed. The real Fatima and Sam were later able to arrest their culprit and someone blew up his offices minutes later. And so, once he saw that his partners were eventually going to kill him anyway, Noel offered up information.

But the potential of the deep fake was still out there and it remains a threat.

Not that the team was going to let that affect them as they all moved on with their lives. In Kensi and Deek’s case, they painted the extra bedroom in the hopes of one day having a child.