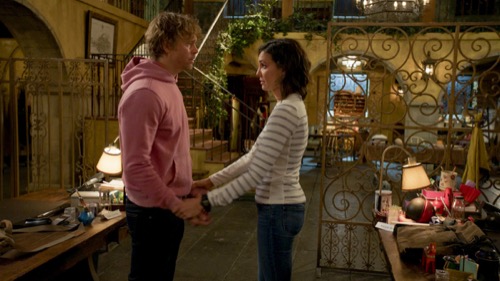 Tonight on CBS NCIS: Los Angeles returns with an all-new Sunday, May 16, 2021, season 12 episode 17 called, “Through the Looking Glass” and we have your weekly NCIS: Los Angeles recap below. On tonight’s NCIS Los Angeles season 12 episode 16, as per the CBS synopsis, “When a naval intelligence officer is tortured and murdered, NCIS discovers that CIA operatives are being killed in the same way; Kensi receives a threatening postcard from David Kessler, the sociopath who is obsessed with her.”

In tonight’s NCIS: Los Angeles episode, A woman was found dead in her hotel room. The woman was later identified as Lt. Commander Susan Sorenson of the Office of Naval Intelligence and she was brutally murdered. The team was asked to investigate her death, but before they did, Fatima informed the team that David Kessler was back in California. He was pardoned by the former president and so he was a free man.

He could do what he likes. He can go where he likes. His sending a postcard to Kensi with a veiled threat wasn’t enough to arrest him and so the team had to bench all discussions of him as they continue to investigate what happened to Sorenson. Sorenson’s death has captured a lot of attention. The SECNAV has brought in the CIA and so Joelle was assigned this case. She was the liaison. She was also running point on the case and that meant she was in charge.

Joelle requested the team specifically. She needed someone who could investigate to her liking and she thought of the team because they’ve worked together in the past. Joelle was especially concerned about Sorenson’s method of death. She was tortured before she was killed and everyone feared she may have given up pivotal information.

Sorenson’s fingers were burned. She couldn’t and neither could anyone else withstand such torture and so Sam and Callen went poking around. They found out Sorenson was gagged before she was murdered. There also was no footage of the hotel corridors because they had been erased and so whoever killed her was a professional. They thought they had covered every angle and it turns out they were wrong. The bartender saw the guy.

The bartender also claims he remembers what the guy looks like. He was working with a sketch artist drawing up a description while Joelle and the guys found out that someone used the same MO to murder CIA Officer John Bradbury. He was even tortured the same. Someone was out there killing highly trained officers and it was up to the team to find this person or persons. Kensi and Deeks questioned Sorenson’s boss Officer Behr.

He was asked if Sorenson was seeing anyone and he said that she was. It started about three months ago. Sorenson told him that the guy was presenting as someone who could be CIA. The guy never claimed he was CIA but Sorenson’s spidey senses were telling her he was and she was out of town at the same time as Bradbury.

The team suspected the two might have worked together on the same task force. Sorenson worked in cyber-attacks and countermeasures and so she could have worked with someone in the CIA. Joelle was looking into it. Admiral Killbride was also looking into it and he found out there was a joint task force. There were also two other people working with the two murdered individuals.

Their names were former CIA Officers Paul Winters and Steven Erdnase. The two split up to track down both men and Sam and Roundtree found one man dead but the body and all the evidence when someone set off a remotely detonated bomb. The killer must have been watching the scene in order to detonate the bomb when they did.

The body they found was Winters. Whoever killed him had been hoping to murder either NCIS or CIA as well with that bomb and so Joelle agreed to stop sending reports to her bosses. Just in case there was a leak somewhere in the chain. The team also had to find Erdnase in case he was already targeting or if the bad guys were having the same problems as the team in locating him. He wasn’t at his house.

They couldn’t find him at a hotel and it was bugging everyone that each member of a task force had been hunted down. It made them wondered what really happened with the task force. They had been told it was cybersecurity and the truth proved to be something completely different.

The task force had hunted down a man named Aleksi Zhirkov. They kidnapped him and brought him to Poland where they tortured him for information before murdering him. Only they didn’t know that Zhirkov was the illegitimate son of Yuri Kirilenko. Kirilenko saw through their lies that his son wanted to defect from Russia and he realized what really happened to his son. His son was murdered by Americans in a gruesome fashion.

It was so gruesomeness that Kirilenko was now tracking down each member of the team to murder them the same way they killed his son and the only one left was Erdnase. Erdnase bought up a bunch of land with an LLC. He didn’t build a structure there. He has a mobile home instead. The team was asked to travel to the mobile home and to save the last member of the task force.

Callen and Joelle made it to Erdnase. They had him surrounded by their own people and so they questioned him about Zhirkov. Erdnase first told them it needed to know. It wasn’t until he was pushed that Erdnase revealed Zhirkov was alive. His death was faked so that he could escape from under his father’s thumb in Russia and the task force did such a swell job that they were being hunted for something they didn’t do. Or at least that’s what the team thought.

They thought this right up until Officer Behr came and he wasn’t alone. He traveled with the bartender who turned out to be CIA and they were traveling with both Sorenson, Bradbury, and even Winters. The task force knew they were being targeted for murder and so they all faked their deaths and had NCIS investigate their deaths just to throw off suspicion.

And so no one was hurt over their mission with Zhirkov. Everyone was fine and the task force was running everything. NCIS being there was just dressing. The team left the Intelligence officers to themselves and Kensi and Deeks spoke about their situation. They were trying for a baby and borderline stuff wasn’t helping. And so Kensi suggested adoption because they were plenty of kids out there who need parents.

And later Callen found out Joelle knew the truth about the task force the whole time but she kept it from him as she helped one of her own reached the high echelons of Russian Intelligence.