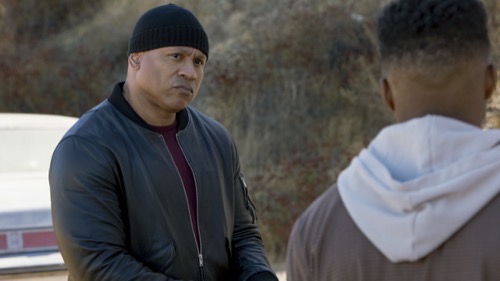 Also, team members are interviewed by FLETC to see if Deeks would make a good NCIS agent, and Callen tries to have an important talk with Arkady.”

A woman witnessed a shooting. She was just leaving work one night when she came out and heard gunshots. This woman chose to hide, which was very wise of her. Her hiding is what saved her life. She ran behind a car as a security guard was chased and killed by a man wearing a black ball cap. The killer didn’t see the witness else he might have killed her as well and he ran off into a van that waiting for him along with an accomplice that was driving. The two fled the scene, but the woman was there and she called the authorities. She had been a witness to the crime. She therefore knows the two men that were responsible could have gotten away without having to kill the security guard and that their sole focus seemed to be the security guard and not what the man was protecting.

This crime didn’t seem federal or federally connected at first. It was passed to LAPD and the team in the meanwhile were all focusing on Deeks. Deeks received special permission to enter the program to become a federal agent. He has to become one if he wants to stay on the team because LAPD ended all liaison positions and now he has to go through a process like everyone else. He applied for the program. He was being considered for it in spite of his age because he had friends who pulled strings for him and so now he just has to pass the interview. He has to be interviewed. Those with whom worked with also had to be interviewed. There was still some questions about his time in the LAPD because back then he had been watched closely by Internal Affairs.

Eric was one of the first to be interviewed. He was back now after having made billions through government contracts and he has a new lease on life. He was now more new age. He wanted to use his money to combat homelessness and he was going to start by building low-income housing. Eric also liked to talk about his zen disposition and what teas he’s been drinking. He sorta annoyed the interviewer. Agent Martinez couldn’t wait to be done with him and then it was onto Sam. It was right around his interview that the team received their notification. LAPD was handing over the case of the murdered security guard because he was a Navy reservist and so that makes the team’s problem.

The team sent Callen out into the field. He questioned the witness and the only thing she could tell him about the getaway vehicle is that it had a special license plate that said “Don’t Take It Personal”. Other than that, she was pretty useless with information. She didn’t see the killer’s face and she admitted that it all happened very fast. The witness did tell Callen he could try the fast food truck behind the building. The truck tends to stay there overnight and luckily they have security cameras. The cameras showed that Bellamy was targeted. He hold an unique position in the reservist because he had access to other servicemen and women’s files and so the team came to question if maybe that’s why the killer targeted Bellamy.

Personnelmen First Class Joe Bellamy was a security guard at a library. The library didn’t hold anything special as far as the team knew and so killing Bellamy to gain access to the library seemed flawed but killing him to gain access to files on the men and women in the Navy Reserve truly did sound like something worth killing for. The team chose to go with that last theory. They looked into Bellamy’s life and they found out he had a gambling problem. He was heavily in debt. He also offered to sell names from the Navy Reserve to interested parties for a fee. Bellamy was taking dangerous risks and he wasn’t being careful. He lived in an RV. The RV didn’t have security nor was it locked and a file was literally hiding behind one of the wheels.

The file was on a woman by the name of Natalie Chan. She was researching something for the Department of Defense and it seems Bellamy was looking into her because he wanted to sell information she had. It could even be the reason why he was killed. The team didn’t know what this information was and so they went to Dr. Chan’s home hoping she might provide the answers and, while they were there, they ran into men who appeared to be breaking in. Sam and Rountree were able to take both men down. They checked them for weapons and they found a pair of house keys on one of them. Which would explain how they got in. It also solved the question of where was the missing doctor. She wasn’t at home and no one has seen her in a day. Chan was clearly kidnapped. The team had her kidnappers and unfortunately the men weren’t talking.

The elusive information was also still a mystery. The team tried speaking to Chan’s coworkers and all they got was that she was working on emerging therapy for soldiers with PTSD. She had developed a program designed for spotting. It could also work in spotting human behavior and it seems that someone thinks it can be turned into a weapon. The men that broke into her home were Chinese nationals. Jimmy Fang and David Lao came into the country not long after Bellamy made his posts willing to sell information and so they weren’t acting alone. There was a group of them. They were all acting under orders from the Chinese government. The two men also couldn’t go back without the information because it might mean death for them and so the team became their best bet at surviving this.

The team soon found out that Chan was being moved. It seems the plan was to fly her to China if they couldn’t get their hands on her research and so the team had to stop this before she was taken off of U.S. soil. The team was given location to an airfield. They moved on the building and were able to disarm the guards as well as rescue the doctor.

Deeks also made it through his interview in one piece and he thankfully made a good impression on his interviewer.

Callen also got into contact with Arkady because he wanted the older man’s blessing for proposing to Anna, but at the last minute he chose to change his mind because he got cold feet.