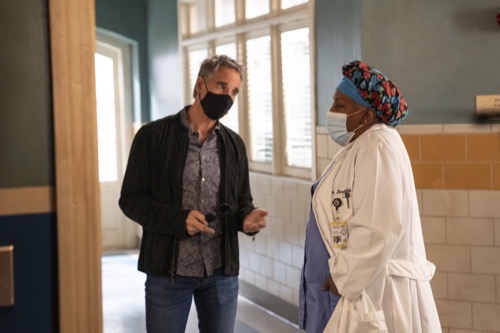 The Mayor created a commission. The commission was brought together to handle the hot button issues that needed to be fixed within the city and Pride was asked to lead it. Pride was friends with Mayor Taylor. He also believed in her commission because he too wanted to change the city he loved for the better and so he was surprised when someone dropped out. That someone was a liberal.

She was loud and opinionated. She also hadn’t wanted to work with the chief of police because she didn’t trust him and it had taken Pride speaking to the Chief to get him back on board. Pride felt the least he could to was to speak to Allie as well. He asked her to come down to the bar because he wanted to know why she quit the commission and, whether it was the food or a listening ear, she ended up admitting that someone was blackmailing her.

Allie told Pride that someone texted her anonymously that they have naked photos of her. They even sent her a photo to prove that they have it and Allie couldn’t risk those photos getting out. She took them when she was in a relationship with the very married Senator Jason Lee. He was a Republican that was big on family values. He and Allie got together before he went into politics and he hadn’t told her he was married. She dumped him once she did find out. She also tried to reach him once she realized someone had these photos of her and the only they could have gotten them was from Lee. Lee unfortunately wasn’t answering any of Allie’s messages. He was ghosting her and she was scared. She was blackmailed into quitting the commission.

Allie told Pride everything. She told him how she couldn’t afford those photos getting out and he assured her that he would help her. He didn’t want her living with extortion for the rest of her life. He said he would find the person that was blackmailing her and that he would handle it. Only there was really only so much he could do with everything that’s on his plate. Pride’s team was still looking for an illegal soviet era submarine that was built by smugglers and which was recently used. It was used to fire on a mere fishing boat. No one knows why they fired on a fishing boat because its not like anyone on it was famous or powerful and so Carter suggested maybe they fired on the boat to prove what its capable of.

Pride’s team was busy chasing down leads. They investigated the man they killed at the boat yard and they found out his name was Kristoff Vint. Vint had a cell phone. His employer Nicholas Antonich reached out to him. He asked to meet and the team managed to get enough information from him to figure out the meeting place. They went to the docks.

The team agreed to help protect him. They also continued their search of the submarine and were in fact doing so when Allie came out with a press conference. Pride had helped her to get into contact with the senator. The senator had no idea how those photos got out and he believed he was hacked. He also wanted Allie to quit the commission because he didn’t want this jeopardizing his political career. Lee told her to quit and she instead chose to admit to everything. She owned up the affair on live television. She said she was being blackmailed and Pride was proud of her. He wished she would have trusted him to help her. But he understood that she had to this her own way. Allie coming out like she had risked the commission and the remaining members of the commission all thought different things.

Some supported her while others thought she should quit in order not to drag the commission into the scandal. Pride informed everyone that they were going to be supporting her and getting back to business very soon. He also checked in with his team. They found the torpedo used on the fishing boat. It wasn’t activated and if anything it was purposely sabotaged.

The team still didn’t know why they fired on the fishing boat or were willing to alert the Coast Guard to what they were up to. They were looking for its builder. They were looking for Jorge Perez because he seemingly disappeared while they were watching and he was their best at finding the submarine. Their best bet at finding him was using their businessman. Nico was the only one who could contact them without setting up any alarms.

The team used their guy. They had Nico contact Perez and lure Perez to a location. They thankfully had Gregorio as backup because she saved the day. Gregorio was in a sniper position and she shot Perez before he could kill their contact. She shot him in the shoulder. Perez freaked out from all the blood and he revealed where the submarine was located.

The Navy later found it. They took it into their custody and they granted Nico a chance to flip on everyone by handing him to Interpol. They didn’t really have information to use against him anyways. He went to Interpol and he must have had connection with them because he managed to get them let him go to a nonextradition country. Nico later texted Carter a photo of him at the beach just to rub into the younger man’s face.

Also, the commission was back at it when they found out the liberal pastor got drunk and told a man who owns private prisons about ending cash bail. It was the second guy who tried to blackmail Allie. Only she came out with her truth. She ended the blackmail and she forgave her pastor friend. The commission was up and running again. The same people were fighting over the same issues. And Pride was once again stuck in the middle, but he was thinking about asking Dr. Wade to join the commission because he thinks she would help bring everyone together.