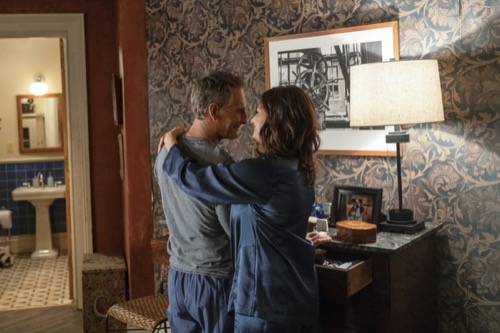 In tonight’s NCIS New Orleans a man was killed in the middle of a paintball battle. The paint guns weren’t harmful or even real for that matter and so they didn’t do the damage. The damage must have been done by a real gun. Someone murdered Naval Petty Officer Langford. The shooter had to be trained because the team determined that their shooter fired his or her weapon miles away off of a bridge and that means what happened to Langford wasn’t an accident.

It was purposeful. He was purposefully targeted and it was to the team to figure if it was personal or professional. The team looked into Langford’s life. They investigated his every movement and they realized that his death couldn’t have been personal because the guy was likable. He was president of his paintball league. He calls his grandmother every Sunday and he tallies his personal bank account at the end of each day.

Langford was not just likable. He was boring. He ran his life based on routine and so there’s no way a guy like that could have offended someone so strongly that they would want to murder him. The team found the bullet that killed Langford. They tested it and it matched the bullet from three other murders. The team had a spree killer on their hands. Their killer has been traveling along the I-10 in a green car and he’s been picking off his victims from that highway. The killer even missed one time. He or she accidentally left someone alive and so the team spoke to that person. They spoke to Ted Jacobi. Jacobi had been changing the tire off the side of the road and the next thing he knew he had been shot in his arm.

Jacobi, it seems had turned at the last minute. If he hadn’t done that, the bullet would have hit a major artery and he would have died instantly. Jacobi was lucky. He was even told he was lucky at the hospital and unfortunately he doesn’t feel that way because he’s dealing with PTSD. Jacobi was afraid of getting back into his car. He couldn’t drive or be outside for long before he starts to panic.

The police investigated what happened to Jacobi. They didn’t look as far as five hundred yards away because they hadn’t known the shooter was a trained sniper and so Sebastian went looking for their shooter. He checked surveillance cameras. He found the blue SUV that he was looking for. He even got the license plate and Carter put a BOLO out. And that BOLO helped them to find the car and a shooter.

The team later found the car at a camping site. They tried to clear the area without alerting their suspect and they weren’t as proficient as they could have been. The shooter spotted them. He started shooting at them and tried to run away, but they stopped him and they arrested him. The shooter was identified as Samuel Wilkes. He was recently laid off and, for some reason, he decided to make that everyone else’s problem.

Wilkes killed those people because he could. He didn’t care that they were people or that they had families. He just killed them for the thrill. He said the death was the great equalizer and that he was its humble messenger. Wilks boasted of the murders. It went against Gregorio’s profile and she had other concerns as well.

Gregorio profiled that their shooter was military trained. Wilkes wasn’t trained. He claimed he was self-taught and that he was that good because he went to the shooting range as much as he could after work. Only he didn’t boast about murdering those people. He didn’t give up any details they didn’t already know and so Gregorio questioned his story. She asked Pride for the chance to interrogate him.

She wanted to prove that Wilkes couldn’t have done it and instead, he confirmed that he had tried to kill Jacobi. He remembers that failure. He knows that Jacobi only got away because he turned at the last minute and so at first Gregorio had thought she was wrong about him. She thought Wilkes did do the crimes.

It didn’t dawn on her until much later on that Wilkes has a partner. The partner is the shooter and Wilkes is just the driver. He tried to steal some glory for himself by confessing to the crimes, but it was just boasting and he was shot as he was being transferred to prison. He was shot and killed by his partner.

The team realized very fast what was happening. They also realized the two men must have traveled in separate cars and so it’s a good thing Sebastian took photos of every license plate at the camping site. He was able to find two cars from Texas. Wilkes was from Texas and it soon became clear that his partner was Tanner Chambers. Tanner was an angry loner. His father trained him to hunt as a kid and he often had to move. He lived in each city where he shot someone. He blamed the city for what happened to him.

Tanner didn’t have friends because they moved so much. He more or less depended on his sister and the only reason the family had to move is that his father died. His father got sick, he lost his job, and then he died. Tanner was someone who thought the world was out to get him. He blamed the liberal media, the government, and everyone else for his problems. Problems like his father dying.

He snapped after he was let go from his job. He knew Wilkes through his work and the two fell into friendship. Tanner liked that Wilkes was a follower. Wilkes liked that Tanner was capable of murder. They became friends and then they started to kill together. The team later found Tanner in Mobile, Alabama. It’s where his family was originally from. It’s also where his dad got sick and so Tanner hated Mobile.

He went to the rooftop of the company that used to employ his father. He was going to kill someone else and the only way to stop him was to talk to him about his dad. Gregorio got into his head. She told him that his father wouldn’t have wanted this and what she said must have worked because Tanner turned his rifle onto himself. He killed himself. He felt so ashamed for possibly taking other parents away from their children that he killed himself. The case was closed and Pride was able to return home.

Pride proposed to his girlfriend Rita. She had received a job offer in Kansas City and she turned it down because she wanted to be with him and it turns out she found the ring. She also put it back in the wrong place. So, she had to come clean when Pride went looking for the ring and couldn’t find it but he still proposed and she said yes.