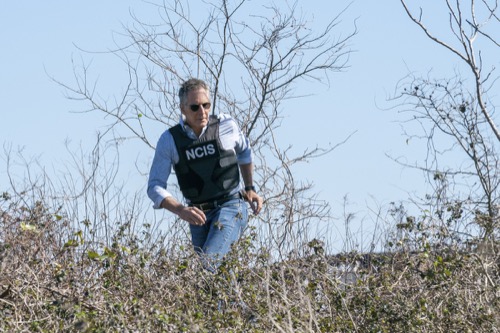 In tonight’s NCIS: Nola episode, several prisoners escaped during a bus transfer. The prisoners received aid from friends in stopping the bus on the road and these friends are dealt with by the guards. They weren’t killed however they were tied up and left on the side of the road with no protection. It was a miracle they didn’t die from other means.

The guards eventually sent for help and NOPD was notified. NCIS was also notified because one of the prisoners was connected to an old case of theirs. Sebastian worked undercover with the Real American Corps and he was able to gather enough information on the organization to shut it down. Some members were killed. Some were arrested and the RAC was done.

There was no one left to reinvigorate the old white supremacist group. Therefore, it was shocking that someone would break Abel Brooks out. His friends were tied to the group and there weren’t enough of them alive or free to help Abel escape. The other five prisoners escaped because the option was there.

Four of the six were due to be released soon and of the two remaining it was just Abel that had grudges. Abel had apparently told everyone how he was going to get revenge on the man who snitched on his crew. This was confirmed by the other prisoners when NOPD found them and arrested them. They said that the crew that attacked the guards was there for Abel. Abel also drove back to New Orleans while the rest of them were trying to flee the city.

There could only be one reason he went back to New Orleans. It was revenge. To be specific, revenge against Sebastian. Sebastian was the guy that destroyed Abel’s whole group and so if the RAC was reorganizing then it would be Sebastian they would want to kill. He was the one that took down their dead leader.

Sebastian removed Jim Keene from the picture and they could still be angry about that. Sebastian was such a huge target for them that Pride took him out of the field. He placed Sebastian in protective custody and he had Carter protecting him. Carter didn’t really like the idea. He was forced into it and yet it gave him time to truly get to know Sebastian. The two talked at the apartment they were hiding in.

Sebastian asked Carter about his pattern. Carter was known to only work at one location for a year to eighteen months and so Sebastian always thought Carter wasn’t getting to know him because he’ll soon leave. It was until Sebastian saw Carter with Khoury that he thought Carter could be different.

Carter and Khoury have been hanging out a lot and Sebastian thought they were getting to be great friends. Gregorio however profiled them as flirting. She thought the two had the hots for each other and were flirting because they were testing the waters. Gregorio also told Sebastian that he would make a horrible profiler because he didn’t see the flirting while she did. And now Sebastian was finally getting to know Carter.

Sebastian and Carter talked. Sebastian told Carter that Gregorio had created a profile on him and he even revealed details of the profile. He apparently said too much because Carter later got upset. He started eating in the bathroom and Carter was still in there as Sebastian was getting an update from the rest of the team. Sebastian talked directly to Gregorio. She told him what they found and she mentioned everything.

She told him that Abel and his friends took an elderly couple hostage as they used their house. Abel and his friends also mentioned finding a stash at the old pit. This resonated with Sebastian because he remembers hearing about an old pit in his discussions with the RAC. He and Carter, who eventually left the bathroom, were able to use the information they were given to determine where this pit was located.

They handed over directions to their team. Pride and the others went to the site and they found Abel. He had been killed by his friends and his body had been dumped. It seems Abel was only freed because the people he was working with had wanted access to the stash. Abel was working with two people who freed the prisoners.

The identity of those people is still unknown. One of them could be a woman and that woman could have been the one who pretended to be a member of DHS to get the dispatcher to reroute the bus. The team was able to identify the fake DHS agent. She was Lucy Jacobson and she was Abel’s on and off girlfriend since high school. There’s no way she would kill Abel just for the stash. She wouldn’t even be in on it. It had to be the other people Abel was working with and another one was later identified.

The man who killed Abel left behind his DNA. It was Roland McCann and he was Keene’s half-brother. He was also a member of a Neo-nazi prison group. He has the same ideologies as his brother and he hasn’t checked in with his parole officer in a while. The team figured Roland must have killed Abel for the money, but they later found the money with Lucy after she had been arrested trying to flee the city. She had been given all the money after Roland killed Abel and she said that Roland only did that because he blamed Abel for his brother’s death. Roland as it turns out had wanted revenge on everyone connected to his brother’s death. He killed Abel and he’s currently looking for Sebastian.

Lucy hadn’t known that Roland was going to kill Abel. She had been surprised by it and she fled afterward because she had been scared of Roland. Lucy had gotten arrested. She was out of the picture and it was now just Roland they needed to find. They went looking for him. Only he found them first.

Roland found Gregorio and he forced her off the road because he wanted to use her to find Sebastian, but Gregorio saw that he was following her and she alerted both Sebastian and Carter. The two showed up just when Gregorio needed them most. And they killed Roland.

Roland’s reign of terror was over. The team later went to the bar to celebrate and neither Carter nor Khoury showed up. The two decided to get a drink on their own.