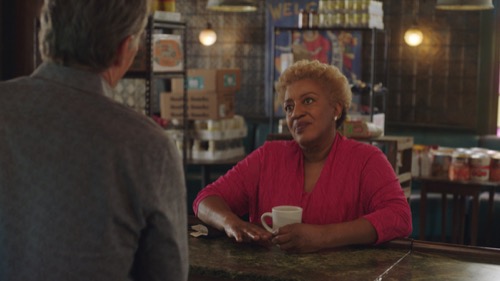 In tonight’s NCIS Nola episode, Pride reached out to Sasha. He confirmed Connor was his son through a DNA test and he now would like to be a part of Connor’s life. But Sasha doesn’t want his involvement. She said she’s the one who scrapped and clawed for Connor and all Pride did was send her to jail for five years. Sasha is still resentful of the fact Pride went back to his wife.

She has never forgiven him for doing so and that’s the real reason why she doesn’t want him around their son. Sasha is doing her best to push him away. She didn’t even see how much Connor needs a father. Pride understood he was needed and he told Sasha that he was going to be there for their son whether she likes it or not. Pride also realized he couldn’t be a part of the investigation against her. He later informed his team why he was stepping away and that the investigation has to continue without him.

Pride next had to inform his daughter, Laurel. Laurel didn’t remember much from that time and so she was disappointed in her father. She also would like to meet Connor eventually. Not now. She was still processing and so maybe when the dust settles. Pride felt bad after his conversation with Laurel.

He felt he should have done better and nothing Rita said could help. Rita also offered to be there when he spoke with his mother but Pride said his last few visits with his mother haven’t been great and so he told Rita he prefers to go alone. Rita was concerned for Pride. She called Dr. Wade and Wade later spoke with Pride. The two were old friends. They go a long way back. Pride was more at ease talking to Wade about his problems than he was talking to Rita.

Pride had to step away from their conversation when he heard Sasha was leaving town with their son. He went running to Sasha’s and he begged her not to leave. She told him she had to because she said there was a target on her back. She wasn’t afraid of the Watkins and so the target she was talking about was from Pride. She knows Pride opened an investigation into her.

She doesn’t know he handed that investigation over to his team and that the FBI was called in. The FBI showed up to detain Sasha around the same time that Connor came outside to see what was going on. From Connor’s standpoint, his father showed up with the FBI and he was going to take his mother away again.

Only Pride didn’t know about the FBI. He distanced himself from the investigation and his team was now calling the shots. They were still looking into Sasha and they were also working on a side case. The team was looking for a missing Navy dog. The dog was named Charlie Strand. She was a Belgian Malinois and she received a purple heart for saving her eventual owner.

Now, the two were both expected to deploy together. Her owner was assigned her care because he’s the only one who can talk with her. She only understands Serbian and so she won’t understand what anyone else might tell her out in the world. The team agreed to go looking for the dog. It’s a first for them and so they didn’t know where to start. They just hit the street and started asking around.

The team was doing that while Sasha was answering questions from the FBI. She denied any connection to the recent bombings and to the bomb that killed Elias Watkins. Sasha claims Pride opened an investigation into her as a part of a custodial dispute over their son. She also said she knew who the bomber was and that she was willing to cooperate. Sasha gave the feds a name.

Her son meanwhile was stuck at Pride’s place with Rita and Jimmy and Jimmy wanted to tell the young man Pride’s version of events. The other adults in the room wanted to stop him, but Jimmy told Connor he should read up on what Sasha was accused of and he should find the truth for himself. Conor got a call from his mom. She told him she’s been released and he went downstairs to meet her.

Connor also asked if there’s anything wrong because he saw how worried his mother looked. It turns out Sasha’s bank accounts have been frozen thanks to the feds and so she’s having a hard time moving her money. Sasha Connor not to worry about it. She told him to instead focus on where they’re moving to and things they’ll need. With her money tied up, Sasha won’t be able to leave town as fast as she likes, and that opened up a great opportunity for Pride. Pride’s mother is going through an upswing. It’s called terminal lucidity. He has warned this change in her behavior could be the first sign that the end is near and so Pride wants to do everything with his mother while he can. He even wants to introduce Connor to her. And he wants to bring Rita to see his mother.

Pride’s mother mentioned she wanted to hand some of her jewelry over to Rita. So, now was the time. Pride was doing that while the team was hunting down their dognapper. The person who kidnapped Charlie is Seth McLaughlin and he’s been learning Serbian. It seems the reason Seth stole the dog is that he wanted to use the dog to sniffing hidden drugs and he’ll most likely kill Charlie when he’s done.

The team has to find him before he finds the drugs. They tracked him down to a closed carnival park. He was down in the tunnels and Gregorio went down there with the dog’s owner. And working with the dog, the team was able to bring down Seth and arrest him for dognapping.

The rest of the team contacted Beverly Watkins. They asked her who would Sasha chose to name as a scapegoat and Beverly named Joe Barns. He was recently fired after the Watkins family found out he was stealing from them, but they taught him a “lesson” and he would be the perfect scapegoat. Khoury and Sebastian later tracked down Joe.

They had to talk him down from shooting them because Sasha told him that some agents were coming to kill him and Joe was too dumb to realize it was a trap. The team made him see sense. They also made him realize that Sasha is the enemy. Sasha was trying to pin the crime on someone else and the team was stopping her. Pride wasn’t a part of the investigation. He recused himself and he spoke to Rita.

Pride and Rita agreed to have a wedding so that his mother could be there. They also want Connor to be there and so Pride visited Sasha’s home. He told her that the case against her wasn’t going away. He also said that if she gets sent to prison again and doesn’t tell Connor the truth – he’ll push away everyone who cares about him. Like Pride. Pride can be there for his son but Sasha has to tell the truth first and so that’s what she chose to do. She finally started telling the truth.