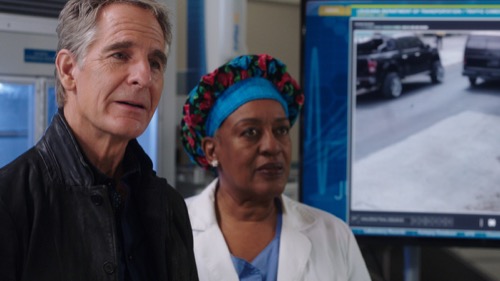 In tonight’s NCIS New Orleans episode, Sasha Brossard is a criminal. She lived a criminal lifestyle and she collected enemies. She especially upset everyone with giving up information on them to the FBI in exchange for Connor to be released. Someone tried to kidnap her son. His life was in danger now and so was hers. Sasha changed her mind about witness protection.

She wants to enter the program and she wants to take Connor. It will be safer for Connor this way. Sasha and Pride agreed about this and they told Connor together. They told him he was going into the Witness Protection Program. They told him the sooner the better and he said he wasn’t leaving before the wedding. Connor had promised his Uncle Jimmy that he would play at the wedding. He wanted to keep that promise and so Pride talked Sasha into letting Connor stay until the wedding.

Pride told Sasha that he wanted to spend a few more minutes with his son. They missed out on years and he wanted Connor to be embraced by his family before he left. Pride and his team were also looking into who tried to kidnap Connor. The team created an enemies list based on the information Rita gave them about Sasha’s treasure trove and they were also following up leads on the dark web. There was a lot of chatter about Sasha. People wanted her dead for what she did and so there was a lot to go through. Only the team later got a lead. Sebastian found a rag the kidnappers threw out the window and it had blood on it. Sebastian ran a DNA test. He found out who the guy was and the team later tracked him down.

Pride and Sebastian went after their guy. They chased him through Jackson Square and he was stopped by a man who drives a horse-drawn buggy. Their driver stopped their suspect with a whip. The whip hit the suspect in the face and that stopped him long enough for Sebastian to arrest him. Sebastian and Gregorio later questioned the suspect.

They tried to get him to flip on whoever hired him and the guy refused to talk, but the team found his friends. Stuart Hendricks refused to flip because he was working with Ford Kessler and Jay Duke. The two have been in and out of prison since they were kids. They were bad news. They met Stuart in prison for his first time there and the group has been chummy ever since.

Kessler traveled to Mexico on the day of the attempted kidnap. Jay Duke on the other hand wasn’t so lucky. His trip to Costa Rica was delayed and so the team was able to arrest him at the airport. They questioned Duke. They even made it out that his friend Hendricks had informed him and that got Duke talking. Duke said that he and his friends only meant to scare Connor.

They were never going to kidnap him and so that’s when Pride put it together. The person who hired these guys was Sasha. Sasha made it out that Connor was in danger and that gave her enough reason to take Connor and start over fresh in Witness Protection. In a way, Connor had been the one to first doubt his mother.

Connor had told his father that his mom was never going to change because wolves will be wolves. Pride and Jimmy had told Connor that anything was possible and maybe there was a chance for Sasha but now Pride knows better. He later confronted Sasha. She didn’t admit it out loud. All she was willing to say is that if Pride brought this to the FBI then Sasha would go to prison and she would be killed there.

Then Connor would blame Pride for what happened. Sasha knew Pride would never do that to their son and so Pride told Connor. He told Connor what happened. He also said that the threat is real and that Connor will be safer in Witness Protection. Connor understood. He also knew that he was still going to go with his mother.

Connor said his mother needed him more than Pride does. Connor still loves his mother in spite of what she did and he didn’t want to leave her on her own and so that’s why he’s going with her, but Connor told Sasha he knew the truth and that he was going with her anyway. But first, he wanted to go to the wedding. Sasha hadn’t liked that. She told her son he didn’t owe those people anything and Connor told her those people were family.

He went over to the wedding venue. He met his Grandmother Mena and together with everyone else that cares about Pride and Rita – they watched the wedding. Rita wore a red dress because this is her second wedding after all and she also wore the earrings Mena gave her. And Dr. Loretta Wade officiated at the wedding.

The wedding was beautiful. The couple also had a blue Cadillac waiting for them after the ceremony and they drove to their reception at Pride’s bar. The party was in full swing when Sasha texted Pride that its time. Sasha later came in and she saw Connor dancing with Rita and that created a shift. Sasha didn’t collect her son. She didn’t even go into the building. She saw how much fun Connor was having and she walked away. She also walked away from the US Marshals. She was in the wind and no one knew where she would land. And now Connor was going to be raised by Pride and Rita.

Another thing about the wedding, Carter, and Khoury became official. He wore a tie to match her dress and he also walked away from a position in Japan because he wanted time to see where their new relationship goes.