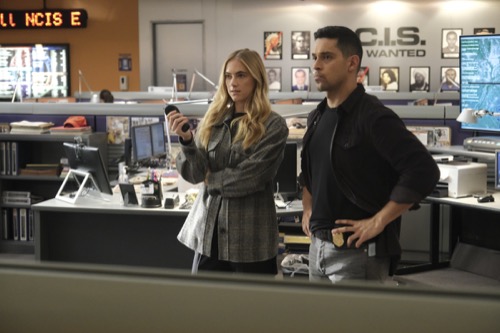 Gibbs accompanies her on a trip to find a group of girls who were kidnapped from the bus; a hacker emails compromising information to the Taliban.”

Also, she would be bored on the beach. She mentioned moving to Costa Rica and she said she wanted to try something new but she went back to her old self the second and forgot all about her plans when she found out about her good friend Darya. Darya had been a captive with Sloane. She was the one the terrorists used to bring Sloane food and water. Darya also treated Sloane after she had been tortured. Sloane owes Darya everything for keeping her alive and so she felt compelled to help once she learned that Darya had been kidnapped.

Darya hadn’t left Afghanistan when Sloane did. She chose to stay behind after they had been rescued because she wanted to continue the fight and help in any way she could. Darya eventually became a chaperone to a group of girls. The girls were taking secret routes to school every day and so Darya was there to both act as the appropriate adult as well as to protect the girls if something ever happened.

The country was still dealing with the Taliban. The Taliban doesn’t like the idea of girls going to school and they do everything to stop them. This is why the routes to school are secret. The Taliban shouldn’t have known where the bus was going to be that day and yet somehow they found out and they waylaid the bus. They killed the driver. They kidnapped the girls and they kidnapped Darya as well.

Darya left behind a message before she was taken. Darya wrote on a window “Sloane, NCIS”. She wanted to get the word out to her old friend that she had been taken and Sloane did get the message. Sloane also told everyone that she was flying to Afghanistan to go rescue her friend. She was going to take this trip on her own time if possible because she was so set and so Gibbs chose to go with her.

They left Sloane’s fish with Torres. They mentioned to him that they were going to be out of town and the team only learned the full story from Director Vance. Vance thought it was a security breach that the Taliban learned of the school route. He directed the team to investigate from their end and they found something or more specifically someone. They found a connection who was sending messages to the Taliban from the United States.

Torres and Bishop later broke down the man’s door. Only there was no need for it because their suspect was dead and so the two of them went looking around. They soon learned their dead suspect was into Green Energy. He had several posters about saving the earth and it didn’t appear as if he had Taliban ties but the team did find the coordinates to where the bus was abandoned.

It turns out their Albert had been assisting the Taliban. The Taliban also took the girls for a reason because Sloane and Gibbs later learned that the terrorist group was auctioning off the girls and Darya. They even left one girl go because she has epilepsy and they didn’t think they could sell her for top price. And so the team had to find these and they had to find them fast before they were sold.

Back in the US, McGee found out their dead suspect was Albatross. He used to be a chief hacktivist as in he hacked people for the greater good and unfortunately Albert dropped that after his partner went to jail for hacking. Albert was good at what he does. He started to sell his services and his firewall was just too strong for the likes of McGee. McGee tried to break through it.

He and Kasie did everything they could on their end but time was wasting and Sloane made it further in her investigation than they did back in the States. Sloane and Gibbs talked to the girl who had been released. They spoke to her and she said that Darya was the one who picked their route. Darya picked a route that wasn’t in the network. It made no sense that Albert would have gotten his hands on it on his own. He had to have been given the information and the chief suspect was Darya.

Sloane hadn’t wanted to believe that of her friend. She felt Darya must have had a reason for giving the driver a new route and so she was withholding judgment. She still thought Darya was innocent as they found Darya’s necklace in the desert. She remembered it because Darya used to wear it when they were captives together. Sloane said that Darya left it behind for her because she wanted to be rescued and so that’s

when Gibbs told her what he thought. Gibbs reminded her that captives don’t usually get to keep their own jewelry. He also said that it seemed like a trap. He thinks that Darya was leading them into a trap and that some of Sloane’s old enemies might still want her head. It was just the two of them in the desert looking for the girls because Vance didn’t get the go-ahead for troop support.

If anything, Vance learned that Washington didn’t want to interfere with this case because they believe Afghanistan should deal with its own issues. Vance couldn’t assist Sloane and Gibbs any further and so the most they had was their own team. McGee shut down the terrorist’s bank accounts. They were trying to stop the sale and unfortunately, it just made the terrorists angry.

Darya was later thrown from a moving vehicle with a message pinned to her. The message said “Go home or there will be more blood” and it was written in English meant the message was for Sloane and Gibbs. This confirmed to Sloane that her friend had been innocent. Darya was killed when she threw at such speed and so Sloane wanted things to end there. She didn’t want to keep looking for the girls because she didn’t want anyone else to get hurt.

Sloane just wanted to go home. Or at least that’s what she told Gibbs but he later found her loading up on weapons and he realized what her real plan was. Sloane wanted to go rushing into the scene. She wouldn’t have done so if it hadn’t been for Gibbs and Gibbs stopped her because he hadn’t wanted her to die. He told her that she would die if she went rushing into things without thinking.

He stopped Sloane and it’s a good thing too because they found out who really sold the bus route. Their friends in America helped them out. McGee learned from Albert’s old partner that some man in the village offered up the bus route and this man was the only other person who Darya told. He had hated that the girls were learning English and math. He also hadn’t cared that he sold them into slavery. Sloane and Gibbs beat the man up for information and he happily told them where the girls were being held.

Sloane and Gibbs were able to rescue the remaining girls. This ended up meaning more to Sloane than it did to Gibbs. Gibbs had thought of it as a one-and-done sorta job and Sloane hadn’t. Sloane wanted to stay in Afghanistan. She wanted to help fill the role that Darya left behind in honor of her friend and so Sloane was still going to leave NCIS.

And this thing between her and Gibbs was never going to happen now.