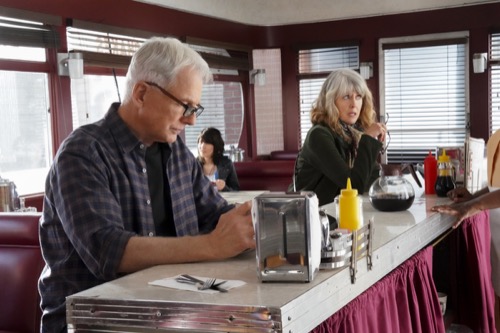 Tonight on CBS NCIS returns with an all-new Tuesday, April 6, 2021, season 18 episode 11 called, “Gut Punch” and we have your weekly NCIS recap below. On tonight’s NCIS season 18 episode 10, “Watchdog,” as per the CBS synopsis, “Vance assigns McGee, Torres, and Bishop to COVID compliance duty at a foreign affairs summit, where they discover a link to another NCIS team’s murder case.”

In tonight’s NCIS episode, there were bound to be repercussions for the team. They had lied after all to a federal agent to cover up something Gibbs did, and so Vance couldn’t allow them to get away with it. He suspended Gibbs. He now has to punish the rest of them. Vance assigned the team to COVID compliance duty at a foreign affairs summit and those things were the worst. They came with so many pitfalls.

The team couldn’t risk causing an international incident and they also couldn’t even attend any of the cool events. The team knew instantly that they were being punished when they were given this assignment. They got COVID compliance while others got to attend the new Secretary of Defense and go to his dinner for the Yemeni Foreign Affairs Minister. And so not only were they being punished but now everyone at NCIS knows they’re being punished.

Gibbs’s team was once known as the dream team. They all the great mysteries and the biggest budget. However, they were passed over in a recent case that came up because Vance wanted them to be compliance officers. They were therefore getting their punishment and no one told Gibbs. They didn’t want to worry the boss. They just carried on with the job all the while Gibbs was fending off reporters.

It turns out that reporters had gotten a whiff of a scandal at NCIS and they want the full story now. They’ve been asking Gibbs for a comment. One woman also cornered Gibbs at the diner and he thankfully saw her coming because he had seen her picture in the paper. Gibbs didn’t want to talk to reporters. He also didn’t want to make a fuss about his suspension.

Gibbs just wants to take his punishment on the chin. He knows that he’ll go back to work and so he’s willing to wait for his suspension out. His team on the other hand weren’t as optimistic about their own punishment. They all hated setting up the COVID body temp readers. No one respected them and it was eating at them that they weren’t working the case that came in. It was a murder investigation.

Marine Lance Corporal Jesse Flint was killed and his body was literally dumped in a dumpster. Flint was days away from being dishonorably discharged. He was also awaiting charges for domestic abuse against his girlfriend and so he wasn’t a good guy. It was clear why someone murdered him. Another team had been assigned his case and unfortunately one of the other guys was Sawyer.

Sawyer was the world’s most annoying man. The team all hated him because he had a chip on his shoulder about them getting all the great cases and so Sawyer was getting his revenge now. He boasted about how it was his team that was investigating Flint’s murder. He even went as far as to say he was now the A team and Gibbs’s crew were the losers.

Which they resented. Bishop, Torres, and McGee couldn’t help getting information on the case because they all wanted to know what it involved and Torres had seen the body. Torres spotted a paint mark on the body. He didn’t know what it was from and neither did Palmer. And so it wasn’t until Torres had seen a similar paint mark on McGee that he realized Flint had been on the SECDEF’s property.

The team spoke about this within hearing distance of Sawyer who told them there was a reasonable explanation for it. Sawyer said that the victim worked as a part-time handyman and that he worked all over town. He then added that he and his partner have got a great suspect. Flint’s

ex-girlfriend skipped town around the murder and she was being tracked as they spoke. Sawyer told the team that he got this. He also said that they should be focusing on their punishment because it wouldn’t look good for them if he went to Vance and complained about them. Only this didn’t stop the team. They continued to work the case on the side and so they later confirmed that Flint had been working at the new Secretary of Defense’s property.

SECDEF’s aide Miles Thatcher was the one to confirm it for them. He said that the house was going through extensive remodel ever since a new administration took over and that Flint was one of many that were hired. The team next checked Flint’s items. They found a hypodermic needle in his possessions and it couldn’t be explained. Flint wasn’t a paint wizard. He didn’t mix his own paints and he had written down a paint name that couldn’t be found in any brand of paint. Bishop figured out that it wasn’t painted. It was a location and she later visited it with her team. The three of them found a workstation and it was clear by what they saw that Flint had been casing the joint at SECDEF’s and not working as a handyman.

Flint had a stockpile of weapons. He also rigged his hideout to blow and so the bomb squad was called. Vance was also called while they were at it. Vance received a report from the team and they told him that Flint was a hitman. He was hired to target the new Secretary of Defense dead. He had been paid by someone and they weren’t sure if the hit was called off once the hitman died. The team told Vance that they’ll continue investigating, but he told them not to do it. He reminded them that they once again stepped out of bounds of what they’ve been assigned. He wanted them to hand over everything to Sawyer and his partner Tyler and the team were to take orders from their fellow NCIS Agents.

Sawyer was deeply upset when he later found out what Gibbs’s team did. He too reminded them that not everything is about them and that there were other NCIS Agents working in the building. Each and every time Gibbs’s team messed up, they all had to deal with the repercussions. He was sick of having to clean up after them and he told them as much. Sawyer and Tyler gave the team their new assignments. They were to do the grunt work.

Sawyer and Tyler meanwhile continued to investigate and so did the team. They again ignored protocol. The team learned that the musician hired for the party at SECDEF’s property had a record he was trying to hide. They went to his home and they ran into Sawyer and Tyler.

The two other agents had also realized Kendle Radcliffe was suspicious. They went to his house and they found him dead in his bathroom. He had apparently killed himself with the same gun he used on Flint. Sawyer and Tyler both thought this meant their case was closed. The evidence all matched that threat was removed and so SECDEF went ahead with his party. Torres, Bishop, and McGee all had a gut feeling that the case wasn’t closed and so they visited Kasie.

They asked her if she found anything they could use. She told them the needle they found had traces of liquid potassium in it. It wasn’t dangerous on its own only it was dangerous to the SECDEF because he has a chronic kidney condition.

And so the team rushed to the party and they stopped the secretary from drinking his champagne. They later showed him how it could have killed him and they knew who did it, but the team left it to Sawyer and Tyler to break the news. They were given all the credit and they were the ones who did the debriefing with Vance. It turns out someone attached to the Yemeni Foreign Minister had tried to kill SECDEF to stop the alliance from going through.

And just as the team thought they finished everything, they learned that Gibbs spoke to the journalist and he told his whole story. Even the part that could cost him his job.