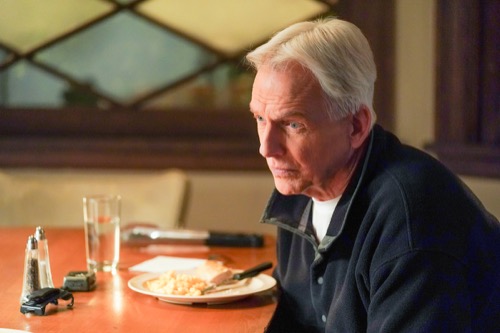 Tonight on CBS NCIS returns with an all-new Tuesday, May 4, 2021, season 18 episode 14 called, “Unseen Improvements” and we have your weekly NCIS recap below. On tonight’s NCIS season 18 episode 13, “Misconduct,” as per the CBS synopsis, “NCIS tracks a stolen laptop to the uncle of a young boy, Phineas, Gibbs’ former neighbor.”

In tonight’s NCIS episode, a delivery driver was working late at night. He was in fact making a delivery when the person who ordered decided to cancel the order and so he was heading towards his car when he found a dead sailor by it. The dead man was later identified as Navy Captain Strauss Tubman.

It was believed he was coming home when he was attacked by a thief and shot point-blank in the chest. The thief made off with the laptop case he was carrying as well as possibly his car. Tubman then crawled to a nearby vehicle where he died and was later found. But there was a problem with the victim. The victim worked at the NMCC otherwise known as the National Military Command Center and those were the people in charge of nuclear codes on submarines.

Tubman’s laptop was therefore very valuable. Tubman was given to NCIS to investigate and they made it their mission to find the victim’s laptop. Tubman didn’t just work at the NMCC. He worked with encryption researchers by helping encrypt the Navy’s nuclear code and so his laptop held his research. It’s also odd how the victim was found. He didn’t crawl towards the building or towards help. He went to a parked car.

The team joked about him possibly wanting something to eat and that’s why he went to a delivery driver’s vehicle but, jokes aside, the team didn’t really know why Tubman crawled in that direction. They later believed they found the shooter when they got a match for the DNA under Tubman’s fingernails.

The DNA was a match for Edgar Proust. He was dumb as rocks and he tried to deny being the shooter. Never mind the DNA or how the team found the murder weapon in Proust’s gym bag. Proust eventually confessed he did kill Tuban and that it had been an accident. They fought over the gun when it went off.

Proust had been paid to steal the laptop and he said whoever paid him was from the Middle East. He also added how they accessed some files that had the NCIS logo on them. Kasie traced the hack and she determined whoever hacked them had accessed files on Phineas. Phineas was the kid that Gibbs became close to. He also helped him to relocate after his mother was taken down for being a known criminal and one of the reasons he’s in hiding now is because of his uncle.

His Libyan uncle had tried to kidnap him. Hassan Sayeh put a million-dollar bounty on his nephew and now he’s managed to find him by getting to Tubman’s laptop. The team had to notify Gibbs because of his connection to Phineas. The two were close and Gibbs was genuinely upset when he heard about the threat to the young boy’s life.

He called Phineas’s cell phone. He got a state trooper. The state trooper was responding to the scene of an “accident” and he said only adults were found at the scene. Both were rushed to the hospital while there was no sign of Phineas. Phineas had been kidnapped and Gibbs was prepared to come off of suspension to find him. Gibbs went to the hospital where Phineas’s adoptive parents were.

Gibbs tried to speak with them. They were unfortunately in a bad way and both had been rushed into surgery. Gibbs couldn’t speak to them, but when he returned home, he found Phineas hiding in his house. The young boy had escaped his kidnappers. He then went to the only place he knew was safe and that was Gibbs’s. Gibbs treated Phineas’s wounds. The young boy had a cut over his eye and he told Gibbs what happened as he was being treated.

Phineas and his parents had come back from the mall when they saw two people running out of their house. They took off in the car and that’s when they were run off the road. Phineas’s mother told him to run after they crashed. He did and he didn’t look back to see if anyone was chasing him.

Phineas went to Gibbs because he didn’t think his evil uncle knew about Gibbs. Which thankfully he doesn’t. Phineas was safe and Gibbs later informed the team that was the case. Gibbs and Phineas were catching up while the team was looking into his uncle Hassan. There had been chatter coming out of Libya and they tracked Hassan back to town. He was working with four others to get his hands on his nephew.

The team was tracking him down but often their personal issues kept coming up and everyone was talking about Bishop and Torres. The two were flirty with each other. Everyone saw it and they questioned when the two of them will finally have the “talk”. They talk of where they seeing their relationship in the future.

They were coworkers. They were also friends and so Bishop didn’t want to risk it by dating Torres. Torres was also resistant to change. Neither of them wanted to jeopardize what they have by seeking something more and so they’ve decided to just be friends. The two of them tracked Hassan back to a motel room. They went to this room with McGee and they found a young boy in a hospital plus his doctor. The doctor had been kidnapped from Libya to treat Hassan’s son Ahmed. Ahmed was suffering from a rare form of leukemia. He needed bone marrow to survive and that’s why Hassan wanted his nephew. He needed Phineas to save his son’s life. He could have asked Phineas or Phineas’s adoptive parents and instead, he reacted with brute strength because that’s who he is.

Hassan will always choose violence. He even kidnapped a doctor to treat his son and fitted with him an ankle monitor so that he couldn’t leave the motel room. Hassan’s men had found out about Gibbs. It’s why they weren’t at the motel when NCIS arrived and so the team informed Gibbs. He laid a trap for Hassan’s men. He captured them and with Phineas’s help, he also captured Hassan. Hassan told Phineas about his son Ahmed before he was taken away. Phineas had been so moved that he later chose to donate his bone marrow to help his cousin and so truly all Hassan needed to do was ask.

Phineas’s adoptive parents are going to be okay and his mom told him he could get the dog he always wanted. And so Gibbs gave Phineas Lucy.

The dog Lucy had taken a liking to Phineas and it made sense for Gibbs because he likes his solitude.