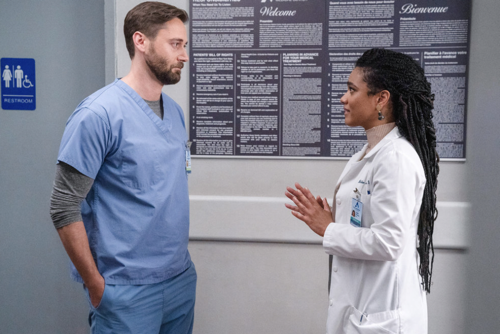 Sharpe is overwhelmed while tending to a family matter; Reynolds tries to keep his composure while treating a dad and son.”

In tonight’s New Amsterdam episode, Max sees Karen in the hall and she tries to run from him, she tells him that he just wants money. He says he wants to address systemic racism, he needs to hire someone. She tells him to go away, they already have someone.

Max goes to see Isabel, the Chief Equity Officer, and he tells her that he is there to discuss some disturbing statistics, according to the latest report by health and human services, he gives her all the statistics that he has. She tells him that her statistics are a bit generic. She says she leaves messages for him once a week, to get time with him, she has been there for three years. He is surprised, he tells her he wants proposals, think big.

Helen is walking with Cassian and she tells him that she has been made executor of her brother’s will.

Iggy is with a patient, Ollie, he has a sore hand and says he fell. Iggy looks at it and gets Xrays ordered to make sure nothing is broken.

Floyd gets a call from his mother regarding his pills, he tries to help her on the phone. Superman comes into emergency with other people, some of them dressed up as well and they have various injuries.

Helen gets a call from Mina, her niece and she is upset that Helen is sending to live with family in Dubai, which is very far from Tehran. Then, Max walks into Helen’s office, he says he is resigning as Medical Director and she is taking over, he wants to quietly recede into a supporting role. Helen says no.

Back in emergency, superman is everywhere trying to help out. There was an accident, superman got hit by a bus and took it like a champ, says one of the patients.

Iggy meets with Juliette, another patient, she says she hurt Ollie, he insulted her family and she took the vow of the Samurai to the death, she is just joking. Iggy gets upset with her and tells her that this is not a game. He apologizes for raising his voice, she tells him it was very unprofessional. He asks her to tell him one true thing about Ollie’s hand. She says Louisa did it.

Superman gets an MRI, he has a brain bleed.

Max starts by going around the hospital and takes off/removes anything that he deems to be racist. Floyd walks in the hall and slips on wet paint, Max is painting black lives matter in yellow on the floor. Floyd tells him why not start with fixing that black doctors get paid 35% less than white doctors, in their hospital.

Superman is going into surgery, Lauren tells him that being a hero has nothing to do with size.

Iggy is sitting with Louisa, he asks her if she hurt Ollie’s hand, she says no. He tells her that Juliette said she did, she says if she said she did it, then she did. Iggy then looks at Louisa’s hand, it looks like Ollie’s hand. She says Juliette didn’t hurt her, she is her friend, her only friend.

Max calls in all the highest-paid doctors, into the 4th-floor storage room and asks them to take a 10% reduction to spread around to the doctors of color. Lauren brings up the fact that the age gap is bigger for women. The doctors leave.

Floyd is in surgery, the boy dies and he won’t call it, he tries to massage his heart. They put him on bypass and they go downstairs and tell his father, he needs a heart transplant. Being on bypass puts him on the top of the donor list. The father says he loves his boy more than anything in the world and he wants him to hope that another boy dies so he can be saved.

Max apologizes to Helen, he tells her that he has a better proposition, she can be his partner, a co-Medical Director. She tells him to stop talking. She tells him that he can’t come up with a quick fix because systemic racism is not about him, but he wants answers, then hold still, be quiet and just really listen to the people that he says he wants to help. It is not revolutionary, outside the box, and it will not be a quick fix. If he can’t handle that, then he shouldn’t be helping.

Iggy has Ollie, Juliette and Louisa. He tells Juliette that she lost the game, she can’t stay there anymore and he is going to have to call her parents. She tells him that he is the one that lost. Iggy says she hurt Louisa, and when Ollie found out, she hurt him too. Louisa says it start when Ollie kept trying to hold her hand and she told him to stop.

Mina calls Helen, she tells her that she wants to go to New York. Helen says it is complicated, her job is all-consuming, her apartment is not ready for a kid, and New York is a big city. Mina tells her that she doesn’t have room in her life for family, that is what her father said and he was right.

Lauren goes in to see superman, the bleed did too much damage, he is on life support, he is not going to make it.

Iggy goes to see Juliette and tells her that he owes her a huge apology, he says he is very sorry that he found her guilty before she even stepped into his office. He says he should have more faith in her progress. She says she taught Louisa how to defend herself, she is her friend. Iggy says a new rule to the game, she helps anyone hurt someone else, if she does, she loses.

Helen is sitting with Max, he tells her that he is grateful that she is there. It has been hard but has been easier, knowing that she is here. She tells him that she is stepping down as deputy medical director, it is poor timing, the job has meant so much to her. She has to focus on other things right now. He says ok. She thanks him for listening.

Floyd tells Lauren that he is sorry about superman. She shows Floyd superman’s card, he opted to be an organ donor. Lauren walks him down the hall for surgery, all the staff stand on both sides of the hall, and watch with respect, his father helps to wheel him in as well. The heart is used for the other boy who was on bypass, it is a success.

Helen tells Cassian that she told Max she is stepping down because Mina is coming to New York to live with her. She says getting to know her family feels right. She tells him that if she is going to do this, she has to put her whole self into it. Everything she has has to go to her. She tells him that it is not about her anymore. Cassian kisses her on the hand and walks away.