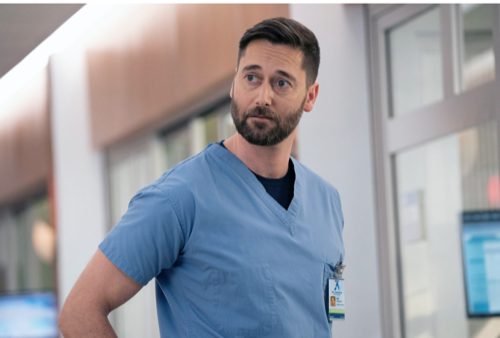 Bloom must deal with an overcrowded ED; Sharpe helps Dr. Agnes Kao with a gut-wrenching diagnosis; Reynolds finds himself experiencing something new on the job.”

In tonight’s episode of New Amsterdam, the miracle of childbirth is a beautiful thing. All new parents remember the moment their child was born and it was a happy occasion for many of them. However, there were instances that took away from the moment. Black and African-American women have a higher mortality rate when they deliver than their white counterparts and not to mention the other many things that could go wrong.

Like strokes or emergency hysterectomies or even cancer. A new mother at the hospital by the name of Nia was so happy to give birth but then she couldn’t move her arm and so she had to be tested. Nia has thyroid cancer. She needs to take aggressive action because the cancer was fast-moving and so that meant she had to isolate away from her family. And she needed to do it now.

It was usually women of color that got the worst post-natal treatment. Evelyn Davis knew that when she went into labor and that’s why she decided to go to the hospital with the best rates in the city. New Amsterdam was a great hospital. Evelyn Davis is also a lawyer and she’s shut down several departments around the city.

No one wanted her to do the same to New Amsterdam. They wanted to handle Evelyn with kid gloves but Evelyn has a lot of demands. She was demanding a vaginal birth. She had a c-section with her last pregnancy and she had hated how she was treated by the doctors. It was the doctors that convinced her to take medication. They told her it was to induce the baby and so she took it. And later she took the epidural as well.

Only it went nowhere. Evelyn’s doctor at the time eventually decided to rush her into an OR and her husband barely got there in time to see their son born. Their son was healthy. He’s now a little boy and his parents love but they hated their delivery experience. Evelyn did a lot of research when she got pregnant again. She thought she could talk the doctors into giving her the vaginal birth she wants and that’s not how this works.

The doctors have to check for markers. If the markers were low, then it wasn’t optimal for the baby to be delivered vaginally and Evelyn was already starting with a lower number because she’s black. It also hurts her case that she had a c-section. A vaginal birth after a c-section was rare because often the doctors didn’t want to take such a risk.

Max talked with Evelyn. He thought he got her to understand how her wants don’t mean anything if her body can’t handle a vaginal birth and so Evelyn got upset. She signed herself out of the hospital. She and her husband were leaving when Max caught up to them. He tried to talk them into staying. He even gave them the numbers and Evelyn’s husband said his black wife isn’t in the numbers. The couple was still going to leave when Evelyn began bleeding.

Her situation took a turn for the worst and so she had to be rushed back into the hospital. Max paged for Bloom. She was handling a pregnant woman in the ED and the pregnant woman was another troubling case. The woman was claiming she couldn’t be pregnant because she was a virgin.

The woman whose name is Ydalis was heavily pregnant. She was actually in labor because she got into a fight with another woman at the shelter and so she needs to come on board because her baby was coming. Her doctor called for Iggy. He needed to provide a psych consult and he wanted to get to the root of why Ydalis was in disbelief. He started talking to her. He got her to admit the last time she felt in control was almost a year ago and he would have gotten more from her but the baby was coming. OB took over. They rushed Ydalis to a room and they tried to get her to cooperate in the childbirth. She refused to. Iggy had to step in and he told her that she wasn’t pregnant. That she was right all along.

Iggy told Ydalis she had a blockage. He asked his friend to help with the blockage and then together they convinced she needed to push as if she was pooping to get rid of the blockage. This made Ydalis cooperate with childbirth. Even if it was by accident. Her daughter was later born and the baby’s cries forced Ydalis to face the truth. She immediately turned on Iggy. She asked him “what did he do?”. She began saying the word “no” over and over again. Ydalis couldn’t believe she gave birth. She later confessed to Iggy that she had been raped on numerous occasions by her stepdad’s brother. She had been staying with the brother because her mom had needed space when the lockdown happened and so she suppressed the memory when she fled her “uncle’s” house.

This is why Ydalis didn’t want to acknowledge she was pregnant or that she was no longer a virgin. Iggy was going to work with Ydalis and the doctor was going to do what he did best. Max also did a great job. He decided to ignore what the VBCAPS was saying and instead he relied on what Evelyn was feeling. They changed her status in the test to white. It was technically fraud but it got her scores up and she was able to later deliver of a healthy son. Evelyn’s case convinced Max that they needed to do away with the VBCAPS test. It was inherently racist because it gave women of color lower scores than white women and so Max didn’t want to work with that test again. And while Max did some great, Iggy too did his job when he found adoptive parents for Ydalis’s baby.

Ydalis couldn’t raise the child. She was still too traumatized and so this way the baby is at least going to a couple that wants her. Then there was Sharpe. She took that when she took her niece in that she would have this great relationship with the teenager and it could almost be mother/daughter like but the teenager is never home. She doesn’t eat breakfast and so Sharpe couldn’t cook for her. And the only time Sharpe saw Mina was when she ran out of fair for the bus and needed a ride home.

Reynolds meanwhile delivered a baby. He was removing a burst appendix when he was forced to deliver a child to get to it and so Reynolds too got to enjoy the miracle of childbirth.

But Bloom got in trouble because of her friend. The one she was letting sleep at the hospital and now that they couldn’t do that anymore. And so she invited her friend to be her roommate.