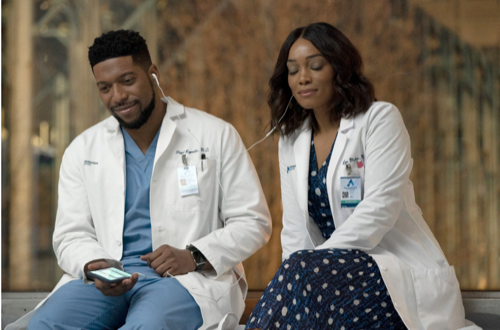 Sharpe decides to take a stricter approach to parenting her frustrated teenage niece. Iggy tries to connect with a patient desperate to have gastric bypass surgery.”

In tonight’s New Amsterdam episode, Leyla has learned she has passed her boards tanks to Lauren. She kisses her. Lauren is uncertain and leaves the room, telling her it is okay. Meanwhile, Max speaks with a teacher who has a blood clot. She wants to leave the hospital. New Amsterdam means death to her and her people. Max tells her she needs a heparin drip. She doesn’t care about what the hospital has done to her people, the indigenous people.

Max tries to speak with the board and talk them into changing the hospital’s name. The board thinks he is crazy as well as Kerri. Meanwhile, Iggy meets with Saffy. She wants his signature for gastric bypass. Her mom won’t sign and she is sick of looking like this.

Lauren and Floyd’s help bring another man to their patient’s room who says he is a boyfriend. Helen shows Nina what she needs to copy and scan into the hospital’s database when Max stops by to share he wants to change the hospital’s name. Helen isn’t surprised by the reaction of the board. They are also both tongue-tied and stuck for a clear explosive as to whether they dated when Nina brings it up.

Later, TV cameras and crowds of demonstrations appear at the hospital to demand a name change. Iggy tries to help Saffy who points out that he is on a diet. Floyd tries to figure out what a song meanwhile thinking about poly relationships. He asks Lauren what she thinks.

Lauren and Floyd’s patient has increased trouble breathing while Max begs the patient to let her let him help. He tells her how they will rename the lobby but this isn’t enough for her. Meanwhile, Lauren and Floyd learn their patient has another wife. She has all of the power to help her husband and sign off on health measures.

Agnes and Helen discuss how evil Kapoor’s replacement is. Agnes admits she hired her and she isn’t even on the board. Max tries to find a native American doctor while Floyd meets his patient’s real wife. He sees her hands. They are similar to red cuts. She tells him they have parrots.

Saffy and her mom leave Iggy with her signature to have surgery. Iggy feels like a failure for bringing up his own weight issues. Max’s patient begins to code. He is confused as to what to do. She mentioned dying for her legacy.

Agnes realizes she has the authority to fire Kapoor’s replacement and does just that. Max help his patient and also creates a program for Native Americans. Floyd helps his patient decide who he really loves. After he spends some time with his new love interest. They listen to music. He realizes she is wearing a ring.

Helen checks on Nina, who is crying after reading several files. She knew some of the dead and she cannot forget. Upset, Helen heads to the roof to decompress. Max arrives. They hug after he says sorry about Cassium. They appear to almost kiss until she tells him she is glad they are friends. Lauren arrives home and kisses Leyla back!