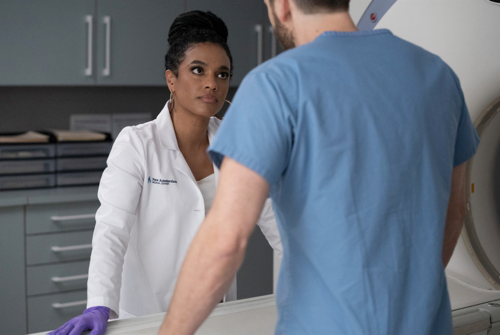 Bloom returns from vacation. Reynolds treats a young patient with a deadly heatstroke. Iggy discovers a dangerous situation with a former patient.”

In tonight’s New Amsterdam episode, Max wakes to see his daughter. The city is hot and every year it works worse, he tells her. Lauren is still in bed with her new love interest after taking some time off. She hasn’t done this in a long time. Iggy pays a visit to Chance and tells him to stay away from him and his husband. He threatens him with the police.

Lauren arrives back at work refreshed. She tells Casey how much she appreciates him. He is surprised. They enter the ED. It is filled with overheated, dehydrated patients. She remains calm and happy. They are all shocked.

Floyd is walking to work when he hears yelling. A kid is trapped in a car. He smashes the windows and takes him out. He runs with him to the ED, They rush him to the OR.

Max holds a meeting with his staff. He wants to conquest global warming within the hospital. He has put together a program. He discusses 1 box of gloves a day per department. They think she is crazy.

Iggy meets with a patient who says he can control the weather with his mind. He tells Iggy he has created this heatwave. Iggy asks if he can scan him, making it sound like a favor. The man agrees.

Helen meets with a sister who is freezing in this heatwave. Helen gets mad when she sees Walsh ordered 1 of the 4 tests she wanted. She gets mr=ore annoyed when she cannot use more gloves. Meanwhile, Floyd works to save the boy who is overheating. His father is brought into the OR. It’s a fellow surgeon who has been stressed out.

Max and Helen go toe to toe over his glove mandate. Max sees Iggy who is committed to his gloves off the program. Later, Iggy’s patient’s scan comes back all clear while Floyd saves the boy. He talks with the father who cries. It was a mistake.

Helen learns her nun has endocarditis. She goes into VFib. Helen tells Lauren she has gone soft and it is putting patients at risk.

Iggy runs into Max who has now changed the cafeteria menu. Iggy is upset there are no burgers. Iggy is down to change the planet but he needs to eat.

Floyd gets a call from his sister. Their mom’s blood glucose is too high. He realizes that he has been giving her expired insulin. Meanwhile, Iggy tries to get his patient to stay for a while. He lashes out at Iggy and his brother. He tells them he will make it rain. It rains! They are in shock.

Helen realizes she misdiagnosed her patient while Lauren finally loses it. She demands Max help her ED. She is at full capacity. He goes off about global warming. She wants to help people right now.

Iggy’s patient comes out of surgery. He had a fistula in his brain that was hiding a tumor. Helen talks further with the nun. She learns she was in Panama years back. She has malaria.

Floyd speaks with child services about the father who left his son in the car. He made a mistake and needs to be forgiven. Max has an epiphany when he helps Jerry the janitor up the stairs. Max gives his people a speech about sucking it up, hating it together, and making the change they need to make. He coins it one last chance. They seem ok with this.

Iggy arrives home to see his husband and no kids. Their daughter comes in. She hit a ball and she is wearing chance’s hat. Iggy has a look of terror on his face.

Floyd sees his fellow surgeon with his son reading a book. Helen goes to pray. Lauren comes home to a candle-lit dinner. She announces to her girlfriend that she makes her soft and she needs to be tough and run an ED. Her girlfriend laughs. She needs balance. Lauren admits they cannot break up. They kiss. At home, Max turns on the AC while he hangs out with his daughter.