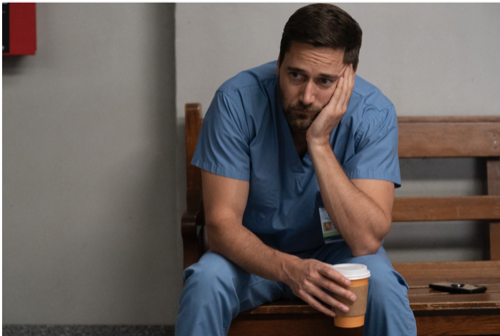 Tonight on NBC New Amsterdam airs with an all-new Tuesday, October 26, 2021, season 4 episode 6 called, “Laughter and Hope and a Sock in the Eye,” and we have your New Amsterdam recap below. On tonight’s New Amsterdam season 4 episode 5 as per the NBC synopsis, “Dr. Reynolds and Dr. Malvo have a heart-to-heart with Dr. Baptiste; Max learns more about Sharpe when someone from her past resurfaces; Iggy plays referee between two patients and their families; Dr. Wilder reconsiders Max’s offer to join the staff.”

In tonight’s New Amsterdam episode, Max and Sharpe are together. This means that Sharpe plays a role in his daughter’s life. She just helped to make the toddler breakfast and she’s been helping to do other things as well when she received a text message from an ex. This ex had played a huge role in her life. She did crazy things for him. She also was curious about why he was reaching out to her now and there was a part of her that wanted to be wanted. She wanted him to want her back.

She thought that’s why he contacted her out of the blue and it had taken a second text to clarify things. Her ex was contacting her because he was dying. He has pancreatic cancer. The cancer spread and they couldn’t do anything about it. Not with their current doctors.

Sharpe’s ex needed the best oncologist surgeon in the world. Luckily for him, Max has already met her. He brought in the surgeon and he was allowed to do so because Dr. Veronica Fuentes wasn’t there. She was out of the office. She’ll be out for days and so Max has taken the opportunity to say “yes” to everything while she was gone. He agreed to new monitors, more overtime pay, and even bring your cat to work day.

Max agreed to bringing in a mute doctor to perform surgery because he knew it was for Sharpe. He just didn’t know why. Sharpe hadn’t told him the patient was an ex-boyfriend and if anything she hasn’t been paying attention to him or stopped long enough to explain. She was focused solely on the surgery and making sure it went well.

Max, Sharpe, and Reynolds were later in the OR with the new surgeon as they removed organs from the body in order to remove the cancer. They were doing this while Iggy was dealing with a medical dilemma. Iggy found out that two of his living-in patients had started a relationship.

They’ve been together for six months and their relationship is physical. Which was a problem. No one in the program could have sex or enter a relationship with another patient or god forbid doctor. This plan was in place to stop victims of mental illness from being preyed upon and so that’s what Iggy told his patients but they didn’t care about the rules. They were in love. They were already talking about getting married. Both had been committed thanks to a conservatorship held by their families and so their choices aren’t their own.

It belongs to their families. Iggy had no idea how to pose this problem to their families and so he did it the best way he knew how. He set up a meeting with his patients Shane and Felicity. He brought in their parents to inform them about the relationship and both set of parents hadn’t liked it. They didn’t think their children were stable enough for a relationship. The parents wanted to end things and neither Shane nor Felicity reacted well.

They both freaked out. They got to yelling and Iggy had to call for backup and then the two calmed down. They calmed down the moment they held each other. Iggy and their families saw for themselves how dependent on each other they are. This could be a good thing and it could also be a bad thing.

t could be a bad thing because what would happen if they broke up or if the other’s mental health deteriorated? Both families worried about setbacks and they didn’t approve of the relationship. Yet, Shane and Felicity were consenting adults. There wasn’t much anyone could do to stop them from seeing each other or that’s how things normally would have worked. They were both under conservatorships.

This gave their families the power to remove them from the hospital and that’s what they were doing while Iggy tried to talk them down. Iggy tried to explain that two people in love shouldn’t be separated. He was just getting the families around to his thinking when he learned that both Shane and Felicity have disappeared. The runaway couple were later found at the hospital chapel.

The couple wanted to get married. There was nothing their families could say to stop them and so they went ahead with their marriage. Iggy also stayed for the wedding. He thought what Shane and Felicity found was beautiful. Their families thought the same because they didn’t stand against the wedding. Shane and Felicity were married. Their future was still uncertain right now but it looks brighter than it was before.

Meanwhile Reynolds was the one to tell Max that the patient was Sharpe’s ex-boyfriend Guillaume. Guillaume and Sharpe had been together back during their first days at the hospital. He was an artist, she a doctor. She used to help him with painting and so everyone whose been at the hospital from the beginning had known the lengths Sharpe was willing to go for the guy. She even dangled herself off the bridge to complete a painting for him.

Guillaume’s surgery was a success. Dr. Wylder had performed admirably and she agreed to fill Sharpe’s position at the hospital. As for Sharpe, she and Max discussed her ex-boyfriend and he was fine that she had a past. He just wanted to be there for her whenever she needs him.

Reynolds didn’t just drop Sharpe’s bomb on Max. He also came clean to his new girlfriend’s husband that they were seeing each other and Dr. Baptiste was no having it.

Bloom arranged for two men with physical disabilities to receive in-home care and it had been an up hill battle but absolutely worth it.