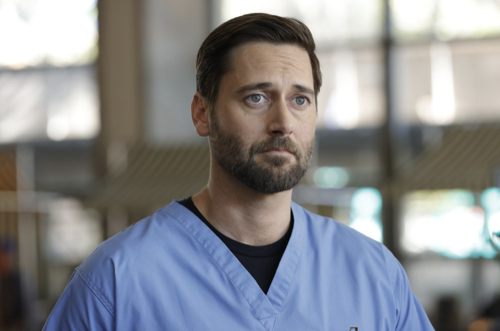 Tonight on NBC New Amsterdam airs with an all-new Tuesday, November 16, 2021, season 4 episode 9 called, “In a Strange Land,” and we have your New Amsterdam recap below. On tonight’s New Amsterdam season 4 episode 9 as per the NBC synopsis, “Max takes drastic measures to help several undocumented immigrants after a fire destroys the church where they had sought refuge; Sharpe and Malvo assist a patient with a life-threatening condition; Reynolds is conflicted about his new position.”

In tonight’s New Amsterdam episode, Lauren looks for a tool to take a baby carrot out of a child’s nose. Their tools are all over the place with the staff cuts. Meanwhile, Iggy has had a scheduling conflict since losing his head nurse. Max talks with Karen about Veronica. Their cafeteria is amazing but they are short on help.

A mass casualty has occurred. Lauren preps the ED. A number of people are brought in with oxygen problems, burns, and more after church fire. Max assures the pastor all are safe no matter their immigration status. Lauren calls Max to see the doors. ICE is waiting for the patients to leave. It looks like Max won’t be discharging anyone from the church.

Floyd and a colleague apply maggots to a teen boy’s legs to eat the dead skin so they can graph new skin after he was severely burned. Iggy talks with a young woman who is mad at Lauren Brough there back. She was talking to God.

Helen and Kia try to help a trans man who is from Nigeria. He needs a mammogram but doesn’t want to do it. Meanwhile, ICE is coming in. Max gets creative and turns the cafeteria into a church.

Veronica is angry Max has turned the cafeteria into a church. She wants them all out. Karen agrees with Max. There is a board meeting and she will find the votes to terminate Veronica’s contract.

Helen works with the trans man. He has a tumor she needs to remove. He asks for a double mastectomy. She contemplates.

Iggy speaks with the woman who was talking to God. He tells her she is having seizures and needs to take medication or it will get worse and she could end up with brain damage. She disagrees. And she doesn’t want the meds.

Max and Lauren have a problem as immigrants from all over the hospital retreat to the cafeteria. Max proposes opening a real church in the basement. The pastor loves Max’s compassion but they need a sanctuary and their own homes. Karen gets a number of votes.

Iggy helps his patient by having a quick service so she can pray for her brother in surgery. Then she will take her medications. Meanwhile, Helen sees while in the surgery operation on Temi, the trans man, that the tumor has spread to the chest wall.

Iggy’s patient has a seizure during their prayer service. Helen tells Temi after surgery he needs chemo. His cancer has spread. He doesn’t know what to do. He cannot dodge ICE for that long.

Max has a plan. He and some of the staff leave in ambulances. It makes Ice follow them and while they do all of the people escape and head back to their church.

At the meeting, the board is one vote shy of getting rid of Veronica and instead votes to oust Karen. Veronica elects a new board chair.